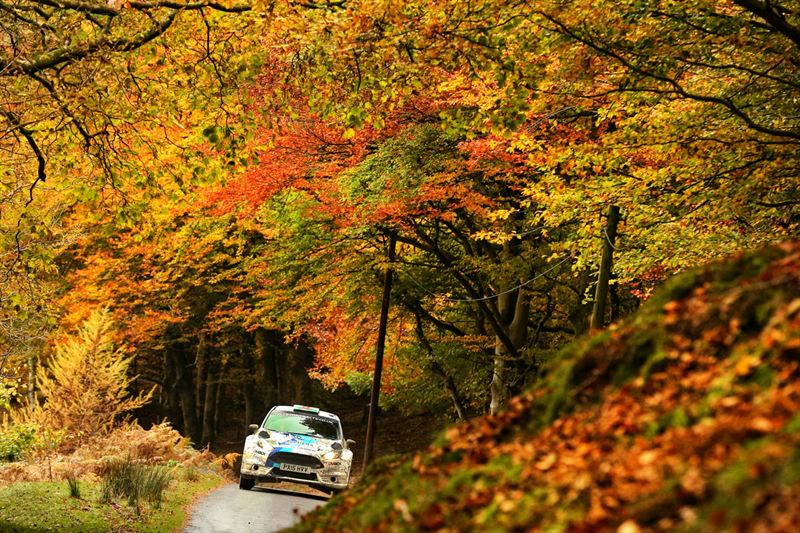 Osian Pryce’s challenge for Wales Rally GB glory ended early today with a hole in the radiator on his Ford Fiesta R5 – but nothing could dim the Welsh star’s enthusiasm for the speed he’s shown on his home round of the World Rally Championship.

Competing in the WRC’s main support series – WRC2 – for the first time, Osian and co-driver Dale Furniss achieved their aim of setting times faster than anybody else in a Fiesta R5.

After winning this year’s WRC-based Drive DMACK Fiesta Trophy, Osian had hoped to round his season off with a debut top-six in WRC2. He was on track for that result right up until he noticed the rising water temperature aboard his Fiesta.

He tried to repair the damage to the radiator using chewing gum, but it was impossible and retirement came at the side of the road.

“Of course it’s disappointing not to finish,” he said. “Dale and I worked on the car and did what we could, but we couldn’t stop the water coming out, even though the hole in the radiator was tiny – it must have been a stone or something which damaged a fin in the radiator. There was no other damage to the front of the car.

“We came here to see what we could do against some genuinely world-class competition in the WRC2 category. All you can really do is measure yourself against the crews in the same car as you and, I have to say, I’m really proud of the speed Dale and I achieved on our first outing in a class where the other guys have been fighting all season.

“We’ve had some issues along the way and without them I think we’d have been the fastest Ford reasonably comfortably. Next year, our DDFT win gives us two World Rally Championship prize drives in a Ford Fiesta R5 car and coming out here and pitching ourselves against the best in the world has really given me good confidence.

“If I can say I’m really disappointed about one thing in particular it’s not getting through Dyfi yesterday on the second loop. We had a problem with the power-steering, which was bad enough, but when I got to the end and was told we’d been two seconds per mile faster than [WRC2 winner] Esapekka Lappi in the first split, I was totally gutted. I couldn’t help but think about what we might have achieved without that problem.

“Even today, when we were having a clutch problem which seriously hampered us in the slower corners, I was pleased with the pace we showed on those three stages.

“On reflection, I’m delighted with what we achieved. We have shown we have the speed to fight in WRC2 and that makes me even more determined and excited about next season.”

Osian’s day in detail. His times against his WRC2 rivals:

SS20: retired before the stage, hole in radiator