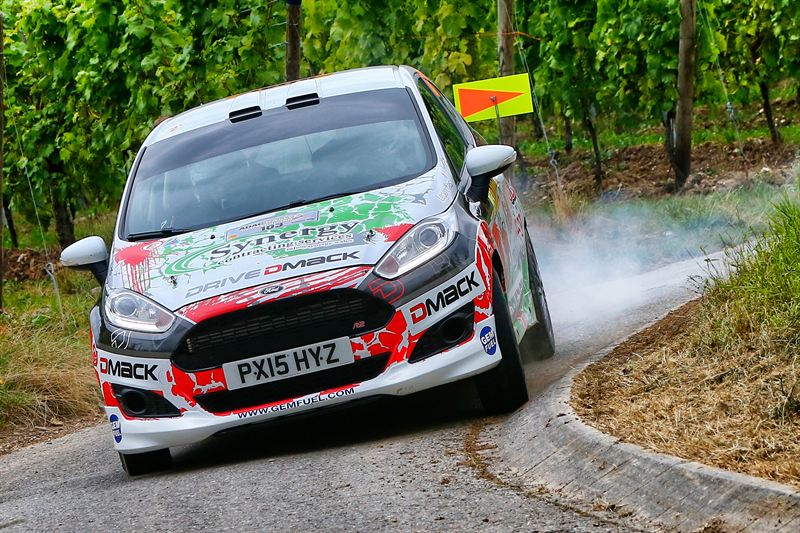 Osian Pryce will aim to re-write rallying history next week, by becoming the first British driver ever to lift the coveted Drive DMACK Fiesta Trophy (DDFT) title in the World Rally Championship.

For aspiring junior drivers, the DDFT remains the most valuable prize on offer in the world championship with seven rounds of the 2017 series up for grabs in a state-of-the-art, turbo-charged, four-wheel drive Ford Fiesta R5.

Welshman Osian and his co-driver Dale Furniss have already landed two of those drives next season and they go to next week’s RallyRACC Catalunya-Costa Daurada (Rally of Spain) leading the championship and looking to land a further three prize drives.

Osian said: “The way the championship is organised has changed for this year. In previous seasons the winner of the title took all seven drives, but this time the organisers have paired some of the rallies to spread the prize around. We took most points from Portugal and Poland, so we won the first one. Unfortunately, a small mistake in Finland cost me some points, but we were winning again last time out in Germany and that’s given me this great opportunity next week.”

A third DDFT win from five starts would be enough for Osian to be crowned champion, which would be comfortably the biggest moment of his career.

“This would definitely be the biggest win in my career,” said Osian, “this opportunity is just massive and something I’ve been working towards for such a long time.”

Next week’s Salou-based rally comes with the added complication of a mix of asphalt and gravel surfaces. Up until now the previous DDFT rounds have run solely on one or the other. That doesn’t worry Osian and Dale – they’ve won on gravel (Portugal) and asphalt (Germany) this season.

“I’m looking forward to driving the two surfaces,” said Osian, “it’s like getting two rallies in one. All I can do is go there and give it my best shot. Dale and I have prepared as well as we possibly could: we’ve done exactly the same as we have for the other rallies. Basically, if we go well on the rally and score well on the rally then the championship will follow. At the moment, the momentum’s with us – all we’ve got to do is keep it there!”

“I spent a day with Rob after Germany,” said Osian. “He’s a bit of a legend to be honest, he’s worked with lots of rally drivers and most of the world’s leading Formula 1 drivers. It really helped working with Rob, the basic message was about being as efficient as possible with the car.

“Basically, it’s about finding tenths of seconds. These rallies are so close between all the DDFT guys, every tenth of a second counts. One tenth could be the difference between getting a bonus point for a stage win or not and that bonus point could be the difference between scoring more points than anybody else or not. Score more points and you take the title.

“All it takes is a tenth of a second.”

Osian and Dale start the biggest rally of their lives in Barcelona on Thursday October 13.

Osian and Dale will contest five rounds of the World Rally Championship in the Drive DMACK Fiesta Trophy. Here are the details and an Osian download on the big five.