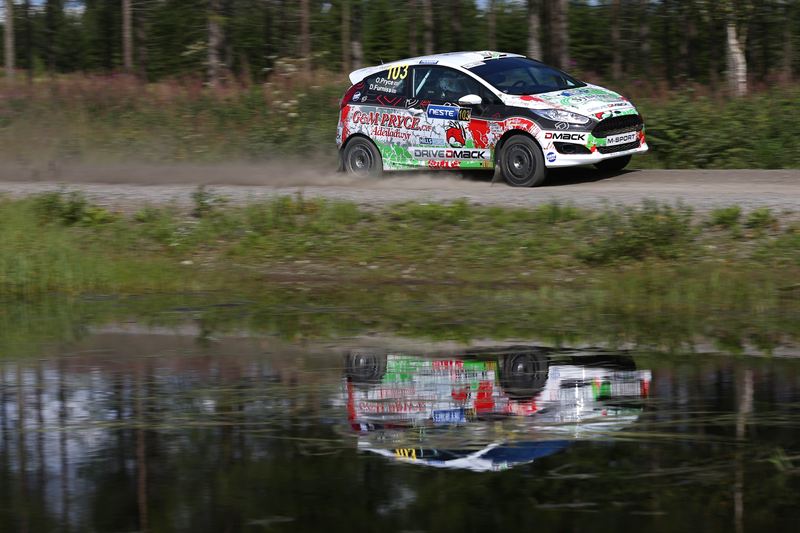 Despite never having competed on the world’s fastest rally roads, Osian stunned onlookers and locals alike with his pace on the latest round of the World Rally Championship. Only once out of the top-two stage times on the central Finnish roads, Osian and co-driver Dale Furniss have led the DDFT category for seven of the 12 tests run so far.

Driving his Ford Fiesta R2T, Pryce has loved his first day on the rollercoaster roads.

“We’ve had a very good day, probably better than I expected being a rookie here,” said Osian. “We’ve pushed hard in some places, had one pretty big moment and a couple of slides, but otherwise it’s been really enjoyable. The roads are fantastic and some of the jumps are incredible.

“The M-Sport boys have done a great job with the car, which has been perfect and the same with the tyres – the DMACKs have been just the job.

“It was quite rough in some places this afternoon and, I’ll be honest, I didn’t really expect that from this event. Some of the stages are quite soft and they’ve dug out a little bit and pulled some fairly big rocks. We’ve had to go off the line a few times to avoid them, but that’s the same for everybody.

“The plan for tomorrow is to try and keep the speed about the same and stay out of trouble.”

Tomorrow starts with the world-renowned Ouninpohja stage – a road so famous, Britain’s first world champion Colin McRae named his racehorse after it!

“Ouninpohja’s some kind of wake-up call in the morning,” smiled Pryce. “I can’t wait for that though – I’ve heard so much about this legendary road and I’m sure it’s going to live up to that billing.”

SS4: 4thfastest (2ndin DDFT) overdriving the car a little bit, trying to take too much speed

SS5: fastest (2nd in DDFT) tricky stage, but fastest after a good push

SS8: 2ndfastest (2ndin DDFT) careful after seeing the rocks in the road

SS10: fastest (leads DDFT) caught in some dust, has to stop in one place

Tomorrow: overcast with rain showers expected through the day.