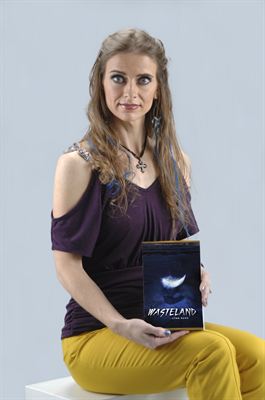 (Phoenix, AZ - February 23, 2012) – Tucson is anything but a literary Wasteland – even if it is one of the hot paranormal romance novels by Lynn Rush. Rush is the flagship author of Crescent Moon Press’s (New York City, NY) newest category – New Adult. Attendees of the Tucson Festival of Books will get a chance to talk demons, guardians and more paranormal lingo with Lynn Rush, an award winning paranormal romance novelist.

Rush says she writes paranormal romances for the New Adult audience whose ages range from 18 to 24. While New Adult fiction may not be the "hot and heavy" romance featured in novels for adults, it’s a touch warmer than the “sweet” romance of the young adult novels.

“There’s a lot that can happen when you’re eighteen or even twenty five years old. The fact is that those same events feel very different at that age than they do when you are twelve years old – or forty years old,” explained Rush. “Because I write Paranormal romance, sometimes my characters are centuries old - but their human contacts are in the new adult age range.”

"Crescent Moon Press is excited and pleased to announce a 6 book deal with author Lynn Rush.  Her novels are ground breaking in the 'New Adult' genre and we believe Lynn will have a strong and sustaining presence in publishing," said Marlene Casticato of Crescent Moon Press.  "We're very excited to open our New Adult line with Lynn as our genre breaking author.   She is a fresh voice and a dynamic author."

Stephenie Meyer's best-selling Twilight series has been the biggest story in publishing for months. But with no new Meyer title on the horizon, young adult fans are quenching their thirst for paranormal fiction by turning to other authors like Lynn Rush. Rush’s novels center on young adulthood - but it isn’t necessarily ‘chick lit’ either. In fact, Rush’s protagonists are male and the story is seen through their eyes with strong characterization, well developed plots and action-packed storylines.

“WASTELAND is a fast paced, sexy, romantic tale with characters who instantly capture your attention…and your heart,” said Rebecca Zanetti, author of FATED. “The hero is honorable and darkly tormented, while the heroine is idealistic and strong. Lynn Rush has created a world of good and evil—where nothing is quite as it seems. I lost myself in the story and truly enjoyed every minute of it.”

Rush isn’t necessarily concerned with labels, but does agree with the definition used by many of New Adult publishers.

“New Adult protagonists are most likely in the range of 18 to 26 years old,” Rush states.

Rush continues with the explanation, “Kids and teens focus on the present, while adults draw on their past experience to inform their present and future decisions. New Adults are somewhere in between…. That distinction might seem subtle, but it comes through loud and clear in the voice of New Adult Fiction.”

Lynn Rush will be joining other paranormal romance writers including Zoe Archer, Shayla Black, Vijaya Schartz and Shiloh Walker for an exciting literary weekend in Tucson.

About The Tucson Book Festival

The Tucson Book Festival, the fourth annual community event is organized to bring together authors, publishers and the reading public in an arena friendly to families. Net proceeds from the festival are used to promote literacy in Southern Arizona. They have already donated $500,000, earnings from the previous three festivals, to local literacy groups, including Reading Seed, The Literacy for Life Coalition (which is now Literacy Connects) and the UA for their literacy programs.

General Admission is free. Booths and exhibits are set up at the UA Mall, along East University Blvd, stretching from Old Main to east of Cherry Avenue, where a new Science City venue will be set up. Parking is free at all UA surface lots and in six UA garages: Cherry Avenue, Highland Avenue, Main Gate, Park Avenue, Sixth Street and Tyndall.   A Tucson Book Festival Guide listing all events for adults and children of all ages—over 400 authors, discussions, book signings and free programs for writers, a culinary tent, entertainment venues and 250+ exhibits—will be available from the Arizona Daily Star in the Sunday, March 4, 2012 edition. It includes a detailed map of the happenings and parking lots. To get your festival guide, call the Arizona Daily Star at 1-800-695-4492. Special attention was paid this year, at the 100th anniversary of Arizona’s statehood, to include authors and panels that reflect the people and culture of Arizona over the past century.

Driven to write, Lynn Rush often sees her characters by closing her eyes watching their story unfold in her mind. Book reviewers say that her plots are well developed, and the writing is strong and full of artistic details – stunning in both characterization and her action-packed storylines.  A prolific author who began her writing career in 2008 now has more than 25 novels to her credit. Six are currently under contract with Crescent Moon Press. Wasteland, first novel in the trilogy was released in July 2011 and continues to receive five-star reviews. Currently in the advance reader phase, the second in the series, Awaited is garnering rave reviews and scheduled for a May 2012 release.

Never planning on becoming an author, Rush says an idea for a new book may hit her when she's waking up or going to the grocery store.  One such idea came to her as she walked through a local bookstore. A girl wearing a blue tutu with a red leather jacket passed her. "She ended up in the opening scene of one of my novels," Rush laughingly explains.

Lynn Rush is a pen name that is a combination of two sources – Lynn, the first name of her mother-in-law, who passed away and Rush – since the author is a former inline speed skater and mountain biker.   All of Rush’s books, including "Wasteland," are dedicated to Lynn, her namesake. Rush holds a degree in psychology from Southwest Minnesota State University and a master's degree from the University of Iowa. Originally from Minneapolis, Rush currently enjoys living in the Arizona sunshine by road biking nearly 100 miles per week with her husband of 15 years and jogging with her two loveable Shetland Sheep dogs.

When You Want To Get Noticed!