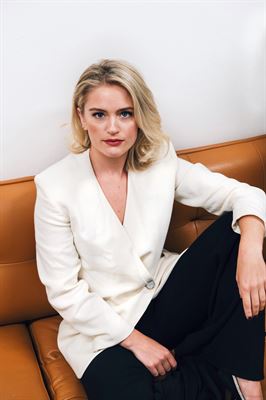 Ytrade Group AB (publ) ("Yaytrade" or the "Company") has entered into a collaboration agreement with actress Alicia Agneson, who broke through playing Freydis in in the series Vikings and is currently starring in the Netflix Original series Clark. In her new role, Alicia will lead Yaytrade's global fashion initiative.

Yaytrade has quickly established itself as one of Sweden's hottest marketplaces for the fashion and sustainability conscious. Yaytrade's marketplace is used by private individuals who can shop for premium fashion and lifestyle products from brands offering overstock, samples, and returns via Yaytrade's platform. The company also sells second-hand clothing from individuals and influencers. The company had a heavily oversubscribed IPO on the Nasdaq First North Growth Market in March earlier this year.

Alicia Agneson has been appointed Global Fashion Director at Yaytrade, where she is already a partner. Alicia Agneson was born in 1996 and grew up in Eskilstuna. Her big breakthrough came in the role of Freydis in the hit series Vikings. She is currently starring in the Netflix Original series Clark, which also stars Bill Skarsgård. Alicia Agneson will also feature in The Obscure Life of the Grand Duke of Corsica, which premieres in November 2021.

"As I am passionate about both sustainability and fashion, I am happy that more and more people are starting to understand the importance of consuming more sustainably. I am honored to be joining Yaytrade and look forward to helping more people discover the benefits of circular consumption," says Alicia Agneson.

Alicia Agneson will be Yaytrade's official representative in international fashion and her role as Global Fashion Director will include actively managing international fashion campaigns and advising on which influencers and brands the company should partner with in new markets. She will also direct the "How to become a Sustainable Rebel" project, where she will guide followers in sustainability through a dozen challenges.

"Alicia Agneson has great credibility in that she often wears vintage and circular fashion. She is one of Sweden's top international actresses and has an audience all over the world, which also makes her perfect for the role of Global Fashion Director now that our international expansion is underway," says David Knape, CEO Ytrade Group AB (publ).

This information has been published through the agency of the contact person above, at the time specified by Ytrade Group AB's (publ) news distributor Cision upon publication of this press release.

About Yaytrade
Ytrade Group AB (publ) is a Swedish fashion-tech company which operates the Yaytrade marketplace. The company was formed in Sweden and registered with The Swedish Companies Registration Office in 2015. The first version of Yaytrade's marketing platform was launched to the public at the end of 2017.

At Yaytrade, individuals can shop for premium fashion and lifestyle products directly from brands selling off their outgoing stock, samples, and returns via “digital pop-up shops”. The company also sells premium second-hand from private individuals and influencers. Community users can create their own e-store and populate it with items from collected via Yaytrade pick-up service as well as post self-created ads. Yaytrade appeals to a chic urban demographic with a striking design which took home a silver medal Swedish Design Prize in 2020 in the e-commerce category. The company's market platform is a proprietary high-tech e-commerce platform where premium fashion meets the circular economy, contributing to more sustainable consumer behaviour which further drives environmentally sound fashion consumption.