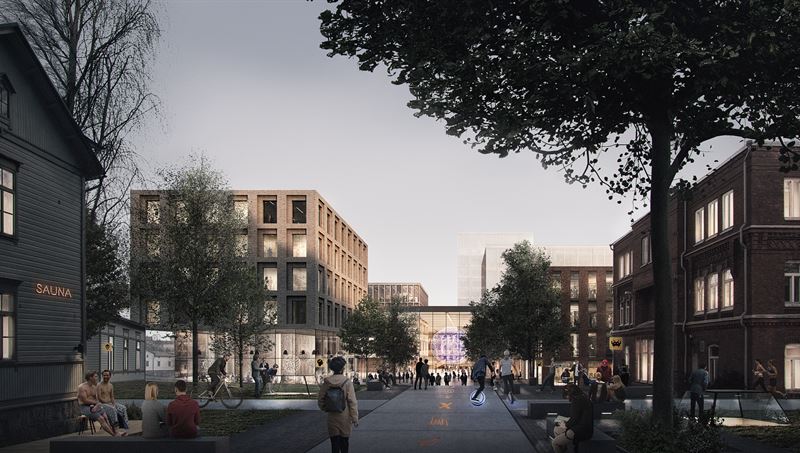 A new growth company campus covering over 50,000 square metres is being planned for the old Maria hospital area. When finished, the campus will be one of the biggest in Europe. The City of Helsinki sought a bold concept with a vision for the project as well as a developer and a contractor for the concept’s implementation.

As the result of an open application process by the City of Helsinki, a consortium operated by YIT and Keva was chosen to be proposed as the developer for the current startup cluster’s extension into the old Maria hospital area. According to the plan, construction work for the extension is to commence in 2020, and the first phase of the project would be ready for use in 2021.

The consortium comprises a total of 23 companies*) which provide the growth company campus with various innovative services and solutions, contribute to the project with their managerial and growth company expertise and further develop the project’s functional concept as well as the architectural elements reflecting it. The consortium comprises, among others, the growth company event Slush, Industryhack, who develops collaboration between large corporations and growth companies in the area as well as Accenture, who offer consultation and technology services and MaaS Global, who develop sustainable transportation solutions.

The development allocation for the re-planned land area requires that it is first approved by the City of Helsinki Urban Environment Board and, later, by the City Administration’s Trade Division. According to a preliminary plan, the development allocation for the area will be decided on in the City Administration’s Trade Division on November 26, 2018.

Objective to become one of Europe’s biggest growth company campuses

The objective for the area is to become one of the biggest growth company campuses in Europe. An application process for developers and contractors sought out a bold concept with vision for the project. The idea was to involve the contractors before the start of the planning process so that the area can be developed according to the chosen concept.

Helsinki strives to become one of the most attractive cities for growth companies in the whole world, and according to the city’s Mayor Jan Vapaavuori, startup activities play a key role in achieving this objective.

”Helsinki’s draw in the startup sector has increased, and according to a recent study by Startup Genome, our ecosystem is already the world’s most collective and most ambitious in its class. We’re doing everything we can to make Helsinki one of the best places in the world for startups and growth companies while maintaining it as an attractive cluster of expertise that draws in both businesses and talent. The expanding and developing Maria growth company campus is an important step towards achieving this”, Vapaavuori says.

“Helsinki works towards building a living urban centre, where people not only live, work, spend their free time and innovate, but also have unexpected encounters. The development of the Maria growth company campus helps achieve these objectives for a living urban centre in the best possible way”, says City of Helsinki’s Deputy Mayor Anni Sinnemäki.

“This project perfectly embodies our vision of more life in sustainable cities. Our concept is a continuation of urban structures, and its novel flexibility takes into account the fast changing facility and service needs of startup businesses”, says YIT EVP of Urban Development Juha Kostiainen.

For Keva, the project is more than just a property investment. “Our international venture capital partners view Finland as an interesting target area”, Keva CEO Timo Kietäväinen says. As a long-term investor, Keva wishes to contribute to improving the scope for action for startup and growth companies.

“At the same time, we are supporting Helsinki’s vitality as an urban centre and, therefore, promoting Keva’s primary function of retirement funding in the long term”, Kietäväinen points out.

Pull of the current startup cluster exceeds its capacity

The startup cluster that has operated in the Maria hospital area for the past two years has constantly had more applicants than the facilities can accommodate.

A covered central plaza will become the heart of the new southern section, surrounded by restaurants, cafes, event venues, offices and coworking spaces, forming a gravitational point that pulls both local operators and visitors in to encounter each other. The southern section will also have accommodation in support of the concept.

“It’s great to be a part of a project that continues the systematic development of a startup ecosystem in Helsinki. I believe that solutions to the greatest challenges of our time will be developed at the new growth company campus”, Slush CEO Andreas Saari says.

The area currently houses around 130 operators and 800 jobs. As the expansion plan is implemented, the objective is to bring around 650 new operators into the area and to create a minimum of 4,000 new jobs.

YIT is the largest Finnish and significant Northern European construction company. We develop and build apartments, business premises and entire areas. We are also specialised in demanding infrastructure construction and paving. Together with our customers, our 10,000 professionals are creating more functional, more attractive and more sustainable cities and environments. We work in 11 countries: Finland, Russia, Scandinavia, the Baltic States, the Czech Republic, Slovakia and Poland. The new YIT was born when over 100-year-old YIT Corporation and Lemminkäinen Corporation merged on February 1, 2018. Our pro forma revenue for 2017 was over EUR 3.8 billion. YIT Corporation's share is listed on Nasdaq Helsinki Oy. www.yitgroup.com/en