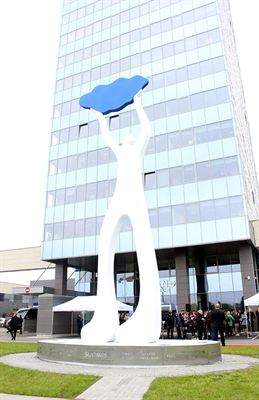 On Thursday, May 21st, in Vilnius, at Viršuliškių alley, a steel 10m high sculpture of a giant,holding a cloud, was uncovered. It was created by the famous Lithuanian sculptor Tadas Gutauskas. The "Finn" sculpture, which was designed on the initiative of Finnish companies operating in Lithuania, will decorate a newly created multifunctional center of the capital.

The sculpture is white and blue, just like the Finnish flag. The sculptor, together with the Embassy of Finland and Finnish capital business companies operating in Lithuania, wanted to create a monument which would be integrated into the history of Lithuania and Finland. With the help of the sculpture it is expected to remind society of the close and successful cultural, politicalandbusiness cooperation between the two countries, lastingmore than20 years.

According to sculptor Tadas Gutauskaswho created the sculpture, it symbolizes human resolve to reach the unachievable and chase your dream. “The sculpture is made of very well-prepared thick steel which was latergalvanizedand covered with highly resistant paint. It was designed so that it could blend into the austere environment of the Scandinavian style buildings,“ said the sculptor. “Throughout the world the collaboration of artand business is very wide and meaningful. It creates something we call immaterial and spiritual values, so it is very important and has to be encouraged”.

One of the project’s initiators and general sponsor is one of the most modern construction companies, YIT KAUSTA, which has been operating in Lithuania for five decades and is owned by the Finnish concern.

"Art has always been a source of inspiration for people who create and dream to do more. The collaboration of artand business is a motivation that functions for many centuries, and so we believe that this work of art will inspire people working, living or just visiting here to big and beautiful works,"said YIT Kausta Chief Executive Officer Kęstutis Vanagas.