Oodi gives you a reason to leave your home 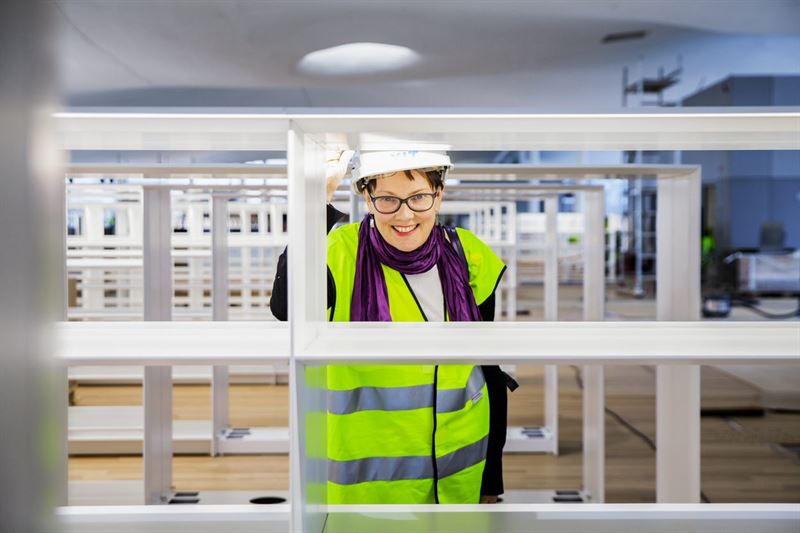 Helsinki Central Library Oodi will be a next-generation library that promotes active citizenship. “We will help the citizens to understand the backgrounds of fake news and create opportunities for them to encounter each other equally and with respect,” says Oodi’s Director Anna-Maria Soininvaara.

Anna-Maria Soininvaara is excited. Oodi will open in a couple of weeks. The result of the planning work of more than ten years will see the light of day on 5 December when Oodi will open its doors.

“I naturally hope that Oodi will create a wow effect for people. It is such a wonderful and stunning library, and something that cannot be found anywhere else. For services, it is a challenge for us to maintain the wow effect once the visitors have already familiarised themselves with the building,” says Oodi’s Director Anna-Maria Soininvaara.

Extensive partnership network under one roof

Soininvaara started as the Director of the Central Library in summer 2017. One of her largest projects so far has been the recruiting of personnel. At the beginning of October, 53 new Oodi employees transferred from other libraries of the City of Helsinki to familiarise themselves with the exceptionally wide service selection of their new workplace.

Soininvaara calls Oodi a centre of culture which brings together operators from different cultural sectors.

“It was clear right at the start that we are creating a completely new library concept. A major part of the services is produced by our partners instead of us.”

Oodi has, for example, a large movie theatre where the National Audiovisual Institute (KAVI) shows movies in the evenings. Information Center Helsinki-info moves to Oodi from the city hall, and the European Union has its own digital showroom in Oodi. Brygga, citizen participation space in the urban environment, will open its doors in Oodi. Special attention has been paid to families with children.

“The Playground Loru is located downstairs and its actual operations will start next summer in Oodi’s side yard. We also have a large pram park to welcome all families with children to the library.”

“Oodi gives you a reason to leave your home”

Most of the services provided by the partners are located on Oodi’s first floor. The second floor is dedicated to activities and studying. It is the residents’ own open playground where they can find, for example, a 3D printer and a wide selection of tools for making music: instrument rental, editing room and nine music studios.

“We have bundled different services together instead of offering them separately from various places. A certain path, for example a video or music creation path, may be followed from start to finish at Oodi,” says Soininvaara.

According to Soininvaara, this is commonly called supporting active citizenship, but it is a slightly complex term.

“Oodi supports activities and gives a reason to leave your home.”

Soinivaara thinks that one of the main tasks of libraries nowadays is to narrow the so-called digital divide.

“Services have moved online, but people cannot keep up. We provide help and support for coping in the digital world.”

See you in Book Heaven

Activities are also supported in the top floor’s Book Heaven, which houses 100,000 books. We also provide an extensive sheet music collection for music enthusiasts. Other themes, such as supporting immigrant integration, are also emphasised.

“We have a plentiful range of Finnish language course books, and we offer language cafe activities. We also have fiction written in the most common languages spoken by the immigrants.

Although Oodi is a next-generation library, it also includes nearly all the characteristics of a traditional library. However, there are no CDs at Oodi. One reason for this is that the Helsinki Music Centre, which offers an extensive selection of CDs, is located right next to Oodi.

Oodi is the place for activities and experiences, but there is also a place for being quiet in the Book Heaven.

“We thought first that Oodi will be a centre of active doing. We asked the residents for an opinion and their longing for silence was a surprise for us. There should also be places for being quiet in the centre,” says Soininvaara.

“A library is a rare place, since it is natural to come there alone as well.”

Supporting the freedom of speech, equality and literacy

Anna-Maria Soininvaara is a literary scientist and has had a long career in library services. She emphasises the basic tasks of a library also at Oodi. Libraries support the freedom of speech and strive to convey correct information.

“We will help the citizens to understand the backgrounds of fake news and create opportunities for people to encounter each other equally and with respect,” says Soininvaara. She stresses that the library is a safe and accepting place for all people and groups of people.

Libraries also have an important role in promoting culture and civilisation. Soininvaara admits that Oodi also has a hidden agenda behind the extensive service selection.

“It would be great if our services encouraged people who usually do not read to borrow a book. Literacy skills, which have deteriorated lately, are strongly related to defending literature. We are fighting together for the future of reading skills.”

The opening of the Helsinki Central Library Oodi will be celebrated on 5–6 December 2018. Oodi was designed by the architect firm ALA and constructed by YIT.

The Book Heaven on the third floor houses about 100,000 books. More than 22,000 of them are children’s books, 27,000 non-fiction and the rest fiction. Furthermore, there are about 150 magazines, 48 newspapers and 6,000 e-newspapers and e-magazines readable on a tablet available in different languages.

Users can reserve spaces from Oodi for meetings, remote work or own events.

The interview of Anna-Maria Soininvaara is a part of a three-part series of articles on Oodi.
Read the articles published before:

Oodi´s architecture is a fusion of action and timelessness

Oodi is taking shape one step at a time