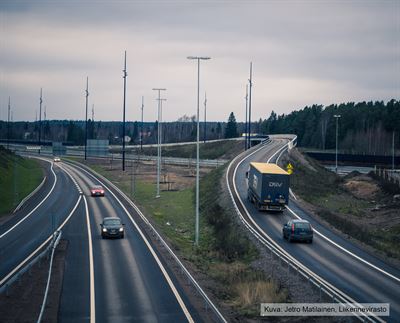 The completion of the E18 road was celebrated in Finland at the end of May. This internationally important motorway-standard route from Turku to Vaalimaa has now been entirely completed. YIT has strongly participated in constructing this high-quality road.

These are the words that the infrastructure construction experts have used to describe the E18 road project, the last parts of which were completed this year and which is now a full motorway-standard route. When the last section of the project, a motorway section of 32 kilometres from Hamina to Vaalimaa, was completed in early spring 2018, the entire Finnish part of the E18 road from Turku to Vaalimaa was a motorway-standard route.

The transformation of the route from Turku to Vaalimaa into a motorway-standard route was actually not a quick process, since the construction of the first section from Helsinki to Turku began already in the 1950s. On the other hand, the construction process progressed at a good speed in the 2000s and the sections from Muurla to Lohja (approximately 50 km), from Koskenkylä to Kotka (approximately 53 km) and from Hamina to Vaalimaa (32 kilometres) were constructed quickly. These projects were also realised using the life-cycle model.

“The E18 road is an extremely important route in Finland. It joins all of the important ports and airports to the main road and rail line networks. Furthermore, it joins us to our important export countries. It can be said that, logistically, the road is Finland’s main vein,” says Lars Westermark from the Finnish Transport Agency.

In his opinion, the safety and fluency are the most significant aspects of the road.

“The customer of the Finnish Transport Agency is the person using the road. Our main task is to ensure that everything functions in Finland, is logistically fluent and as competitive as possible. E18 is the main route and we wanted to invest in developing it and now it is entirely a motorway-standard route.”

According to Westermark, the E18 project has always managed to engage the best experts in the field.

“The expertise has been high and professional at every level. This is very important for the client,” says Westermark.

Westermark states that the construction of the motorway using the life-cycle model during the 2000s has sped up the completion of the road by several years.

“This implementation method was profitable for the taxpayers. We were able to start using this high-class road quickly.”

A new way of constructing was introduced in the E18 project. The environment, for example, was closely taken into account when designing and constructing the road.

From Muurla to Lohja on a tight schedule

“50 kilometres of motorway, 7 tunnels and 75 bridges were built in extremely challenging terrain with steep rock in just three years,” tells Esko Mulari about the Muurla–Lohja road project that was completed in 2009.

He thinks that it was quite an achievement to implement the project in such a tight schedule, and it would not have succeeded if it were not a PPP project.

“This is one of the first large PPP projects, which meant that this was also a learning project. But it was definitely reasonable to implement a project of this size precisely in this way,” he says.

The challenging terrain requires expertise both in constructing and technology. All of the seven tunnels along the road were constructed paying special attention to the traffic safety. When the motorway section was completed in 2009, the 2.2-kilometre-long Karinaisten tunneli was the longest tunnel in Finland. Nowadays, the Tampereen rantatunneli tunnel is longer than the Karinaisten tunneli.

Project manager Matti Heikkinen participated in the telematics projects of this motorway project.

The tunnels that are longer than 500 metres have an automatic fire alarm and security system. Furthermore, there is a disturbance observation system in the Karinaisten tunneli. Road users are grateful for the technology, since, for example, the lighting in the tunnels changes according to the external brightness.

Since this was a PPP project meaning that Tieyhtiö Ykköstie, who built the road, will maintain the road until the end of 2029, Matti Heikkinen is still involved with the project, for example, in developing the automatic monitoring of the tunnels.

“At the time when the tunnels were built, the chosen technology functioned well, but it naturally needs to be constantly updated and maintained. We will implement an update during this year, in other words, we are improving the communication network,” says Heikkinen.

Power of co-operation in the Koskenkylä–Kotka section

Kari Alavillamo, who was the Project Manager in the Koskenkylä–Kotka section, reveals that he has fond memories of the motorway project.

“The project succeeded so well that I feel good always when driving on the road. I have to admit that this project was one of the highlights of my career,” says Alavillamo.

According to Alavillamo, the fact that the TYL Pulteri motorway site was chosen as the Construction Site of the Year 2013 proves that the work was performed with a strong spirit of togetherness and expertise.

“All sections of the road were completed ahead of the agreed schedule. A travel job and long days took their toll, but the project also gave much. TYL Pulteri was formed by YIT and Destia professionals, although there were no company-based boundaries during the project. We were all on the same footing; we were Pulteri employees. The co-operation with the client also worked extremely well, which is characteristic to a successful project,” says Alavillamo.

The fact that the motorway was partly constructed next to an existing motorway and next to population centres was, in Alavillamo’s view, just everyday work for the professional work team.

“We managed to get the best resources to this project, also regarding the design project. The consortium of Ramboll, Sito and Destia was able to keep the tight schedules well,” he says.

Alavillamo thinks that the life-cycle model is an excellent way to implement a motorway project.

“Precisely in this kind of project model the service providers are also able to influence the economics of the project. Decisions that affect the maintenance costs of the project are made already during designing, and, therefore, the cheapest solution is not always the cheapest when considering the life-cycle costs,” says Alavillamo.

New kind of constructing in the Hamina–Vaalimaa section

Tieyhtiö Vaalimaa Oy’s Managing Director Jaakko Kouvalainen considers the safety of the newly completed motorway section as the most significant feature of the road.

“The old Main Road 7 was dangerous. There was lots of heavy traffic on the road, it went through populated centres and children used the road when walking to school,” tells Kouvalainen.

After the completion of the new motorway, users were able to move fluently. Kouvalainen hopes that the smooth connection will boost the economy of the southeast part of the country.

“I hope that this new road will be a positive factor for the area and will activate the development of the municipalities of the area,” says Kouvalainen.

Digitalisation of construction was a significant part of the Hamina–Vaalimaa motorway project. The project has a digital maintenance manual and, for example, machine vision and drones were used in modelling and data analysis.

According to Jaakko Kouvalainen, high-quality roads can be constructed with a tight schedule using the new ways of construction and the life-cycle model.

“Naturally, the service provider is responsible for the schedules, quality of construction and level of maintenance. The model ensures that each part of the construction is working.”

The biggest challenges in constructing the Hamina–Vaalimaa motorway were caused by the natural conditions, according to Kouvalainen.

“Opening the motorway to traffic during winter is a big challenge. Long cold winter temperatures affected the progress of the work, but we managed to stay on schedule.”

The first one in Finland

YIT has also renewed Ring Road III, which belongs to the E18 road, between the Lahdenväylä and Porvoonväylä motorways and the first entirely information modelled bridge was implemented in the junction of Ring Road III and Porvoonväylä in connection with the renovation. S7 bridge is a 328-metre-long beam bridge that curves 13 metres above Ring Road III.

Quality work under budget and ahead of schedule

Jarkko Salmenoja, who worked as the Vice President at YIT at the time of the E18 projects, feels good about driving on the road.

“We made a high-quality motorway, which was implemented clearly under budget and ahead of schedule,” says Salmenoja.

Salmenoja thinks that E18 represents YIT’s core business, and the company’s strengths were visible in the projects.

“We took care of arranging the financing and we have extensive expertise in engineering”, he says.

He emphasises the significance of partnership in the life-cycle model.

“In this kind of a project, all parties must co-operate to reach the common goal and support each other. Co-operation skills are important in the current construction projects, and the spirit of partnership should not be compromised.”

YIT participating in the E18 projects

YIT is the biggest construction company in Finland and a major player in Northern Europe. We construct and develop apartments, business premises and entire residential areas. Furthermore, we are specialists in infrastructure construction and paving. Together with our customers, our 10,000 professionals create increasingly functional, appealing and sustainable cities and living environments. We have operations in 11 countries: Finland, Russia, Scandinavian and Baltic countries, the Czech Republic, Slovakia and Poland. The new YIT was created by the merger of YIT Corporation and Lemminkäinen Corporation, both over 100 years old, on February 1, 2018. In 2017, our pro forma revenue amounted to over EUR 3.8 billion. YIT Corporation’s share is listed on Nasdaq Helsinki. www.yitgroup.com 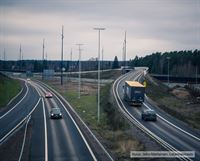