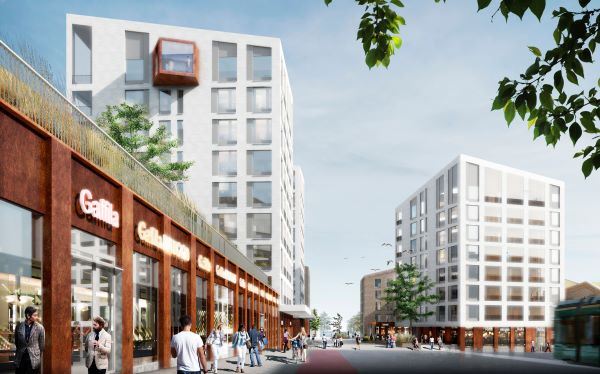 The maritime Centre Block Kruunis, which borders Haakoninlahdenkatu, Varisluodonkatu and Pitkäluodonkatu, is a complex of housing and services next to the school and daycare centre block and close to great public transport connections. The Crown Bridges tramway, which will be completed in 2026, will run next to the block, creating a link between Kruunuvuorenranta and the city centre. Centre Block consists of three groups of buildings and an urban space reserved for pedestrians in the middle.

The foundation of the approximately 7,000 floor square metre retail offering of Kruunis consists of two supermarkets, supplemented by other daily services, selected specialist shops as well as café and restaurant services. The commercial services will open at the same time when the tramway is completed and the first residents move in.

Approximately 300 apartments will be completed in the block, some with sea views. The residents are served by housing solutions for different situations in life as well as commercial services. Kruunis will have its own Village Centre open to all residents and the other shared facilities of the City of Helsinki located in the area are also available to the residents. Shared cars will also be available in Kruunis, reducing the need to own a car.

The energy system in Kruunis is exceptional: condensation heat generated by grocery shops throughout the year is utilised by recycling energy flows in the properties, apartments and other commercial premises of the block.  Energy for the system is also generated by the solar cells on the roof.

In the coming years, Kruunuvuorenranta will develop in great leaps. By 2030, new homes for approximately 13,000 residents and workplaces for approximately 800 employees will be built in the area. Light rail, cyclists and pedestrians can use the three bridges from Hakaniemi, Korkeasaari and the southern-most point of Kalasatama, Nihti, to the city centre. Travelling to the city centre takes about 15 minutes by tram and 20 minutes by bike. The tramway connection is expected to be completed in late 2026.

“Kruunis in Kruunuvuorenranta is a true example of sustainable urban environment development. The project will be completed, to a large extent, simultaneously with the Crown Bridges tramway. Kruunis will be the centre of Kruunuvuorenranta, where local services will be concentrated and residents of the block can enjoy smooth everyday living with great services and public transport,” says Vice President Heikki K. Hannukkala from YIT.

YIT is the largest Finnish and a significant North European construction company and urban developer. We develop and build apartments and living services, business premises and entire areas. We are also specialised in demanding infrastructure construction. Together with our customers, our nearly 8,000 professionals are creating more functional, attractive and sustainable cities and living environments. We operate in 10 countries: Finland, Russia, Sweden, Norway, the Baltic countries, the Czech Republic, Slovakia and Poland. In 2019, our revenue was approximately EUR 3.4 billion. YIT Corporation's share is listed on Nasdaq Helsinki Oy. www.yitgroup.com