YIT and SATO involved in the development of Hakunila 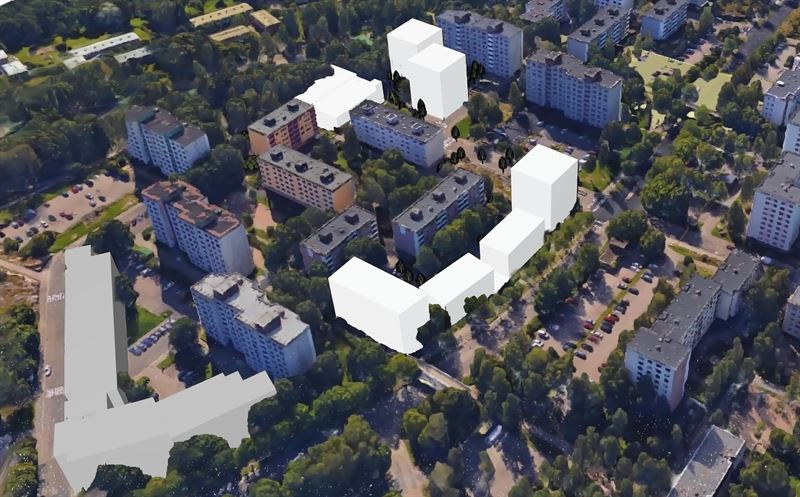 YIT and SATO initiated a joint review regarding the development of the Hakunila district in 2017. Now YIT, SATO, M2-Kodit and As Oy Hiirakkokuja 6 have signed a co-operation contract for designing new apartments and a centralised parking facility for the Hiirakkokuja neighbourhood.

In 2017 the City of Vantaa released Hakunila’s urban planning framework which seeks significant supplementary planning and development of the downtown area of Hakunila. In the same year, YIT and SATO launched a collaboration during which the development potential of the Hakunila district has been widely reviewed. This new project is a continuation of the supplementary plan for the Raudikkokuja block north of Hiirakkokuja. The Raudikkokuja project will make it possible to build about 300-360 new apartments and the Hiirakkokuja project the building of about 260-320 apartments.

Hakunila is an interesting area because of its great recreational activities and the developing public transport routes, among other features. For example, the diverse sports park, the nearby Sipoonkorpi Natural Park and the Håkansböle manor grounds offer opportunities for recreation. Hakunila is easily accessible and the planned light rail towards Tikkurila further improves the public transport connections.

The development of suburbs a common objective

YIT’s vision is ”more life in sustainable cities”– in city centres as well as in the suburban areas. In the suburbs this can mean both renovating and new construction. The objective is to improve the quality of the environment and to make it more attractive, as well as to increase the population and thereby also the demand and supply of services in the area. Often development entails also the restructuring of parking.

”Hakunila has a lot of potential, and through supplementary planning this development can be accelerated. With a joint project we can further develop our concept of area development”, says Juha Kostiainen, who is in charge of urban development at YIT.

SATO has been involved in the construction of Hakunila since the beginning of the 1970s and the company owns lots of rental apartments in the area. SATO invests in the development of the Hakunila district in many ways: the renovations of the already existing SATO rental apartments have begun in the past years and supplementary planning brings new housing stock to the area.

”We have been closely involved in the development of Hakunila and we also want to invest in Hakunila’s future. The working transport connections and services create a good foundation on which to develop a neighbourhood, where people can thrive and everyday life runs smoothly”, says SATO’s vice president of investments Antti Aarnio.

M2-Kodit is a company wholly owned by the Y-säätiö group which focuses on reasonably-priced ARA dwellings. The objective of M2-Kodit is to offer apartments the tenants can afford.

What we aim to accomplish

In the planned Hiirakkokuja area, there are houses owned by SATO, M2-Kodit and As Oy Hiirakkokuja. YIT and the landowners have signed a co-operation agreement to develop the area as one entity, which makes it possible to plan solutions that benefit all the parties involved, for example when it comes to parking.

The construction for the first new apartments included in Hakunila’s supplementary plans will likely begin in 2020-2021.

YIT is the largest Finnish and significant North European construction company. We develop and build apartments and living services, business premises and entire areas. We are also specialised in demanding infrastructure construction and paving. Together with our customers, our nearly 10,000 professionals are creating more functional, more attractive and more sustainable cities and environments. We work in 11 countries: Finland, Russia, Scandinavia, the Baltic States, the Czech Republic, Slovakia and Poland. The new YIT was born when over 100-year-old YIT Corporation and Lemminkäinen Corporation merged on February 1, 2018. Our restated pro forma revenue for 2018 was approximately EUR 3.2 billion. YIT Corporation's share is listed on Nasdaq Helsinki Oy. www.yitgroup.com