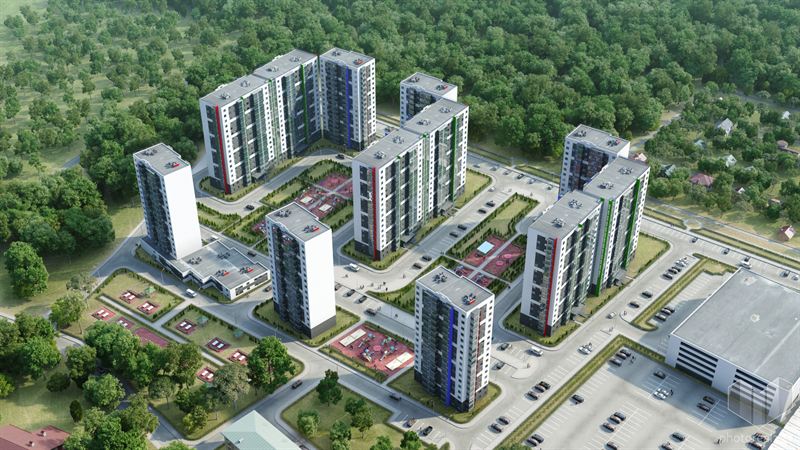 In Russia, YIT is known for its high-quality Finnish construction. And customers can experience this for themselves first hand. In Moscow, YIT organises events for residents where apartment buyers are invited to visit their future home when construction is nearing completion.

At the beginning of the year, the YIT Park location hosted more than 330 homeowners in the town of Krasnogorsk. There was plenty of food on offer, and fun activities were arranged for children. YIT’s representatives presented the location to the residents-to-be, and explained what building materials were used, amongst other things.

“We want customers to see for themselves the high quality of the construction and workmanship,” says Head of Segment for Housing Russia Teemu Helppolainen. This assures them that they have made the right decision, and are in safe hands.”

Another aim of these highly popular events is to help foster a sense of community spirit in the area.

“We bring our neighbors together even before the apartments are handed over. This helps promote a pleasant living environment, which is what YIT aims for in everything we build,” Helppolainen adds.

Measured by volume, the ever-growing area around Moscow, Oblast, has the most new apartments in the whole of Russia. There is considerably more construction there than in the capital itself. YIT has operated in the region for a decade now.

The densely populated Moscow region includes several towns that are small on the Russian scale, such as Krasnogorsk, Elektrostal, Noginsk, Ramenskoe, Zvenigorod, Shchelkovo, and Lytkarino. There are more than seven million people living in towns in the Moscow region. The population of Moscow itself is over ten million.

Construction focuses most strongly on the towns close to Moscow. These are popular “dormitory towns”, home mainly to people who commute to work in Moscow. YIT mainly focuses on these towns.

The towns and cities further from Moscow are self-sufficient when it comes to jobs, and so housing construction in those places has so far been more limited. YIT has building sites in these towns as well.

The new governor, Andrei Vorobev, is vigorously developing the Moscow region. Among the construction projects during his time in office are several new roads, an extended rail network, refurbished street lighting, renovated car parks, and new schools, kindergartens, and children's playgrounds. Commuters to and from Moscow commander are delighted with the renewal of the commuter trains.

YIT’s innovation in the area is modern prefabricated houses

“A big advantage of modern prefabricated elements is that the floor plan is compact, and so the apartment area is used efficiently. For example, thermal imaging techniques or decorative tiling are used in finishing the facades,” says Moscow region Director of Marketing and Communications Lilja Ganagina.

In Moscow, YIT focuses on projects involving construction of residential and non-residential buildings, as well as social and commercial infrastructure. The locations are situated along good transport links, as most of the customers work in Moscow.

“Our customers want to live in the suburbs, which offer every possible comfort and convenience: they’re safe, close to a wide range of services, and suitable for children,” Ganagina explains.

YIT responds to the wishes of customers by building parking facilities, green areas and business premisess. Often also schools and kindergartens. In this way, residents don’t have to wait for the area to develop around their home. Rather than having to wait for services to gradually emerge there, everything is usually ready when they move into their new home.

“Most of our customers are families with children. We at YIT understand the major significance of high-quality and well-functioning infrastructure to families,” says Ganagina.

YIT’s locations in the Moscow region

YIT has built ten 12-14-storey houses in this suburb of Yegorevsky, along with kindergartens, cafés, and shops. There is a park nearby, as well as a sports hall and two shopping centres. The location is also close to nature, being only a 10-minute drive from the nearest woods and a lake.

In the town of Noginsk, we are building six 17-storey houses, a kindergarten for 180 children, a school for 375 pupils, and a covered parking facility for 550 cars.  Construction began in January 2016.

YIT is building two houses in the town of Žukovski, with 372 new apartments in all. This suburban location already has 13 apartment buildings that were built by YIT, along with a kindergarten and two underground parking facilities. Construction of Solnetšny began with some fanfare, when the first stone was laid by Permanent Secretary Jari Gustafsson of the Finnish Ministry of Economic Affairs and Employment, the Finnish Ambassador in Moscow Mikko Hautala, and the Mayor of Žukovski at the beginning of March.

Dormitory towns in the Moscow region

The area includes several towns, with a combined population of more than 7 million.

Nearly half of the residents of these satellite towns live very close to Moscow.

The largest such town is Balašiha, with over 450,000 residents.

The area is heavily industrialised, with the main operations being metallurgy, oil refining, food, energy, and machinery.

The area is also home to Russia's densest railway network.

YIT creates better living environment by developing and constructing housing, business premises, infrastructure and entire areas. Our vision is to bring more life in sustainable cities. We want to focus on caring for customer, visionary urban development, passionate execution and inspiring leadership. Our growth engine is urban development involving partners. Our operating area covers Finland, Russia, the Baltic countries, the Czech Republic, Slovakia and Poland. In 2016, our revenue amounted to nearly EUR 1.8 billion, and we employ about 5,300 employees. Our share is listed on Nasdaq Helsinki. www.yitgroup.com