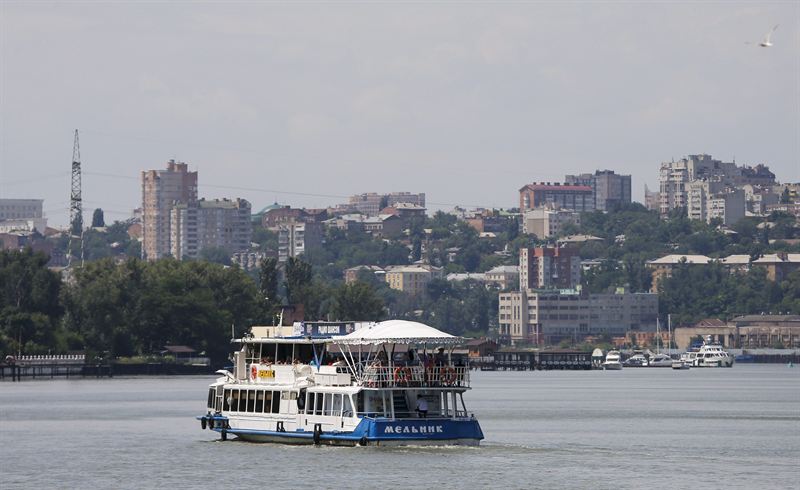 The development in Rostov-on-Don has been boosted by the 2018 FIFA World Cup to be held in Russia.

YIT’s most recent project in Rostov-on-Don, Akvamarin, will occupy a central location at the heart of the city, on the leafy riverside boulevard lined with sculptures and popular with the locals.

The two apartment buildings under construction will house two hundred business class apartments, all with open views over the Don River.

“It is difficult to imagine a better place to live than this. This is our contribution to regenerating the prime location of the city,” says Galina Alemasova, Marketing and Sales Director for YIT Don.

There will be a children’s playground and green areas on the site. The ground floor is reserved for businesses as with other YIT developments.

“Commercial spaces bring new jobs. At the same time, they help upgrade the infrastructure of the area,” says Alemasova.

YIT has its own maintenance company in Rostov-on-Don. It is in charge of maintaining all YIT buildings and offers their residents additional services during their residence, such as renovation services.

The lively and peaceful centre of Southern Russia

With a population of over one million, Rostov-on-Don is located in Southern Russia in the Don River delta, a few dozen kilometres from the Sea of Azov.

As part of the Black Earth Region, the city’s main incomes are based on agriculture and related industries. Several international food corporations operate in the area.

Rostov-on-Don is not only the most important industrial city in Southern Russia but also a major logistical centre. It is, for example, one of the main railway hubs in Russia. The federal highway from Moscow to the Caucasus runs through the city and thanks to the major port, shipping on the river is busy.

Thanks to its location in the crossroads of many cultures, the city has always been highly cosmopolitan. Ten percent of the population are non-Russian nationals. Conflicts between ethnic groups have, however, been avoided, and the residents of the city take great pride in their cultural tolerance.

“This is such an interesting place to live, as you come into contact with people from all these different cultures and religions,” says Alemasova.

The development in Rostov-on-Don has been boosted by the 2018 FIFA World Cup to be held in Russia. This is the first time the city has been the host of such a major international sports event.

In preparation for the tournament, a new stadium for 45,000 spectators is to be completed. A new international airport, Platov, is also under construction. New hotels are being built and the old building façades are undergoing renovation.

YIT has so far carried out fewer projects in Rostov than in other Russian cities.

“We are ready to build more. There are old industrial plants standing empty, but the planning situation is challenging. The local authorities have not been able to amend the town plans for residential purposes as quickly as one would hope,” says Teemu Helppolainen, Head of Business Area, Russia.

Nearly all YIT projects in Rostov-on Don are located in the city centre. The city was established in the 18th century and this creates certain challenges when building in the centre. The town plan stipulates that before certain areas can be built on, an archaeological survey must be carried out.

“If antiquities are discovered, the building must be erected somewhere else. Of course this is something we investigate prior to acquiring land,” Helppolainen says.

Rostov-on-Don enjoys a  continental climate, so in the hottest summer months, the temperature can soar up to +50 degrees centigrade. This much heat will affect the construction, for which YIT has introduced new innovations.

“In the south, every resident will install air-conditioning in their home. However, external walls dotted with bulky AC units is not a very aesthetic. In YIT projects, this is taken into account at the design stage. There are ways to hide the units,” Helppolainen says.

Traditionally, in Russia apartment buildings one floor is left empty for HVAC equipment. The extra top floor also prevents the topmost apartments from turning into furnaces. YIT has built its most recent projects without reserving the top floor for building services, which initially invited criticism.

“We use premium insulation materials in our projects, so the apartments stay cool even in the summer,” says Helppolainen.

YIT Don has operated in Rostov since 2007. It has successfully built a good reputation in the city over a relatively short time.

Andrey Shumeyev, General Director for YIT Don, participates actively in the public discussion on local housing and building policies. For the engineering students at the local technical university, YIT is frequently used as an example of occupational safety on building sites. YIT is also known for completing its projects on schedule.

“Brand surveys have shown that YIT has made a name and has a good reputation in Rostov,” says Helppolainen.

A development located by the Don River, Akvamarin comprises two buildings, one 19-storeys and the other six-storeys. The development will offer 227 business class apartments: studios, one-bedroom and two-bedroom apartments.

Special attention has been paid to the energy-efficiency in this project. Thanks to energy-saving technologies and high-quality materials, the apartments are in the B energy class, the second highest class.

Kaskad comprises one 10- and one 14-storey apartment building and is located close to the city centre. The buildings will house 233 comfort class apartments.

The 2.7 hectare plot owned by YIT is located in the central Leninsky district. The plan is to build four 20-storey apartment buildings and an underground car park.

Rostov-on-Don is the capital city of Southern Russia

Rostov-on-Don is home to more than 1.1 million people.

It is the capital city of the Rostov Oblast and the administrative centre of Southern Russia.

The multicultural city has a notable Armenian population. Other ethnic groups in the city include Ukrainians, Azerbaijanis and Tatars.

Mikhail Sholokhov, the winner of the Noble Prize in Literature and writer of And Quiet Flows the Don, hailed from the Rostov region. The legacy of the novelist is widely treasured in Rostov.

The 2018 FIFA World Cup tournament will take place in Rostov-on-Don as well as ten other Russian localities.

YIT creates sustainable cities and a better living environment by building apartments, business premises, infrastructure and entire areas. We focus on providing a first-class customer experience, high quality and continuous development of our diverse expertise. Our operating area covers Finland, Russia, the Baltic countries, the Czech Republic, Slovakia and Poland. In 2015, our revenue amounted to nearly EUR 1.7 billion and we currently have around 5,300 employees. Our share is listed on Nasdaq Helsinki.www.yit.fiwww.yitgroup.com