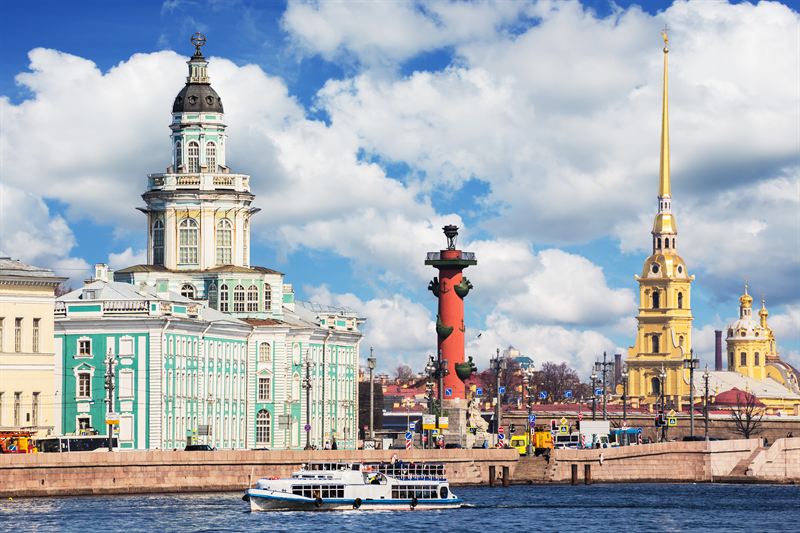 A vast wooded area surrounds YIT’s Novo Orlovsky construction site in northern St. Petersburg. Vast is also the word with which to describe YIT’s residential area under construction there, set to comprise more than seven thousand apartments. In addition, the area will house daycare centres, schools, a supermarket, shops, cafés and a sports centre.

Residents of St. Petersburg have traditionally sought homes from the city’s green northern districts. At the moment, people seem to favour the Primorsky district, which is exactly where YIT’s Novo Orlovsky is being built.

“The high demand for the Novo Orlovsky apartments is yet another example of how people appreciate the chance to live in a clean environment, close to nature and next to good traffic connections,” says Maxim Sobolev, Sales and Marketing Director at YIT St. Petersburg.

Residents of St. Petersburg are considered leaders in living in Russia. The residents of this busy metropolis favour housing that is as easy and convenient as possible.

YIT has invested in the building management and maintenance services of St. Petersburg apartments. The selection of additional services available for occupants has been increased actively over the past few years.

St. Petersburg’s residents are the first target group in Russia to whom YIT offers new services for easier and care-free living. The conversion of balconies into heated spaces, for example, first became a hit in St. Petersburg, after which it was added to the selection of services available in other cities, too.

“YIT has introduced a great number of novelties to the market of housing construction, novelties which demonstrate the Group’s one hundred years of experience in modern living and the creation of pleasant residential environments,” says Sobolev.

In St. Petersburg, YIT was the first to start selling apartments with finished surfaces. Before that, the finishing of walls and the roof of an apartment was the resident’s concern.

“The proportion of apartments with more extensive trimming is still higher in St. Petersburg’s construction sector than it is elsewhere in the country,” says Teemu Helppolainen, YIT’s Head of Housing Russia segment.

YIT is likewise the first construction company to introduce Finnish-style elements – such as saunas, big balconies and storage rooms – to apartments in Russia. Such new features, which add to the comfort of living, have been received well in St. Petersburg.

“A St. Petersburg customer surprisingly often wants their apartment to include a Finnish-style sauna. This is not true for the rest of Russia,” says Helppolainen.

A diverse industrial base guarantees growth

YIT has operated in St. Petersburg for nearly 30 years now. Initially, YIT’s operations in the city focused on construction projects other than residential buildings, which have nevertheless been its focus over the past 16 years. During the current millennium, St. Petersburg has witnessed the construction of more than 40 YIT apartment buildings.

St. Petersburg’s calling card is its Historic Centre, with the conservation of its original appearance protected by strict building regulations.

Even on the global scale, St. Petersburg is indeed a unique city.

“St. Petersburg was built from zero into a city of millions in a matter of 200 years. The centre reflects the modern, European building styles of their day. Usually, cities this big form over a period spanning hundreds of years,” says Helppolainen.

St. Petersburg is Russia’s cultural capital, but its ports also provide it with a good logistical location and thereby a diverse commercial and industrial life. The former centre for the arms industry nowadays contains plenty of other industrial activities, such as food companies and car manufacturers.

“Thanks to its diverse industrial base, the city has been able to continue developing, even under the current, challenging economic conditions,” says Sobolev.

YIT builds in the Historic Centre

The job and educational opportunities offered by St. Petersburg attract new residents from other parts of the country, particularly Northern Russia, on a continuous basis. The newcomers require more apartments and new residential areas.

“The fact that more than ten per cent of our customers have moved to St. Petersburg from someplace else is the city’s distinctive feature,” says Helppolainen.

YIT has renovated three buildings constructed at the turn of the 1800s and 1900s at the Smolny prospekt site. They will soon be accompanied by three new buildings in the neoclassical style.

The exceptional character of St. Petersburg has become familiar in the course of the project.

“The architectural regulations must be taken into account and respected,” says Helppolainen.

St. Petersburg is the cultural capital of Russia

The city was founded on the shores of the Neva River by Peter the Great in 1703.

For more than 200 years during the tsarist era, it functioned as the capital city of Russia.

St. Petersburg is home to more than five million people.

It has three universities and tens of other institutions of higher education.

Several world-renowned authors—including Pushkin, Dostoyevsky and Gogol—lived in St. Petersburg and wrote about it.

The Historic Centre is a UNESCO World Heritage Site.

St. Petersburg can be reached from Helsinki by rail in 3.5 hours and in an hour by plane.

YIT is building seven-storey buildings which will come to house seven thousand apartments over the years in this 46-hectare area. In addition, the site will come to include 18 multi-storey parking facilities, five daycare centres, two schools, a supermarket, shops and a sports centre. YIT is also building roads for the new residential area.

The Taller de Arquitectura studio of the Spanish architect Ricardo Bofill is responsible for the overall design of the area.

YIT is renovating three old buildings and constructing three new buildings, which will house 395 elite class apartments, in the Historic Centre. The new buildings were designed by the Spanish architect Ricardo Bofill. The area will also come to include a daycare centre, a two-storey underground car park and green spaces.

This area under construction in the St. Petersburg suburb of Pushkin will be home to five-storey apartments. INKERI is located in the city’s historic district, surrounded by the beautiful parks and palaces of the well-known tourist destinations of Tsarskoe Selo and Pavlovsk.

The area’s architecture and landscape design represent the modern Nordic style. It will come to include lawns, open spaces and children’s playgrounds, with equipment manufactured by Finnish Lappset.


YIT creates sustainable cities and better living environment by developing and constructing housing, business premises, infrastructure and entire areas. We focus on providing a first-class customer experience, high quality and continuous development of our diverse expertise. Our operating area covers Finland, Russia, the Baltic countries, the Czech Republic, Slovakia and Poland. In 2015, our revenue amounted to nearly EUR 1.7 billion, and we employ about 5,300 employees. Our share is listed on Nasdaq Helsinki. www.yitgroup.com