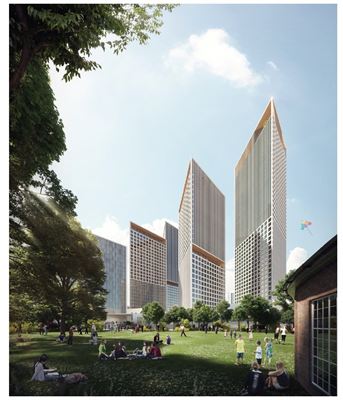 YIT’s competition proposal TRIGONI was selected for the second phase of the international Helsinki High Rise design-build competition. The competition proposal’s most prominent feature is its trigons – equilateral triangular towers. In addition to them, the proposal wants to make sure that the scale of the area will be human-sized with branched lively street areas enabling walking and spending time in the neighbourhood.

High rises are a new building type in Finland. The grouping of the buildings in the competition proposal binds the presented silhouette to the existing urban structure, creatively combining high and low areas. There are also parks and squares in the area to create varying urban space.

High-rise construction presents new kinds of opportunities for the development of nearby neighbourhoods. When the buildings fit in the existing urban structure, at best they complement and enrichen the area. Despite high-rise buildings, the area has been developed for pedestrians. In the competition proposal, different functionalities – living, working and commercial premises – have been divided in balance. This overall solution provides a great basis for the area’s vibrant and diverse development.

“For the first time in Finland, we can develop a group of high rises that suits our circumstances and is of international level. This opportunity is unique – the goal is to create an impressive but technically simple high-rise concept,” says Professor Rainer Mahlamäki, who is the head of the design team.

The Helsinki High-Rise competition and the development and future construction of the Pasila tower area are a significant opportunity for YIT and the competition team compiled by YIT.

“For all parts, we invest in the further development of our competition proposal in the competition’s second phase, in co-operation with the organisers. We believe that our competition proposal will transform Pasila into a vibrant urban area that is attractive year-round. It will also further increase the attractiveness of Helsinki and interest in the city also on a global scale,” says Antti Inkilä, Head of the Housing Finland and CEE Segment.

In the second phase of the competition, the contestants create a more detailed plan for a second round of evaluation, and the City of Helsinki and Senate Properties negotiate with each contestant about the starting area of the implementation contract.

The entire design area covers the area south of Pasilansilta from Pasilankatu to Ratapihantie. It covers 150,000–200,000 squares metres of residential, office and commercial premises. Up to half of the area can be used for residential purposes.

Helsinki City Council and Senate Properties will decide about the winner of the competition and approval of the implementation contract in autumn 2018. The objective is to start the construction work in 2020–2021.

YIT creates a better living environment by developing and constructing housing, business premises, infrastructure and entire areas. Our vision is to bring more life into sustainable cities. We want to focus on caring for customers, visionary urban development, passionate execution and inspiring leadership. Our growth engine is urban development involving partners. Our operating area covers Finland, Russia, the Baltic countries, the Czech Republic, Slovakia and Poland. In 2016, our revenue amounted to nearly EUR 1.8 billion, and we employ about 5,300 employees. Our share is listed on Nasdaq Helsinki. www.yitgroup.com

TRIGONI, a high rise with an equilateral triangular floor plan, creates Helsinki’s architectural and cityscape identity. There are also parks and squares in the area to create varying urban space.

In addition to the triangular high rises, the proposal wants to make sure that the scale of the area will be human-sized with branched lively street areas enabling walking and spending time in the area. 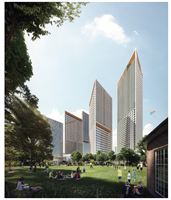