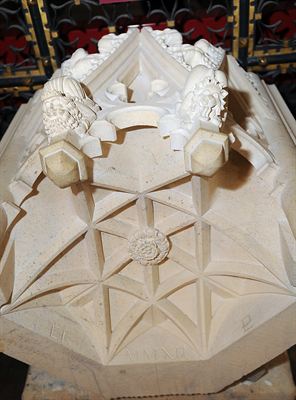 A record of the Queen’s visit to York Minster during her Jubilee year is being set in stone, with the completion of a unique pedestal and canopy that will feature on the restored East Front.

The stones will be installed onto the East Front next year, but have gone on display within the new masonry exhibition in the East End of the Minster, so that visitors can see the carvings for the first time up close. Created by York Minster’s Head Banker Mason; Dave Lamb, the canopy stone features a lion and a king, and is carved with the initials “ER” (Elizabeth Regina) and the year 2012 as a permanent reminder of its creation during her jubilee year for generations to come. The pedestal stone was masoned by Deborah Hughes and carved by Dave Willett. The Latin inscription ERII LX ANNIS REGNI PERACTIS MMXII was written with kind assistance from Stephen Anderson, Senior Tutor at Winchester College.

“We’ve combined some of the original artistry from the East Front with the Queen’s initials to mark this special anniversary – not only of the Queen’s jubilee year, but also of her visit to York Minster,” explains Rebecca Thompson, superintendent of works for York Minster. “Within the stained glass of the window, the royal lineage is presented with an illustration of a king and a lion, so we have introduced these into the design, and then subtly added the lettering in a sheltered place on the lower edge of the canopy, where it will remain protected for many years to come.”

The restoration of the masonry on the East Front of York Minster is part of the wider York Minster Revealed project, which has been generously supported by the Heritage Lottery Fund. Erosion and environmental damage had left many of the original carved features unrecognisable, and so the resident stonemasons have worked closely with historians and experts to create replacement pieces which blend sympathetically with York Minster’s gothic design.

The underside of the canopy recreates the eroded stone that it replaces, with a technically-challenging vaulted design and an unusual rose at its centre. The stone also features pierced tracery – one of the trickier aspects of the design completed by Dave Lamb over a 14 week period.

The canopy will be fixed into position on the right hand buttress of York Minster’s East Front, around 70ft off the ground, next spring during the fixing season, which starts when the risk of frost diminishes.

Visitors can see the stone, and find out much more about the work of York Minster’s skilled masons - current and historic – in the new interactive displays in the All Saints Chapel in the East End, adjacent to The Orb, where they can explore the craftsmanship that has gone into the East Front, due to be revealed again in 2016.

The York Minster Revealed project is a five-year project scheduled for completion in early summer 2016. It is the largest restoration and conservation project of its kind in the UK. The cost of the whole York Minster Revealed Project is £20 million, of which £10.5m has been generously supported with a grant from the Heritage Lottery Fund (HLF). The remainder of the fund has been raised by York Minster.

The most recent part of York Minster Revealed was launched to the public in October 2012 and includes the contemporary elliptical stained-glass orb and interactive galleries in the East End of the Minster. Allowing visitors a once-in-a-lifetime opportunity to see, at close range, some of the magnificently restored panels of the Great East Window, England’s artistic equivalent to the Sistine Chapel.

Coming soon in Spring 2013 will see the opening of the Undercroft, visitors can take an inspirational journey into the underground chambers of the vast Undercroft and Treasury, revealing York Minster’s past, present and future. Dynamic, new interactive displays will reveal the significance behind York Minster’s most treasured artefacts as never before, in an inspirational two thousand-year journey.

About the Heritage Lottery Fund

Using money raised through the National Lottery, the Heritage Lottery Fund (HLF) aims to make a lasting difference for heritage, people and communities across the UK and help build a resilient heritage economy. From museums, parks and historic places to archaeology, natural environment and cultural traditions, we invest in every part of our diverse heritage.  HLF has supported more than 33,000 projects with more than £5billion across the UK.  www.hlf.org.uk.