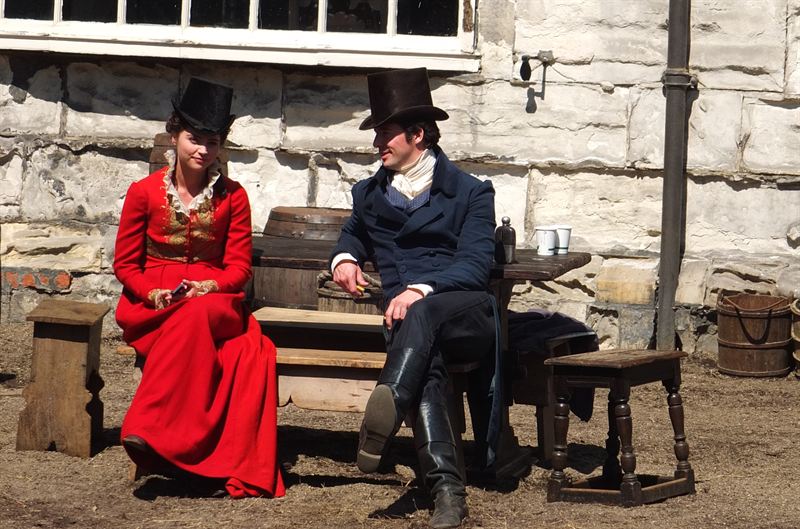 An iconic building within the precincts of York Minster will be seen by an audience of millions over the Christmas period when the BBC screens ‘Death Comes to Pemberley’, a costume drama penned by PD James which revives the characters of ‘Pride & Prejudice’ in a nail-biting murder mystery.

For a week during the summer, College Street – which sits beneath York Minster’s East End – was transformed from modern thoroughfare into a Georgian street, with the entrance to St William’s College dressed to provide an inn for heroine Elizabeth Darcy’s sister, Lydia, to elope with the cad Wickham.

The cast includes a host of famous faces including Anna Maxwell Martin as Elizabeth, Doctor Who’s Jenna Coleman as Lydia, Matthew Goode as Wickham and Matthew Rhys as Mr Darcy.

The historic college, which is owned by York Minster, also provided the backdrop for a number of other scenes with the interior courtyard doubling as a tavern while the period interior rooms were dressed and used for different scenes.

“Seeing the street transformed and every trace of modern York erased to turn back the clock 200 years was quite an experience – the shops neighbouring the college were re-dressed as grocers and tailors and even the cobbles were covered with earth for a rustic village appearance, complete with traders and livestock,” comments Morwen Ayres, York Minster’s conference and banqueting manager.  “The cast and crew were an absolute pleasure to have around, and when they had finished filming, within hours the street had been restored to its 21stcentury glory, leaving not a clue that they had been there!”

Death Comes to Pemberley airs on BBC1 on Boxing Day and for the following two evenings.