YUMA, ARIZONA - Yumans anxious for a sign that triple-digit temperatures are on their way out can start looking skyward soon for a colorful harbinger of seasonal change: hot-air balloons.

Balloons Over Yuma, the area's only commercial balloon flight operator, will launch its winter season October 15 and continue daily operations through May 2012.

Company owner and chief pilot Colin Graham says Yuma is one of his favorite places to fly.  And since Graham has flown in thirty states and five countries -- including Inner Mongolia, China, Mexico and New Zealand -- over the past 15 years, that's not just hot air.

The company debuted here last fall, after Graham was encouraged to enter the Yuma market when a former balloon operator suspended local operations due to an out-of-state move.

Balloons Over Yuma offers flights at sunrise and sunset seven days a week, weather permitting.  Average flight time ranges from 45 to 90 minutes, depending on the winds, though the total "ballooning experience" may take from three to four hours.  For details, visit www.balloonsoveryuma.com .

Yuma Visitors Bureau markets the Yuma area within the travel and tourism industry and to the general public. Direct travel spending in Yuma County totaled more than $566 million in 2010, supported nearly 5,800 jobs and generated $36.3 million in state and local tax revenues.

A longtime favorite with sun-seeking snowbirds, Yuma's population nearly doubles in the winter months, thanks to more than 23,000 spots in RV parks and resorts. The community also offers nearly 4,000 hotel rooms, conference and meeting facilities, and three casinos.

For more details about Yuma's year-round attractions, special events - and the rarely "cloudy with a chance of tacos" forecast* - visit www.visityuma.com or call 800-293-0100.

* Yuma hotel guests will eat free every day the sun doesn't shine from Aug. 1, 2011 until July 31, 2012! For more information on our Centennial "free board" promotion, call us. 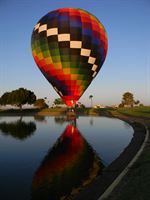