MAMMA MIA! BEHIND THE MOVIE MAGIC OPENS SATURDAY, APRIL 6th 2019. THE EXHIBITION RUNS AT ABBA THE MUSEUM IN STOCKHOLM UNTIL APRIL 2020. 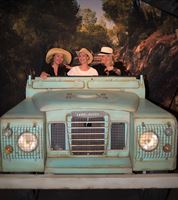 ABBA The Museum proudly presents a new interactive exhibition – Mamma Mia! Behind The Movie Magic. The exhibition will show props, costumes including Meryl Streep’s famous dungarees, Stellan Skarsgård’s disco outfit and Lily James’s jeans, drawings and more from behind and in front of the camera.The idea is to show the work behind the films – Who was in the cast? Where were they filmed? Which technology was used? These are just some of the many questions that the exhibition answers. Music plays a crucial role in the Mamma Mia! Movies. The stories are built on ABBA’s treasure trove of

ABBA THE MUSEUM HAS EXPANDED!

THE MOST COMMON QUESTION WE HAVE HAD OVER THE YEARS IS: WHAT HAPPENED AFTERWARDS? WHAT HAPPENED WHEN THE MEMBERS WENT THEIR SEPARATE WAYS? NOW, PREMIERING IN MAY 2018, WE ARE TELLING THE WHOLE STORY AT ABBA THE MUSEUM! #ABBATheMuseum #PopHouseStockholm Thirty-six years have passed since Sweden’s most successful musical export stopped performing together, but their songs are being played today more than ever. Five years after the opening of the museum, comes a completely new exhibition about the group’s members at ABBA The Museum in Stockholm, Sweden – an exhibition depicting everything