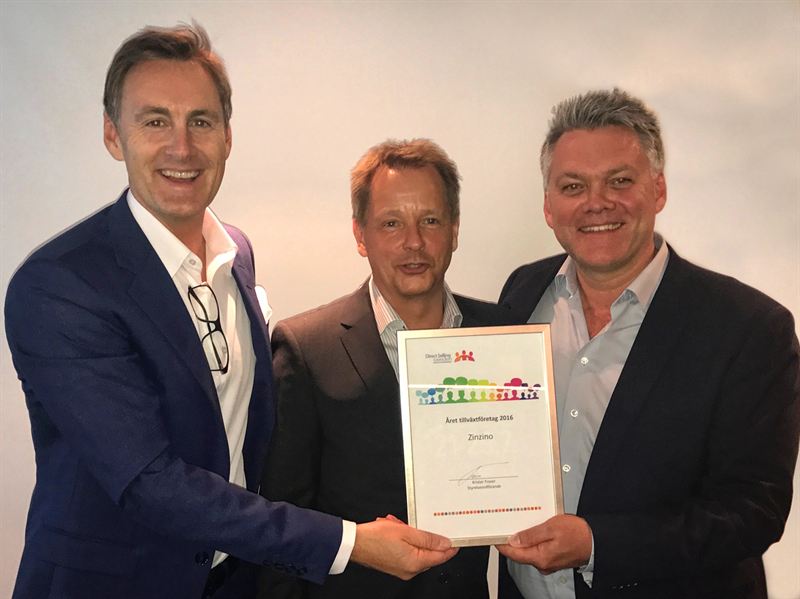 A very happy and proud Dag Bergheim Pettersen, CEO at Zinzino AB, was in Gothenburg to receive the award.
“This award belongs to all our Partners and Customers in Sweden that put their heart and soul in our common business day in and day out. I’m very proud today. It also confirms that our focus on building a business with customer focus is the way forward.”, says Dag.

Direct Selling Sweden, is the direct selling association for companies involved in Direct Sales, including members like Oriflame, Mary Kay, Forever Living and others.

” Usually there are discussions on measuring growth. You can either measure growth in absolute numbers or in percentage. But this year, Zinzino succeeded in the extraordinary achievement to be the company with the highest growth in both absolute numbers as well as the highest growth in percentage. Simply an outstanding achievement”, says Krister Fraser, Chairman of Direct Selling Sweden.

Zinzino AB (publ) is obliged to publish this information in com pliance with current EU regulations governing market abuse. The information was provided by the above contact person for publication at 4.00 pm on 2nd of June, 2017.


Zinzino AB (publ.) is a direct sales company which operates throughout Europe and North America. Zinzino markets and sells products in two product lines, Zinzino Health, with a focus on long-term health, and Zinzino Coffee, consisting of espresso machines, coffee and tea.

Zinzino owns Norwegian research unit BioActive Foods AS and the production unit Faun Pharma AS. Zinzino has more than 120 employees. The company has its headquarters in Gothenburg, and offices in Helsinki, Riga and Oslo, and in Florida, United States. Zinzino is a publicly held limited company and its shares are listed on Nasdaq First North.

Zinzino was designated in 2016 both as one of Veckans Affärer’s ”Super Companies” and as Dagens Industri’s Gazelle Company.