Muslim Group Partners With Red Cross to Collect Over 120 Pints of Blood at U.S. Capitol Hill to Honor 9/11 Victims 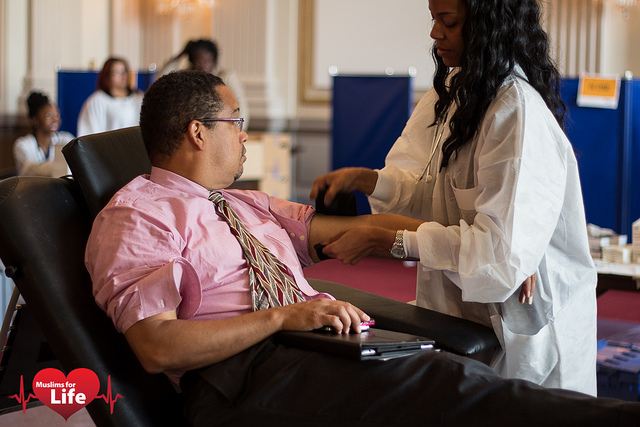 Nationwide “Muslims for Life” campaign holds over 400 blood drives with goal of collecting 11,000 pints of blood

The Ahmadiyya Muslim Community USA received bipartisan support this week for its 9/11 memorial blood drives at the Rayburn and Cannon congressional buildings as part of its nationwide “Muslims for Life” campaign.  The campaign commemorates the 11thanniversary of 9/11 by collecting 11,000 pints of blood and by spreading the message that Islam emphasizes the sanctity of all human life.

“There is a searching in this country to see what is the best way to remember the tragedy of 9/11,” said U.S. Congressman Brad Sherman. “The appropriate response is with brotherhood and a rejection of death, violence and bigotry.  There is simply nothing more life affirming and no greater way to reject the philosophies of hate than to hold a blood drive.  I want to commend ‘Muslims for Life’ but especially the Ahmadiyya Muslim Community USA for putting this campaign together.  It is an inspiration for all Americans who are seeking ways to remember 9/11.”

“This is a wonderful project.  Out of a tragedy some good has come,” said U.S. Congressman Tom Petri. “Now for a second year, thousands of pints of blood have been donated all across the United States, and the effort continues.  People are living their religion and doing good works.  Actions speak louder than words.”

“In remembering and honoring those who lost their lives on 9/11 through the ‘Muslims for Life’ blood drive, the Ahmadiyya Muslim Community USA has once again shown leadership in uniting people of all faiths, in a gesture of giving,” said U.S. Congressman Frank Wolf. “I appreciate the work you have done and continue to do to promote religious freedom and tolerance not only here in the U.S. but throughout the world.”

In the end, over 120 donors participated in the blood drives on Capitol Hill.  Through this campaign, the Community has organized over 400 blood drives in over 200 U.S. cities to save as many as 33,000 American lives.

“The perpetrators of the horrific attacks on our country 11 years ago do not represent Islam or Muslims,” says Naseem Mahdi, Vice President of the Ahmadiyya Muslim Community USA, who is overseeing the campaign. “Islam values all human life and fundamentally stands for peace. Through this campaign, we illustrate that the only blood we shed is to save lives.”

About the Ahmadiyya Muslim Community:

The Ahmadiyya Muslim Community is the only Islamic organization to believe that the long-awaited messiah has come in the person of Mirza Ghulam Ahmad (1835-1908) of Qadian, India. Ahmad claimed to be the metaphorical second coming of Jesus of Nazareth and the divine guide, whose advent was foretold by the Prophet of Islam, Muhammad (peace be upon him). The Community believes that God sent Ahmad, like Jesus, to end religious wars, condemn bloodshed and reinstitute morality, justice and peace. Ahmad’s advent has brought about an unprecedented era of Islamic revival and moderation. He divested Muslims of fanatical beliefs and practices by vigorously championing Islam’s true and essential teachings.