Ahmadiyya Muslim Community heralded as antidote to extremismPRESS RELEASE For Immediate Release:August 18, 2014 Civic, political and religious leaders lauded the efforts of Ahmadiyya Muslim Community USA during its 66thAnnual Convention this past weekend in Harrisburg, Pennsylvania.  More than 7,000 people attended the oldest and longest lasting Muslim convention in America to participate in its presentations and breakout meetings. The focus of this year’s convention was to discuss faith’s role as the antidote to the world’s crises. The weekend-long convention was streamed live,

Over five thousand from across the US to attend longest running American Muslim conventionPress ReleaseFor Immediate Release:August 8, 2014 Ahmadiyya Muslim Community USA, one of the nation’s oldest American Muslim organizations, celebrates its 66th annual Jalsa Salana Peace Conference in Harrisburg, Pennsylvania.The event will take place August 15th to August 17th at the Pennsylvania Farm Show Complex & Expo Center in Harrisburg, Pennsylvania. The three-day conference will include presentations on the following topics, for which subject matter experts are available for interviews:

Nearly 100 delegates participate in annual “Day on the Hill” eventThe Ahmadiyya Muslim Community USA received bipartisan support last Friday, February 15, for its third annual “Day on the Hill.”  The event drew Community leaders from over 70 chapters and 30 states.  Delegates to the event briefed a broad array of U.S. lawmakers on the ongoing global persecution of religious minorities, particularly in South and Central Asia and the Middle East.  Delegates expressed particular concern over the uptick of violence against religious minorities in Pakistan and the need for Pakistan to hold

Muslim Group Partners With Red Cross to Collect Over 120 Pints of Blood at U.S. Capitol Hill to Honor 9/11 Victims

Nationwide “Muslims for Life” campaign holds over 400 blood drives with goal of collecting 11,000 pints of bloodThe Ahmadiyya Muslim Community USA received bipartisan support this week for its 9/11 memorial blood drives at the Rayburn and Cannon congressional buildings as part of its nationwide “Muslims for Life” campaign.  The campaign commemorates the 11thanniversary of 9/11 by collecting 11,000 pints of blood and by spreading the message that Islam emphasizes the sanctity of all human life. Republican and Democratic lawmakers voiced their strong support for the blood drives.

Nation’s oldest Muslim organization sends condolences and calls for peace and justiceAhmadiyya Muslim Community USA – the oldest Muslim organization in America – strongly condemns this morning’s senseless shooting on worshipers gathered at the Sikh Temple of Wisconsin in the city of Oak Creek, near Milwaukee. While details of the attack continue to emerge, such brutality and hatred does not represent the otherwise tolerant and peaceful relationships between faith communities in this nation, and Ahmadiyya Muslim Community USA calls on all people of conscience to condemn this act.

His Holiness to speak at Capitol Hill and attend oldest annual Muslim conventionThousands of American Muslims wait in anticipation for the historic U.S. visit of His Holiness Mirza Masroor Ahmad, worldwide spiritual and administrative head (Khalifa) of the Ahmadiyya Muslim Community, in June.  As the Muslim leader commanding the largest following of Muslims in the world, His Holiness visits the U.S. shortly after contacting several world leaders -- including President Barack Obama, Israeli Prime Minister Benjamin Netanyahu, Iranian President Mahmoud Ahmadinejad -- to resolve international

Ahmadiyya Muslim Community launches nationwide campaign to bring fellow Americans towards true peaceAhmadiyya Muslim Community USA announces the launch of a new nationwide campaign that provides holistic solutions to our nation’s problems. Just like the deteriorating world conditions, millions in this country have suffered grief, injustice, unemployment, foreclosures and hardships – while a few in positions of power fed their own insatiable greed.  As such, people are searching for any kind of peace – social peace, economic peace, political peace, personal peace and even interreligious

Vandalism at houses of worship must be stoppedAhmadiyya Muslim Community USA condemns the vandalism committed on a new Sikh temple under construction in Sterling Heights, Michigan, on February 6th, 2012. In this targeted attack, vandals spray-painted the walls of the temple with an obscenity, a picture of a gun, a cross and a reference to the Prophet Muhammad. Such an incident illustrates not only ignorance of different faith traditions in America but also a growing religious intolerance that must be cured. Ahmadiyya Muslim Community USA extends its condolences and sympathy to the Sikh

Oldest American-Muslim organization calls for end to fear mongeringFor Immediate Release: January 3, 2012 The Ahmadiyya Muslim Community USA calls for an end to the growing fear of Islamic Shariah in the United States.  Shariah is not a threat to our nation.  Instead, Shariah is a set of Islamic regulations and guidelines that govern the personal and private beliefs and actions of a Muslim, similar to the Halacha for Jews and Cannon for Christians.  The supposed Shariah practiced in some Muslim-majority countries does not reflect the true Islamic concept of Shariah.  As the leading

Members of Congress and Muslims Unite

Congress members laud Muslim effort to honor the memory of 9/11For Immediate Release: September 13, 2011 The Ahmadiyya Muslim Community USA received bipartisan support last week for its 9/11 memorial blood drive in the Cannon congressional building as part of its nationwide “Muslims for Life” campaign, which aims to honor the 10thanniversary of 9/11 and underscore the message that Islam emphasizes the sanctity of all life. Congresswoman Jackie Speier (D-CA) was the first to show her support by donating blood.  “I join with the Ahmadiyya Community and the American Red Cross to pay

Leader of the Ahmadiyya Muslim Community USA speaks with President Obama about 9/11 commemorationThe Ahmadiyya Muslim Community USA’s National Vice President, Mr. Naseem Mahdi, attended the annual White House Iftar Dinner last night, along with other American  Muslim leaders. President Obama highlighted the many contributions and services of American Muslims.  He also paid tribute to the brave men and women, including several American Muslims, who perished on 9/11: "We must be the America they lived for, and the America they died for." To commemorate the ten year anniversary of 9/11, 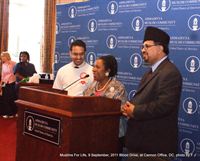 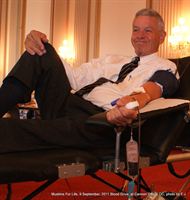