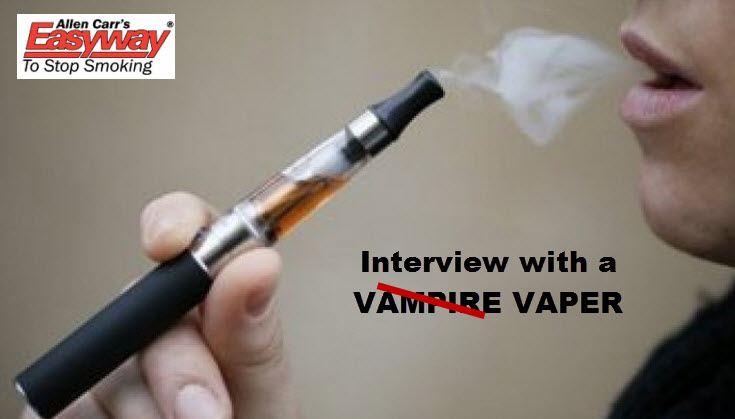 Interview with a VAPER! An e-cigarette user case study!

There is now real evidence which confirms the findings of Allen Carr’s Easyway To Stop Smoking Organisation’s survey in March 2014 which indicated that 84% of e-cigarette users continue to smoke normal cigarettes or return to normal smoking entirely.

John Dicey, Worldwide Managing Director of Allen Carr’s Easyway comments “As soon as the e-cigarette phenomenon hit the UK we immediately became aware that e-cigarette users were smoking normal cigarettes whenever they could and using e-cigarettes at times when they couldn’t. We also discovered that many of the e-cigarette users who were attending our clinics understood that their intake of nicotine had actually dramatically increased since they started vaping. They found that they vaping inside the home and other places where previously they’d have been forced to go outside to smoke a real cigarette – thus forcing them to cut down.”

It will be years before the negative health effect of using e-cigarettes (delivering high levels of poisonous nicotine) along with continued use of normal cigarettes is known.

Dicey continues “It really is a ‘back to the future’ kind of situation. In the 1940s and 1950s doctors and health professionals would actually recommend that patients smoke and even endorse certain brands. It took Professor Sir Richard Doll decades to make the findings of his study in the 1950s linking smoking to lung cancer and other chronic diseases accepted - during which time generations of smokers became addicted and paid the ultimate price. Millions of lives were lost because of the speed (or lack of it) at which his findings were accepted.

Today, some really big hitters in the anti-tobacco and medical establishment are making a huge mistake by pushing smokers towards e-cigarette use thereby ensuring that they carry on smoking and vaping and therefore in many cases increasing their intake of nicotine. They seem entirely blind to the dangers of the phenomenon they’ve helped create. Aside from that - the biggest issue by far is the sudden re-normalisation of smoker/smoker-like behaviour which is already having a huge impact on youngsters picking up e-cigarettes and normal cigarettes.”

On 1st January 2014 Allen Carr’s Easyway Organisation extended its famous worldwide money back guarantee (for their stop smoking clinic programme) to include e-cigarettes.

Dicey confirms “The fabulous thing about the Easyway method is that it can work for any smoker – light, heavy, casual, or even someone using e-cigarettes. It was a simple decision to include e-cigarettes in our money back guarantee and incredibly reassuring for those people who feel they have fallen into an even deeper trap by using e-cigarettes as well as smoking normal cigarettes.”

Paul Palmer, 28, from Haverhill, Suffolk, UK is just one of many former e-cigarette users who stopped smoking and vaping using Allen Carr’s Easyway To Stop Smoking method. He’d tried to stop smoking many, many times before without success until he finally quit in June 2014.

Paul says “Yes, I attempted to stop smoking with electric cigarettes, the disposable ones you can buy.  They were OK but very strong and very expensive. I think I paid £4.50 for one cigarette, it was advertised as being the equivalent of 40 cigarettes however it lasted me less that 2 days and keeping in mind I only smoked maybe between 3-5 a day there was no way I was going to spend £4.50 every 2 days, it was cheaper to smoke!!! So I went back to smoking!!!

Further down the line I heard about the electric Shisha pens, they are actually quite good and relatively cheap to buy - around £15 - which included everything.  They charge up and you can buy all different flavours of liquid nicotine to put in them. I have to say I did use one of these for a few months, but again it is not the same as smoking an actual cigarette.  When I smoked normal cigarettes I’d ritually go downstairs out of my flat and stand outside. I used to use it as thinking time with all sorts of things running through my head. However with the e-cigarettes I would just sit on the sofa and puff on it every now and again. In the end it turned out I was using it A LOT MORE than I used to smoke. As a smoker I’d have to make the effort to go outside and smoke whereas the Shisha was too easy! So in the end, it kind of fizzled out, I couldn’t be bothered to keep charging it up and slowly went back on to smoking the ‘real thing’ – normal cigarettes.

After using Allen Carr’s Easyway To Stop Smoking method I realised that using e-cigarettes was just keeping me addicted to nicotine – I was still hooked and controlled by the drug. Now that nicotine monster is dead and it feels wonderful! Allen Carr takes every excuse you can imagine for carrying on smoking and explains why it’s fake or phoney. You end up with no reasons to smoke – it’s that easy."

Smokers and vapers can access free Allen Carr’s Easyway information films. They are not designed to help the individual stop smoking/vaping but include interesting and useful information to help when the smoker/vaper feels they do want to stop. Like a pre-quitting training course!

The organisation also provides help with issues such as alcohol, weight control, drug use, gambling, and debt.

The method has helped millions of addicts escape from addiction.Allen Carr's Easyway has sold over 14,000,000 books worldwide.

There are stop smoking seminars in more than 150 cities in over 50 countries worldwide.