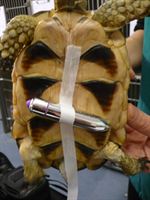 A sick tortoise, which had been kept in a glass tank and had become severely constipated having eaten the gravel and stones on its cage floor, has recovered after an ‘adult sexual aid toy’ was used as a vibrating massager strapped to the underside of its shell. On arrival at the vets in Barons Court, London, the poorly tortoise was very weak and its head was withdrawn, probably due to pain. However, after a twice-a-day treatment for several weeks with the vibrator, the tortoise came out of its shell and is now strong and healthy. This novel treatment has been published by the Journal of

Exotic pet markets in your town could seriously damage your health!

A new independent scientific study published in the Journal of the Royal Society of Medicine has concluded that reptile and amphibian markets in the UK and elsewhere in Europe ‘constitute a significant and major public health concern’. The findings confirm the risks to visitors, but go further to state that there is no need to visit an exotic pet market in order to be contaminated and potentially infected!Independent scientists, specialised in reptile and amphibian biology and public health, conducted the study in 2011 at markets in the UK, Germany and Spain. They carried out observations

EC survey says 8 out of 10 want restriction on exotic species in trade!

Results of a European Commission survey* on invasive alien species (IAS) have been welcomed by the Animal Protection Agency, an organisation that campaigns against the trade in wild animals as pets. Of over 5,000 respondents to the survey (which ended in April 2012), more than 80% indicated they wanted restrictions on the sale of exotic species of animals and plants.The online public consultation was carried out to inform the forthcoming EU Invasive Alien Species Strategy.  Despite a particularly high response to the survey from vested interest hobbyists as well as traders who oppose

A new scientific study of the exotic pet trade has found that at least 75% of pet snakes, lizards, tortoises and turtles die within one year in the home. It is thought that most of these newly purchased animals, whose natural longevities range from 8-120 years according to species, die from captivity stress-related causes.In an article in the latest issue of The Biologist, published by the Society of Biology, scientists compared the number of reptiles that enter the UK market each year to the numbers of reptile pets that reside, year on year, in private homes. Based on these figures, the

“Kidderminster is fast becoming a haven for illegal wildlife dealers”

Wyre Forest District Council has come under fire for yet again facilitating an exotic pet market this Sunday 29th July 2012 at the Wyre Forest Glades Leisure Centre. Trading in pet animals at market stalls was outlawed in 1983, but the Council, which has a duty to enforce the legislation and is also a landlord of the property, has turned a blind eye to illegal reptile and amphibian traders that now operate regularly from the leisure centre.The Animal Protection Agency (APA), which campaigns against the trade in wild animals as pets, provided the Council with ample evidence to act on the

Doncaster Council has reaffirmed its commitment to ‘vigorously enforce’ a no animal selling rule at a reptile market planned for tomorrow 17 June 2012 at the Dome, Doncaster. Following input from the Animal Protection Agency and the RSPCA, the Council stated that it would not allow sales of any animals whatsoever at a proposed animal market this Sunday, and that the Council would carry out its duties as enforcers and prosecute offenders. Exotic pet markets, such as the one advertised to take place this Sunday, have been likened by some observers to large jumble sales. However, instead of

A reptile market due to take place on Sunday 20th May 2012 at Walton Hall, Warrington has been cancelled. The Animal Protection Agency (APA) advised Warrington BC that the event, billed as a reptile ‘show’, would not be just a show but would involve illegal animal trading. Prompt and decisive action by Warrington Borough Council Officers has meant that the market will not now take place, sparing animals the inhumane treatment inherently associated with these events.In 1983, trading in pet animals at markets stalls was banned in an amendment to the Pet Animals Act 1951, as animal welfare

For immediate release The first planned reptile market this year – and one of only a handful of remaining markets of its kind in the UK - has been cancelled. The event, due to take place today (12 May 2012) at the Castle Green Sports Centre in Dagenham would have involved illegal wild animal dealing but thanks to a tip off from the Animal Protection Agency (APA), and the work of conscientious Council officials, the event will not now be taking place. APA was advised by Barking & Dagenham Council Licensing Section that the event had been booked as an animal exhibition but APA informed

For the second year running, the London Pet Show, due to take place on 12-13 May at Earls Court Two, is heavily promoting the exotic pet trade. The Animal Protection Agency (APA) has condemned the Show promoters for being out of step with modern scientific evidence, which shows the harm inherent to exotic pet-keeping. Leading animal welfare groups and the veterinary community are becoming increasingly concerned about the suffering of wild animals in private ownership.Exotic pets are wild, non-domesticated animals that thrive in specific ecosystems. In captivity, the natural environment of

Scientists call for a ban on exotic pet markets across the EU to protect animal welfare, public health and biodiversity

A new independent scientific report, released today, has resulted in calls for an EU-wide ban on exotic pet markets to protect animal welfare, public health and biodiversity. The report, commissioned by the Animal Protection Agency, International Animal Rescue, Eurogroup for Animals and other European animal protection groups, was this week presented to Caroline Lucas MP and Keith Taylor MEP.Scientists investigated amphibian and reptile markets across Europe and carried out onsite inspections of key events in the UK, Germany and Spain. In the UK, scientists visited the Doncaster Dome on 18