Blood cancer patient wants to help save others’ lives 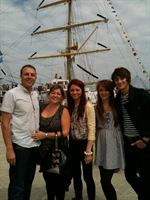 Marton resident, Lisa Larkin, is calling upon her fellow Teessiders to find out whether they could save a life.  Lisa, 40, was diagnosed with aggressive non-Hodgkin’s lymphoma, a type of blood cancer, in April this year and needs a blood stem cell (or bone marrow) transplant to save her life.Luckily, Lisa’s sister, Louise, 38, is a perfect match for her, making her the ideal donor for Lisa. However, 70% of blood cancer patients don’t have a matching donor within their families, leaving them to rely on strangers who have joined the Anthony Nolan register of potential donors. The charity

A Kingston family will meet the woman who saved their daughter’s life next week, when they travel to Bedford to meet her blood stem cell (or bone marrow) donor. Ella Paul, 3, will travel with her parents Mark Paul and Jackie Dancer to meet Julie Healy, on Saturday 9 April.Ella was diagnosed with leukaemia when she was just 3 months old. She underwent intensive chemotherapy to rid her body of the disease but her parents were then told she needed a stem cell transplant to save her life. She received her transplant in October 2008, but strict regulations prevent donor and patient for meeting

Bedford resident Julie Healy, will come face to face with the girl whose life she saved for the first time. Julie donated her blood stem cells to Ella Paul, 3, who had leukaemia and needed a lifesaving stem cell transplant (often known as a bone marrow transplant.).  Ella and her parents, Mark Paul and Jackie Dancer, will travel to Bedford to meet Julie on Saturday 9 April.Julie, 49, joined the Anthony Nolan register 30 years ago, when she spotted a stall at a steam rally event.  Anthony Nolan saves the lives of people with blood cancer by matching them to people willing to donate their

Stuart Halfpenny, from West Sussex, is running the London Marathon on 17 April for Anthony Nolan, a charity that saves the lives of people with blood cancer who need blood stem cell, or bone marrow, transplants. Stuart has strong links with the charity, as he joined the Anthony Nolan register in 2004, donated blood stem cells in 2006, and ran the London Marathon to raise funds for them in 2007. In 2009, the person who received Stuart’s donated stem cells made contact with him, and they met up a year later. Sadly, four months after meeting, Stuart’s recipient died. Stuart, 33, says, “The

Chesterfield’s Pomegranate Theatre is staging a special production for charity on Saturday 19 March in memory of local playwright Richard Woolley, who died from leukaemia in 2009, aged 26. All proceeds from the performance of Tabasco, one of several award-winning plays written by Richard, will be split between Anthony Nolan and Leukaemia & Lymphoma Research, two charities that save the lives of people with blood cancer. Richard, a news journalist for Johnston Press, was diagnosed with leukaemia in 2008 and, despite receiving treatment, he sadly passed away in October 2009. Richard’s

Ellen Marshall, from Little Bromley, faces the challenge of a lifetime when she runs the London Marathon on 17 April. She will be raising money for Anthony Nolan, a pioneering charity that helps save the lives of people with blood cancer who need a blood stem cell transplant – and also her new employer. Ellen, 25, decided to run for Anthony Nolan after hearing about the charity through friends. She explains, “A few of my friends have raised money for Anthony Nolan in the past, so I’ve always been aware of their work. I’ve already joined the Anthony Nolan register but I wanted to do