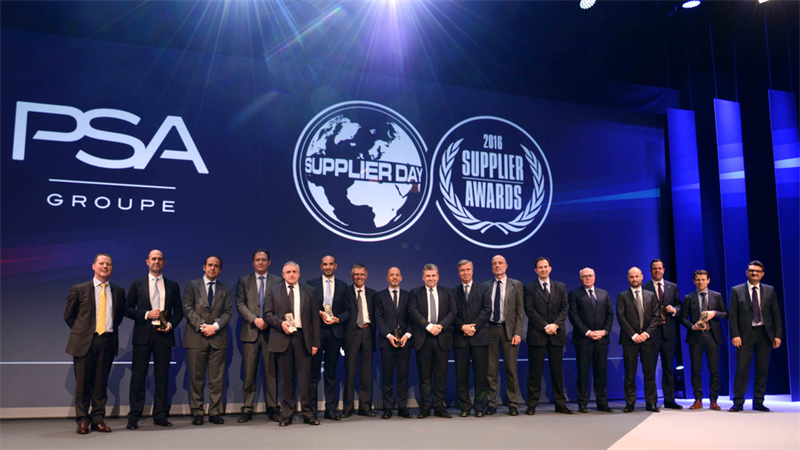 ArcelorMittal was awarded the prize at PSA Group’s 12th annual best supplier awards ceremony, during which Carlos Tavares, chairman of the managing board of PSA Group and Yannick Bézard, the group’s executive vice-president for purchasing, honoured 15 suppliers for their commitment and quality of response to PSA Group expectations.

Speaking at this year’s event, Yannick Bézard said: "ArcelorMittal is involved in all PSA Group’s projects to enhance competitiveness: from innovation to serial production. ArcelorMittal is working on weight and cost savings, and finding the best material solution for each vehicle. The best example of this is the systematic review of the car’s body structure, which we undertake in the very early stage of all our new projects. This approach leads to average cost savings of €5 to €8 per car. Another example is ArcelorMittal’s ability to team up with stamping companies to boost their VA/VE proposals."

VA/VE stands for Value Analysis/Value Engineering, and is a systematic and organized procedural decision-making process which allows ArcelorMittal to creatively generate alternative solutions which secure essential functions, at the greatest value and the lowest cost.

Philippe Aubron, CMO Automotive Europe for ArcelorMittal, said: “We are delighted to have received a best supplier award from PSA Group for the second year in a row, as this clearly demonstrates our customer’s continued faith in our ability to enhance their competitiveness and create value.”

With its three world-renowned brands, Peugeot, Citroën, and DS, the PSA Group sold 3 million vehicles worldwide in 2015. It is the second-largest carmaker in Europe. Since 2011, ArcelorMittal has held the status of strategic supplier to PSA Group’s automotive operations.

ArcelorMittal employs more than 80,000 people and produces approximately half of its total steel volume in Europe. With a presence in 17 European countries and around 400 different sites, ArcelorMittal Europe had revenues of €29 billion and a crude steel production of 44 million tonnes in 2015. We supply flat and long steel products for all major steel markets, including the automotive, construction, packaging and household appliances industry – supported by a leading R&D and distribution network with 9 laboratories and 1,000 full-time researchers in Europe.

Worldwide
ArcelorMittal is the world's leading steel and mining company, with a presence in 60 countries and an industrial footprint in 19 countries. Guided by a philosophy to produce safe, sustainable steel, we are the leading supplier of quality steel in the major global steel markets including automotive, construction, household appliances and packaging, with world-class research and development and outstanding distribution networks.

Through our core values of sustainability, quality and leadership, we operate responsibly with respect to the health, safety and wellbeing of our employees, contractors and the communities in which we operate.

For us, steel is the fabric of life, as it is at the heart of the modern world from railways to cars and washing machines. We are actively researching and producing steel-based technologies and solutions that make many of the products and components people use in their everyday lives more energy efficient.

We are one of the world’s five largest producers of iron ore and metallurgical coal and our mining business is an essential part of our growth strategy. With a geographically diversified portfolio of iron ore and coal assets, we are strategically positioned to serve our network of steel plants and the external global market. While our steel operations are important customers, our supply to the external market is increasing as we grow.

In 2015, PSA Group spent a total of €21 billion on materials. More than €16 billion was spent on standard parts and components which account for more than 80% of a vehicle's production cost on average. The Group works with a panel of 1,400 suppliers and encourages local sourcing in all of its facilities. For example, PSA’s French automobile plants source around 50% of their purchases from France and more than 90% from Europe.

With its three world-renowned brands, Peugeot, Citroën, and DS, the PSA Group sold 3 million vehicles worldwide in 2015. As the second-largest carmaker in Europe, the PSA Group recorded sales and revenue of €54 billion in 2015. The Group has confirmed its position as European leader in terms of CO2 emissions, with average fleet emissions of 104.4 grams of CO2/km in 2015. With a fleet of 1.8 million connected vehicles on the road worldwide, the Group is on the cutting edge of innovation in this field, and is expanding its services as a mobility provider. PSA Group is also involved in financing activities (Banque PSA Finance) and automotive equipment (Faurecia).