Arhaus offers a compelling, inspiration-filled environment—stores average 20,000+ sq. ft.—filled with one-of-a-kind handcrafted home furnishings reflective of a distinct global point-of-view. Arhaus collaborates with skilled artisans all over the world who craft its many exclusive collections, which are complemented by timeless upholstered pieces (slipcovered, leather and custom-ordered seating), indoor and outdoor dining tables and chairs, bedroom and office furniture, seasonally-inspired accessories, private label bedding, throws and accents, and more. Made of the world’s finest materials (with attention to sustainability), products are presented in dramatic lifestyle settings infused with original architectural elements imported from Parisian flea markets and Tuscan villas, hand-painted murals, Arhaus Relics, or repurposed antiques, and the freshest botanicals sourced locally in each store market. Privately owned and operated, currently there 40+ stores in the U.S. The home furnishings retailer was founded in 1986 by father and son, Jack and John Reed, and is headquartered in Cleveland, OH. For more information, call 866.427.4287 or visit us on the web at arhaus.com.

Arhaus Shelter opened its doors October 1 with posts about philanthropic activities, home décor trends and things to do in Ann ArborCLEVELAND (November 1, 2013) – Arhaus Furniture, known for its globally inspired assortment of handcrafted home fashions and inspirational in-store experience, launched its first-ever blog, Arhaus Shelter, http://blog.arhaus.com/welcome, October 1. In its introductory week, posts ranged from the retailer’s fundraising efforts benefiting Global Dental Relief, http://globaldentalrelief.org, to a profile of a winner of our Club Sofa on blog Young House Love, to

CLEVELAND (September 27, 2013) – This week, Arhaus Furniture has finalized two lease agreements for a total of 30,654 square feet. Next year, the Cleveland-based retailer will occupy space at The Mall in Columbia, Maryland, and Northbrook Court in Northbrook, Illinois, bringing total store count to 53 and 19 states at year-end 2014. The space at 3110 The Mall in Columbia is 13,365 square feet (one floor) and situated in between AT&T and Soma. With the Columbia store location—slated to open in April 2014—Arhaus will have a total of four stores in Maryland; Baltimore’s Harbor East store

Dollars raised at 46 stores and Arhaus.com to support clinics and continued care for children around the worldCLEVELAND (September 24, 2013) – Arhaus Furniture closes the month of August and its Annual Storewide Sale with the announcement of a $50,000 gift to Global Dental Relief—a children’s charity started in 2001 with the goal of providing much needed dental care in impoverished nations around the world. The donation is the result of a percent of sales campaign held in 46 Arhaus stores and online at www.arhaus.com. From August 1 to August 31, a percent from the sale of lighting— 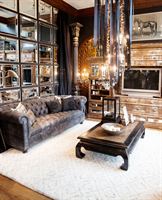 Store locations in Florida, Georgia, Illinois and Connecticut scheduled for 2014 openingsCLEVELAND (August 23, 2013) – Arhaus Furniture has finalized a number of new lease agreements in Danbury, Conn., Schaumburg, Ill., Jacksonville, Fla., and Alpharetta, Ga., increasing its total store count in the fall of 2014 to 51 and 19 states. This announcement comes on the cusp of the retailer opening three stores earlier this year; two in Texas at Centre at Old Post, 5000 Westheimer Rd., in Houston, and the Domain, 3309 Esperanza Way, in Austin, and one in Marlton, at the Promenade at Sagemore. “

Retailer now renovating 24,000+ sq. ft. space at NorthPark Center for a summer 2014 openingCLEVELAND (May 9, 2013) – Arhaus Furniture, known internationally for its exclusive assortment of handcrafted home goods, is opening store no. 3 in Texas—this time in the Dallas/Ft. Worth market. The 24,000 sq. ft. gallery space at NorthPark Center, 8687 North Central Expressway, in Dallas sits between Neiman Marcus and Nordstrom on the upper level and marks the company’s 47th store to open in the U.S. The Dallas announcement for the retailer follows recent openings at Houston’s Centre at Post Oak