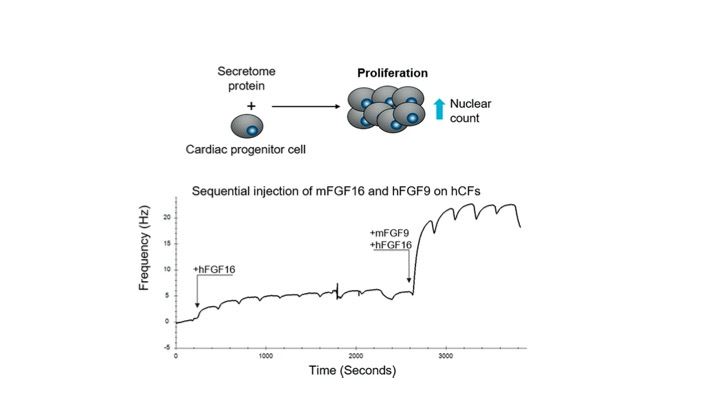 A new paper has been published in the International Journal of Molecular Science. In the paper, almost 1000 human human secretome proteins where screened to check if they could be involved in regeneration and repair of cardic cells post infarcts, thereby provide a better treatment than what is available today. 12 proteins demonstrated promising properties. Attana's QCM technology and expertise was employed to further understand and select the most suitable protein based on cell-based kinetic interaction characterisation and to demonstrated that the proteins interacts with different receptors.

Heart failure is a major cause of mortality worldwide and myocardial infarction is a common cause which results in the loss of a substantial number of cardiomyocytes. The available therapies for these patients can only slow down disease progression and reverse limited aspects of cardiac dysfunction. A treatment that can repair and stimulate growth of new cardiac cells would thus provide an improved treatment.

Paracrine factors can induce cardiac regeneration and repair post myocardial infarction by stimulating proliferation of cardiac cells. In the paper, a human secretome library consisting of 923 growth factors, cytokines, and proteins was screened with respect to proliferation rate of human cardiac progenitor cells. From this screen, 12 proteins displayed promising results. Two proteins, FGF9 and FGF16, were especially interesting. Both belong to the same FGF subfamily, share high sequence identity, and are described to have similar receptor preferences. However, FGF16 was shown to be specific for proliferation of cardiac progenitor cells, whereas FGF9 also proliferated human cardiac fibroblasts. Attana biosensor analysis of receptor preferences and quantification of receptor abundances suggested that FGF16 and FGF9 interact with different FGF receptors on the cardiac progenitor cells and cardiac fibroblasts. Taken together, the data suggest that FGF16 could be a suitable paracrine factor to induce cardiac regeneration and repair.