Bactiguard Employer of the Year 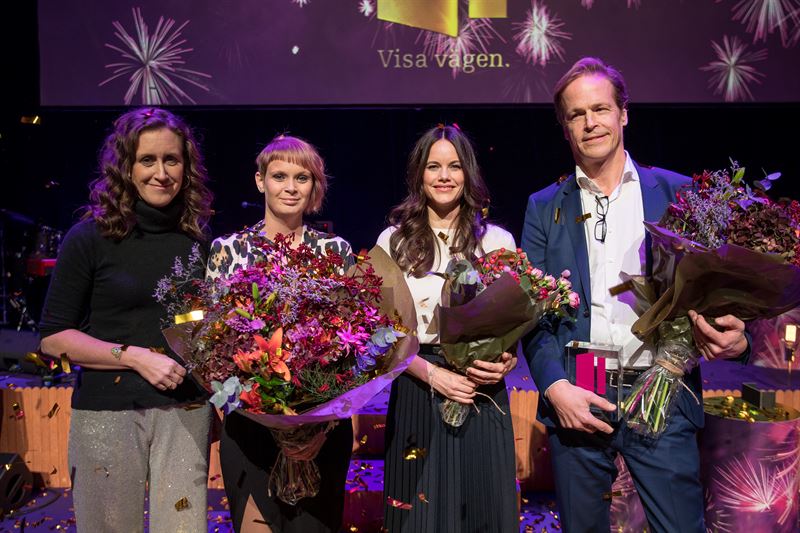 Bactiguard was yesterday awarded “Visa vägen-priset” as Employer of the Year. The prize, referred to as Sweden's most important labour market price, is awarded to companies and individuals who lead the way in the labour market by opening opportunities for people with disabilities.

The winners of Samhall’s “Visa vägen” prize were announced at a price ceremony in Stockholm in the presence of H.R.H Princess Sofia. Bactiguard was awarded Employer of the Year for its efforts in opening opportunities and breaking the exclusion in the labour market for people with disabilities.

Employer of the Year 2018: Bactiguard
“This year's Employer sees diversity as a cornerstone of its business concept. There is an uncompromising belief in the individual's ability to provide the company with a skill boost through his or her competencies. This year's Employer creates a team of different talents and succeeds in running a spearhead company in its industry, capable of competing internationally and at the same time securing jobs in Sweden. A striking evidence that diversity gives multiplicity in reward,” said the jury.

In 2015, Bactiguard moved into its new integrated headquarters near the Karolinska hospital, south of Stockholm. A strategic decision in connection with the move was to bring home production from China and start a collaboration with Samhall. Their employees are now responsible for the production of Bactiguard's infection prevention catheters. The cooperation has developed very well and now forms the basis of our Swedish production.

"Samhall's employees have become a very important part of our staff. They work with high technology production, performed in a clinically clean room and only accessible through locks," said Christian Kinch, Bactiguard's CEO.

“Winning the prize as Employer of the Year in Sweden is fantastic. The diversity and competencies of Samhall's employees help us grow and become stronger in the fight against healthcare associated infections," Christian Kinch continues.

"It's not about being nice. I often say that I am a results-oriented entrepreneur with a heart; we must deliver results while contributing to society. I believe that our cooperation with Samhall is a living proof, it gives us results and promotes integration, " Christian Kinch concludes.

Samhall’s “Visa vägen” Prize is also known as "Sweden's most important labour market prize" and has since 2008 been awarded to employers and individuals who in an exceptional way show the way in the labour market by working inclusively and looking at opportunities rather than obstacles among their employees.

This year, there were about 700 candidates for the two categories (Employer of the Year and Enthusiast of the Year) and nearly 30,000 people around the country helped to screen the 18 finalists who competed for the prestigious prizes in the finals.

About the Visa vägen” Prize
The prize is awarded by Samhall and acknowledges those who are at the forefront of people with disabilities and break their exclusion in the labor market.

The prize goes to the employers and enthusiasts who understand that it is more important to see what a person can do, instead of what they cannot. Simply to those who are wise enough to look for a person's abilities. Not to be nice and want to, but for the very best of their own business.

About Samhall
Samhall is one of Sweden's largest service providers. The company has over 24,000 employees throughout the country and offers services ranging from cleaning, laundry and property management to logistics, manufacturing and care. Samhall is owned by the Swedish state and has an annual turnover of SEK seven and a half billion. The company's core mission is to create developmental work for people with disabilities by matching the right person to the right work in competitive customer assignments.

About Bactiguard
Bactiguard is a Swedish medical device company with a mission to save lives. To achieve this mission we develop and supply infection protection solutions which reduce the risk of healthcare associated infections and the use of antibiotics. This way, we save significant costs for healthcare and the society at large.

The Bactiguard technology prevents bacterial adhesion and biofilm formation on medical devices. Bactiguard offers the technology through licence agreements and our BIP (Bactiguard Infection Protection) portfolio of products. Through our licence partner CR Bard, urinary catheters with Bactiguard’s coating are market leading in the USA and Japan. Bactiguard’s own product portfolio of urinary catheters, endotracheal tubes and central venous catheters prevent some of the most common infections, which appear in the urinary tract, the blood stream and the respiratory tract.

Bactiguard is in a strong expansion phase in the European markets, China, India and the Middle East as well by establishing license agreements in new therapeutic areas. The company has about 70 employees around the world. Its headquarters and one of two production facilities are located in Stockholm, the other one in Malaysia. Bactiguard is listed on Nasdaq Stockholm.