Bactiguard is a Swedish medical device company with a mission to save lives. To achieve this mission, we develop and supply infection prevention solutions which reduce the risk of infections and the use of antibiotics. This way, we save significant costs for healthcare and the society at large. The Bactiguard technology is based on a thin noble metal alloy coating that prevents bacterial adhesion and biofilm formation on medical devices. Bactiguard offers the technology through licence agreements and our BIP (Bactiguard Infection Protection) portfolio of products. Urinary catheters with the Bactiguard technology are market leading in the USA and Japan through our licensing partner BD, and in 2021 orthopaedic trauma implants, ZNN Bactiguard, were launched by Zimmer Biomet. Bactiguard's product portfolio also includes a non-alcoholic product line for wound care and disinfection. It effectively kills microbes while being biocompatible and tissue friendly. Bactiguard is in a strong expansion phase in the markets in Europe, China, India, the Middle East and Southeast Asia through our own product portfolio and by establishing licensing deals in new therapy areas. Bactiguard has about 210 employees around the world. Its headquarters and one of three production facilities are located in Stockholm, the other two in Malaysia. Bactiguard is listed on Nasdaq Stockholm. Read more about Bactiguard www.bactiguard.com

Invitation to presentation of Bactiguard’s interim report on July 14, 2022

Bactiguard Holding AB (publ) publishes the interim report for the second quarter on Thursday July 14, 2022 at 8:00 CET.In connection with this, an audiocast for investors, analysts and media will be held at 11:00 CET on July 14. CEO Anders Göransson and CFO Carin Jakobson will present the interim report and answer questions. The report and a presentation for the audiocast will be available at Bactiguard’s website www.bactiguard.com.  To participate in the webcast, please use this link:https://www.bactiguard.com/Q2-2022 To participate only by conference

Third generation of patents for the Bactiguard technology will be granted

Bactiguard has been informed that the European Patent Office (EPO) intends to grant a European patent for Bactiguard’s infection prevention technology. The new patent, which is the third generation, will provide extensive worldwide protection for the Bactiguard technology until 2039.-          We are very pleased that the EPO has confirmed that the new generation of patents will be granted. This will further strengthen and extend the worldwide protection for the versatile Bactiguard technology and make it even more attractive for existing and new license partners, says Anders Göransson, CEO.

At Bactiguard Holding AB’s (publ) Annual General Meeting (AGM) on 29 April 2022, the following resolutions were made:The AGM adopted the income statements and balance sheets for 2021 and decided that no dividend for the financial year 2021 will be paid. Retained earnings and the company's result for the year will be carried forward. The Board of Directors and CEOs were discharged from liability for their administration of the company for the financial year 2021. The AGM resolved that the remuneration until the next AGM shall be paid in an amount of SEK 750 000 respectively to the

A broader and stronger licensing business strengthens our position in infection preventionFirst quarter (January-March 2022) · Revenues amounted to SEK 55.2 (41.8) million, an increase of 32%, mainly through higher licensing revenues. Adjusted for currency the increase was 23%. · EBITDA amounted to SEK -4.0 (1.9) million with an EBITDA-margin of -7% (5%), a result of initiated investments in accordance with the focused growth strategy. · Operating profit amounted to SEK -16.6 (-9.7) million. · Net loss for the period amounted to SEK -16.5 (-10.5) million. Earnings per share

Bactiguard Holding AB (publ) publishes the interim report for the first quarter of 2022 on Wednesday, April 27, 2022, at 08.00 and holds the Annual General Meeting via postal vote on April 29, 2022.In connection with this, an audiocast for shareholders, investors and analysts will be held at 11:00 CET on April 27. CEO Anders Göransson and CFO Gabriella Björknert Caracciolo will present the interim report and answer questions. The report and a presentation for the audiocast will be available at Bactiguard’s website www.bactiguard.com. To participate in the webcast, please use this link:

Bactiguard today entered an agreement to initiate a global development partnership with Dentsply Sirona in the dental field, a new application area for the Bactiguard technology.The initial development phase, which is expected to last approximately one year, can generate USD 0.9 million in development and milestone related revenues for Bactiguard. Thereafter, the partnership can evolve into a license agreement, with conditional milestone-related payments of USD1.1 million linked to regulatory approvals. In line with Bactiguard's current licensing agreements, the agreement with Dentsply

The annual report for Bactiguard Holding AB (publ) 2021 is now available at www.bactiguard.com.The annual report is available as a downloadable PDF document in both Swedish and English. A printed version of the report will be available from April 29 and can be ordered by sending an email to: info@bactiguard.com. This information is information that Bactiguard Holding AB (publ) is obliged to make public pursuant to the Securities Markets Act. The information was submitted for publication at 10.30 CET on April 8, 2022. For further information, please contact:Gabriella Caracciolo, CFO

The shareholders of Bactiguard Holding AB (publ), company reg. no. 556822-1187 (“Bactiguard”), are hereby given notice to attend the Annual General Meeting (AGM) to be held on Friday, 29 April 2022. Due to the continued uncertainty about the Covid-19 pandemic, the Board of Directors has decided that the AGM will be conducted without physical presence of shareholders, representatives and third parties and that the shareholders are able to exercise their voting rights only by post ahead of the meeting. Information on the resolutions passed at the meeting will be disclosed on 29 April 2022,

Bactiguard Holding AB (publ) has appointed Carin Jakobson, who has many years of experience as CFO of listed companies and a background in the medtech and pharmaceutical industry, as Chief Financial Officer. Carin Jakobson, who is currently CFO of the Rolling Optics Group, will take up her new position at Bactiguard in June 2022 and report to the CEO.“Bactiguard is in an expansive growth phase, and we look forward to welcoming Carin to us. She has extensive experience as CFO in several publicly listed companies with focus on growth in various industries. I am very pleased with the 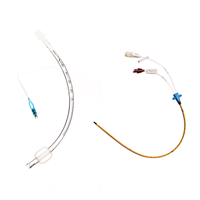 The hospitals in Ukraine are in urgent need of medical devices to manage the health care challenges related to the outbreak of war. Through a network of doctors at the Karolinska University hospital, supported by the Ukrainian Embassy, Bactiguard is providing intensive care products that Ukrainian healthcare has asked for and need.“It is essential that we can provide products that are urgently needed by the Ukrainian hospitals and can make a real difference, says Bactiguard’s Chief Medical Officer and Deputy CEO, Dr Stefan Grass. There are lists of products and equipment that the

In previous press releases regarding the year-end report for 2021, incorrect information related to "Cash flow from operating activities" has been reported. Correction is made with this press release and the correct PDF is attached for Bactiguard Holding AB's (publ) year-end report 2021.Investments for future sales growth impacted profitability Fourth quarter (October-December 2021) · Revenues amounted to SEK 46.1 (55.6) million, a decrease of 17%, primarily due to lower license revenue. Adjusted for currency effects revenues decreased by 22%. · EBITDA amounted to SEK -12.1 (4.9)

Bactiguard presents new long-term financial targets in connection with the year-end report for 2021. The new financial targets relate to growth and profitability, with annual revenues of at least 1 billion SEK and annual EBITDA of at least 400 million SEK in 2026."With Bactiguard's unique technology for infection prevention, scalable business model, broader product portfolio and focused market coverage, our target is to reach annual sales of at least 1 billion SEK, with an EBITDA of at least 400 MSEK in 2026. We will focus on six therapeutic areas and prioritized countries and grow sales

Bactiguard will publish its year-end report for 2021 tonight at 23.00

Following the announcement of the expanded partnership with Zimmer Biomet, Bactiguard has decided to publish the year-end report for 2021 tonight at 23.00 CET, instead of on Thursday February 10, as earlier announced.An audiocasted presentation will take place on Wednesday February 9 at 15.00 CET. Bactiguard's CEO Anders Göransson and CFO Gabriella Björknert Caracciolo will present the year-end report, comment on the expanded global partnership and answer questions. The presentation will be held in English. To participate in the audiocast, please use this link:www.bactiguard.com/Q4-

The VITAL study, by Professor Pierre Damas and his team, is now published in the well renowned journal Annals of Intensive Care. The study shows a 53% reduction of ventilator-associated pneumonia with Bactiguard’s endotracheal tube. It was presented for the first time at the European Society of Intensive Care congress (ESICM) in October 2021.“These are very important data for critically ill patients in need of mechanical ventilation. Ventilator-associated pneumonia (VAP) is an unwanted complication associated with increased hospital length-of-stay, increased costs and increased mortality.

“Gabriella is a key person in the company and she has made an impactful contribution to establishing the platform for our continued expansion. While I regret that she has chosen to leave Bactiguard I respect her decision to return to the financial sector. I want to thank her for her significant contributions to the company and wish her all the best for the future ", says Anders Göransson, CEO of Bactiguard. “My time at Bactiguard has been both exciting and challenging. It has been a privilege to be part of laying the foundation for the company's growth journey and transformation, and I

Anders Göransson, Bactiguard's CEO, has acquired shares in Bactiguard Holding AB (publ) corresponding to an amount of SEK 3 million.The investment comprises a total of 17 620 B shares at a share price of SEK 170,28 which corresponds to the average closing price of the stock exchange during the ten preceding trading days. The transaction was made with the two main shareholders Christian Kinch and Thomas von Koch as counterparties, and was completed after the stock exchange closed on 16 November. ”I am immensely delighted that Anders as the new CEO invests in the company. We encourage the

Invitation to presentation of Bactiguard’s interim report on October 28, 2021

Bactiguard Holding AB (publ) publishes the interim report for the third quarter on Thursday October 28, 2021 at 8:00 CET.In connection with this, an audiocast for investors, analysts and media will be held at 10:00 CET on October 28. CEO Anders Göransson and CFO Gabriella Björknert Caracciolo will present the interim report and answer questions. The report and a presentation for the audiocast will be available at Bactiguard’s website https://www.bactiguard.com. To participate in the audiocast, please use this link: https://tv.streamfabriken.com/bactiguard-q3-2021 To participate only