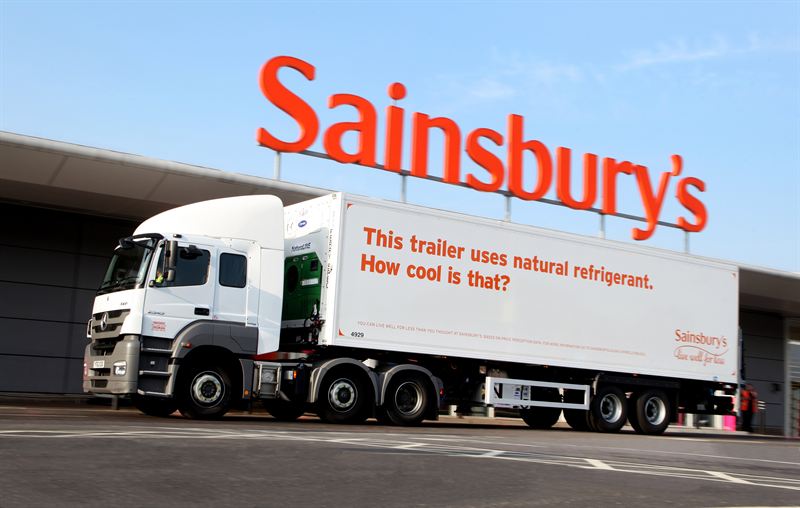 Sainsbury’s is trialling the world’s first naturally refrigerated trailer to transport chilled and frozen goods.  The CO₂ refrigerated unit trial is part of the retailer’s review of its transport refrigeration gas and work to reduce its carbon footprint, which includes converting its stores to natural refrigeration by 2030.

Sainsbury’s was the first UK retailer to commit voluntarily to phasing out harmful HFC refrigerants.  It converted its refrigerated depots in 2011 and is on track to switch 250 stores to CO₂ refrigerant by 2014 – over 160 stores have already moved to the natural refrigeration system.  Currently all new stores are fitted with CO₂ as standard and its Haslucks Green Local store in Solihull is also trialling the very first small-scale CO₂ refrigeration system, making it Britain’s greenest convenience store.

Nick Davies, Sainsbury’s Head of Transport Operations, said: “The new carbon dioxide technology has much less of an impact on climate change and we hope it will play a big part in helping us reduce our carbon emissions.  We will be monitoring its performance closely and if successful, in line with our replacement plan, it could help us save over 70,000 tonnes of CO₂ compared to the current refrigerated trailer fleet.”

Sainsbury’s is working with Carrier Transicold in a two year trial of the new HFC-free cooling technology for road transport, using a modified version of Carrier’s NaturaLINE™ refrigeration system, which was initially developed for deep sea containers and completed a rigorous sea trial programme in 2012.

David Appel, President of Carrier Transicold, said: “This is the very first time that our NaturaLINE system has been mounted to a box trailer anywhere in the world.  It’s a fantastic opportunity to advance Carrier's natural leadership in environmental technologies, by working closely with Sainsbury’s, one of our largest customers in Europe, to test how the concept performs on the road.  It’s also much better news for the environment because natural refrigerant CO₂ is non-ozone depleting and has a Global Warming Potential of one.”

Sainsbury’s has also recently extended its Dual-Fuel fleet to 51 vehicles saving up to 25 per cent in carbon emissions (over 2,090 tonnes of CO₂).  The environmentally friendly fleet, now one of the largest in the UK, operates on a combination of diesel and bio-methane, produced from rotting organic material in landfill.  Each Dual-Fuel vehicle will save around 41 tonnes of CO₂ from being dispersed into the atmosphere each year.

Underpinned by its 20x20 Sustainability Plan, Sainsbury’s aims to reduce its depot to store transport CO₂ emissions by 35 per cent by 2020 and achieve an absolute reduction of 50 per cent by 2030, against a 2005 baseline, despite the growth of its business.

This industry-leading plan is the cornerstone of Sainsbury's business strategy and sets out 20 environmental and socially responsible targets to be achieved by 2020.  It aims to ensure Sainsbury’s remains at the forefront of sustainability to 2020 and beyond.

Carrier Transicold helps improve transport and shipping temperature control with a complete line of equipment and services for refrigerated transport and cold chain visibility. For more than 40 years, Carrier Transicold has been an industry leader, providing customers around the world with the most advanced, energy efficient and environmentally sustainable container refrigeration systems and generator sets, direct-drive and diesel truck units and trailer refrigeration systems.

Carrier Transicold is a part of UTC Climate, Controls & Security, a unit of United Technologies Corp., a leading provider to the aerospace and building systems industries worldwide. Visit www.transicold.carrier.com for more information.

Carrier Transicold unveiled the design of its NaturaLINE system in 2011, as the world’s first and only natural refrigerant-based container refrigeration system, one year after announcing the technology’s development. It is one of Carrier’s most exciting developments of recent years and encompasses multiple innovations that work together, enabling the use of a natural refrigerant in a design capable of achieving industry-leading efficiency.

For this trial with Sainsbury’s – the only one of its type in the world – a modified version of the NaturaLINE unit has been mounted to a 10.8m Gray & Adams urban distribution trailer which is operating from Sainsbury’s Elstree depot and serving stores across Greater London.

The natural refrigerant CO₂, also known as R-744, is non-ozone depleting. Its Global Warming Potential (GWP) of one compares very favourably to conventional refrigerants R-134a and R-404A, which have GWPs of 1,300 and 3,260, respectively. The GWP of CO₂ is lower than other natural refrigerants, such as propane and ammonia, so even in the event of a leak, the use of CO₂ adds no new environmental risk.