Nasal spray could deliver a future mRNA vaccine against COVID-19

In the the global struggle against the coronavirus, scientists in a new pilot project led by Chalmers University of Technology, Sweden, have started a project to explore design principles for nasal immunization. If successful it might be useful in future vaccine developments versus viral infections including SARS-CoV-2. Through a broad collaboration between universities and external partners, the researchers are trying to find a new way to tackle both SARS-CoV-2 and other viruses that attack our cells.

“There are several benefits to administering a vaccine directly into the nasal mucosa. It mimics how many viruses often enter the body and can therefore more effectively trigger the immune defence at the point of entry,” says researcher Karin Norling at the Department of Biology and Biological Engineering at Chalmers University of Technology.

Karin Norling recently defended her PhD thesis in bioscience and is now in the process of coordinating and preparing the laboratory work for the new pilot project.

By combining several promising concepts developed at Chalmers University of Technology and the University of Gothenburg, AstraZeneca and internationally, the researchers hope to be able to test a unique vaccination concept against COVID-19.

The researchers aim to design a biomimetic nanoparticle that deceives the body's immune cells to act as if they had encountered a true virus. In fact, they encounter something known as an mRNA, which is a precursor to a harmless element of the virus. In addition, the artificial particle has been provided with both immune enhancers and a targeting protein – a ‘label’, which acts almost as a set of directions, allowing the vaccine to reach only a certain type of immune cell. When activated, the body will hopefully learn to recognise and defend itself against the virus in the future.

"We hope that this multidisciplinary approach will inform how future vaccine platforms for nasal mRNA delivery can be designed," says Fredrik Höök, Professor at the Department of Physics at Chalmers and Project Coordinator of the centre Formulaex, where AstraZeneca is the leading industrial partner.

During the pilot project, the researchers will evaluate the prerequisites for a longer and more extensive project to develop a COVID-19 vaccine in nasal spray form.

“It will take years to develop a vaccine but hopefully after this project we will be able to say whether the concept of a targeted nasal spray vaccine is promising enough to warrant further work.,” says Karin Norling.

When the scientific journal Nature recently described different types of vaccine concepts being tested, mRNA technology was included in the list.

More on the interdisciplinary pilot project

The new research collaboration also involves Elin Esbjörner Winters and Pernilla Wittung Stafshede from Chalmers, Nils Lycke from the Sahlgrenska Academy, the University of Gothenburg and Lennart Lindfors from AstraZeneca.

The project is funded by the Chalmers Innovation Office, Chalmers Area of Advance Health Engineering, The Swedish Foundation for Strategic Research, SSF, and the Swedish Research Council (VR). The project is partly performed within the framework of the SSF-funded Formulaex research center.

Fredrik Höök is also a Profile Leader of Chalmers’ new Area of Advance within Health Engineering, which addresses societal challenges by providing innovative technologies and solutions to the medical and health area in collaboration with regional, national and international partners. 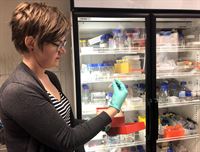