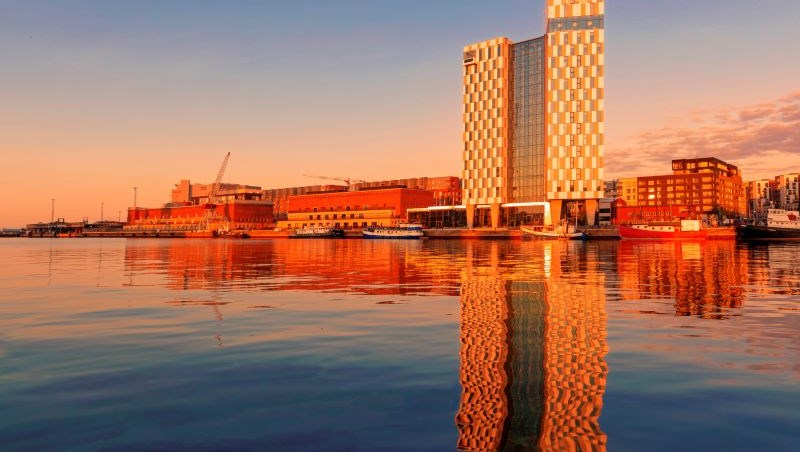 HELSINKI, FINLAND: An international jury has selected four winners from the ten finalists in the Helsinki Energy Challenge. The four winning teams were announced during a virtual event introduced by the Mayor of Helsinki, Jan Vapaavuori, and will each take a share of the €1 million prize fund.

The four winning proposals are:

HIVE, a flexible plan, based on proven technologies and solutions, such as seawater heat pumps, electrical boilers, solar thermal fields and demand side management measures; the plan is capable of integrating new technologies if and when these emerge.

Helsinki’s Hot Heart, a system made of 10 floating reservoirs filled with 10 million cubic metres of hot seawater that can receive different energy sources as input. Four of the cylindrical tanks that make up Helsinki’s Hot Heart would be enclosed with inflatable roof structures to create a new leisure attraction.

Beyond Fossils, an energy transition model based on open and technology neutral clean heating auctions, paving up the path to carbon neutral Helsinki in a flexible and innovation enabling way.

“Cities must take the energy revolution into their own hands if we are to meet the accelerating challenge presented by climate change. While many cities have the raw ingredients for energy transition, the scale of the challenge requires leaders within city governments to create a policy environment that rejects the status quo and actively stimulates innovation and synthesis.

“The Helsinki Energy Challenge is one output of a City-wide mission to reduce our carbon footprint. Throughout my mayoralty we have operated under the policy that every action is a climate action. I’m proud that in Helsinki we are leading a search for new solutions that have global potential.”

252 Entrants from more 35 countries submitted outline proposals in the first stage of the year-long Helsinki Energy Challenge. 10 Finalists in the challenge were notified on 6 November 2020 receiving €10,000 each to continue elaborating their solution in greater detail in partnership with the City of Helsinki. Final submissions were made on 22 January and underwent intensive evaluation by an international panel of experts, who included Hans Jørgen Koch, Nordic Energy Research; Markku Ollikainen, University of Helsinki & Chair of the Finnish Climate Change Panel; Robert Stoner, MIT Energy Initiative and MIT Tata Center for Technology and Design; Sanna Syri, Aalto University; Brian Vad Mathiesen, University of Aalborg and Martin YoungWorld Energy Council.

While this ceremony marks the end of the competition, it is just the start of building Helsinki’s future heating system to meet the city’s ambitious goal to be carbon neutral by 2035. The City now a wide range of solutions and learnings for future energy decisions

Helsinki is one of the leading cities in the transition towards a sustainable future, but its urban heating leaves a huge carbon footprint. Currently, more than half of Helsinki’s heat is produced with coal, a fuel source which will be outlawed in Finland from 2029. In order to achieve carbon-neutrality, Helsinki needs radically new solutions to meet demand for heating homes in the famously variable Nordic climate. Helsinki is not alone: to fight climate change, sustainable heating solutions are needed in cities all over the world - Heating not just beyond coal, but also beyond burning biomass.

“Through the Helsinki Energy Challenge, we have been led to new ways of thinking and approaches which would not necessarily have arisen without this competition. During the one-year-long process, it became clear that there was a need for our exceptional approach. Energy revolution and climate change mitigation require non-traditional means of finding solutions.

“As a result of our work with some of the leading innovators in urban heating from across the globe, we now have a very wide range of solutions in our hands, which we can utilise in our decisions in the future. The clearest winner of the Challenge is Helsinki itself. We have learned tremendously during the process and we will be sharing these lessons with all cities.”

The four winning teams presented proposals that represented a broad range of solutions, from major infrastructure such as floating heat storage islands, to market reform that will encourage innovation and aims to open the heating network for several heat producers

Full details of all 10 Finalists are available in the attached document.

Images and diagrams of the finalist proposals can be found in this link: www.dropbox.com/sh/mqftg6udfvocvja/AADDf49B-FrukiWUS0XyK2Qea?dl=0

About the Helsinki Energy Challenge:

The climate crisis is the most crucial challenge of our time, and cities have a key role in driving the shift to a low-carbon economy. Helsinki is one of the leading cities in the transition towards a sustainable future, with the goal of becoming carbon-neutral by 2035. But there is an issue to overcome. Currently, more than half of the city’s heat is produced with coal.

In order to achieve carbon-neutrality, we need radically new solutions to meet Helsinki’s heat demand. And we are not alone. To fight climate change, sustainable heating solutions are needed in cities all over the world. Heating not just beyond coal, but also beyond burning biomass.

That is why we launched the Helsinki Energy Challenge. A global one-million-euro challenge competition to answer the question: How can we decarbonise the heating of Helsinki, using as little biomass as possible?

The Helsinki Energy Challenge was a year-long process. The competition was kicked off on 27 February 2020 and it inspired 252 teams from 35 countries from around the world to participate. Ten finalist teams were selected in November 2020 and invited to join the co-creation phase of the competition.

During co-creation phase, which included a 3-day intensive virtual boot camp, the teams received support and additional information to be able to develop their solutions further. The finalist teams submitted their final proposals in January 2021 and in February, the international jury evaluated the proposals and made their decisions.

The competition showed that the heating system of the future is made up of several partial solutions and actors, which have been optimised to work together. A system of this kind challenges the traditional modus operandi. In the future model, there are many actors and the integration of interests requires deliberation of the thoughts and operating models.

The competition made it clear that the heating challenge is not solely a technological challenge. That is why part of the proposals took on the challenge by means of business models and other operating models, while trying to tackle the question of how the heating market should function in order for it to be the best possible for both the climate and the consumer.

“The decisions concerning energy production have long-term consequences and the investments are considerable. As a result of the energy revolution, the whole ecosystem for energy production will change and in our current decisions, we must acknowledge the effects on different actors and enable a heating system that is optimal for the future. The cities must challenge themselves – how can the city, through its operations and decisions, help the transition towards the heating system of the future? It is now important to ensure that we aim for a heating system, which does not exclude future technologies, but quite on the contrary, enables innovation. A successful execution of this multi-actor model requires a clear vision. Helsinki must make decisions that we can be proud of not only today, but in 50 years' time as well. And the debate is not focused only on district heating companies, but on many other actors as well. The discussions concerning the next steps and the utilisation of the takeaways from the Helsinki Energy Challenge have already started”, says Mayor Vapaavuori.