A daring white-tailed eagle couple decided to establish their nest in the middle of Finland’s capital this spring. Now there are three chicks peeking out of said nest. Persistent conservation measures have made Helsinki one of the bird capitals of Europe. 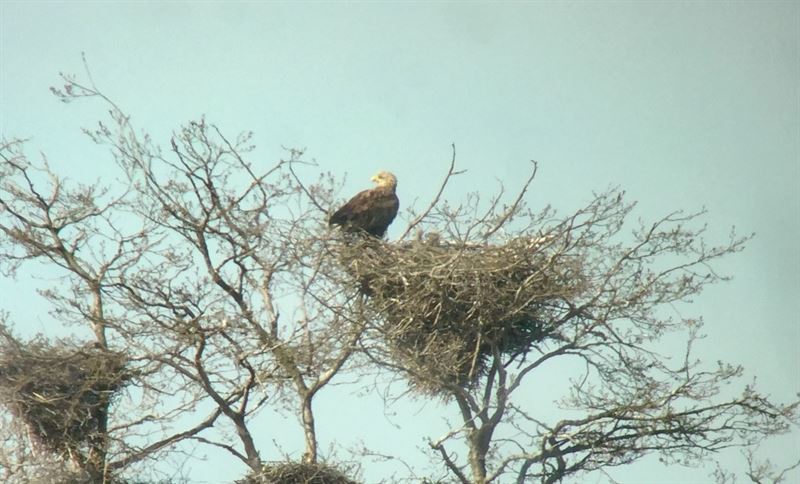 White-tailed eagles nesting in the middle of Helsinki is a unique occurrence, as there are no records of the species ever nesting in such an urban environment in neither Finland nor the rest of Europe. White-tailed eagles are timid and typically nest further away from settlements. The species was on the brink of extinction just a few decades ago, which is why it is so astonishing that the eagles would choose to nest in the Vanhankaupunginlahti nature reserve, located just five kilometres away from Helsinki city centre as the eagle flies.The white-tailed eagle couple, Nadi and Amalia, have built their nest in an old grey heron nest on the island of Loppi. Said small island is also home to grey herons and great cormorants, which seem determined to nest right next to the white-tailed eagles. The white-tailed eagles have proven to be dangerous neighbours, however, having already devoured a number of the other birds’ eggs.

The eagles have three chicks, which they feed primarily with bream and other fish caught from the surrounding waters. The couple were, rather fittingly, named after a fisher couple who lived in the area in the 19th century. The eagles have more mouths to feed than usual, as white-tailed eagles only rarely have triplets.

Helsinki to become the bird capital of Europe?

The City of Helsinki has worked persistently to promote the diversity of the city’s flora and fauna. There are approximately 150 bird species that annually nest in Helsinki, accounting for two thirds of all the bird species that nest in Finland. As regards birds of prey, in addition to the white-tailed eagle, Helsinki has recently also become home to the northern goshawk, which has similarly typically avoided human settlements. As a result of the species’ rapid population growth, Helsinki now boasts the densest northern goshawk population in all of Finland.

The presence of so many different species is explained by Helsinki’s diverse habitats, which include the archipelago, forests, fields and wetlands. When it comes to the number of nesting bird species, Helsinki has a number of European capital cities beat, including Berlin, London, Moscow and Stockholm, even though all of these, except for Stockholm, cover a larger area than Helsinki. One European capital city that is a match for Helsinki in this regard is Tallinn.

“Helsinki is a growing city that is constantly building new housing. It is an important goal for us to ensure that the city grows without compromising its extensive natural areas and biodiversity. For me, the Vanhankaupunginlahti area is an important place for recreation and enjoying nature, as it is for countless other residents of Helsinki. During the ongoing coronavirus crisis, the area has become a record-breakingly popular hiking destination,” says Deputy Mayor of the City of Helsinki Anni Sinnemäki.

The Vanhankaupunginlahti nature reserve is Helsinki’s most notable wetland and an internationally important bird area, which has been used as a nesting ground by 125 different bird species in the 21st century. Despite its location near Helsinki city centre, Vanhankaupunginlahti provides a sheltered nesting place for birds.

From an endangered species to the king of the city

The white-tailed eagle is Finland’s largest bird of prey, with a wingspan of up to 2.5 metres. The fact that the species has settled in the middle of Helsinki is the result of persistent conservation efforts. Only a few decades ago, the species was extremely endangered in Finland, with its survival threatened by environmental toxins and persecution. In the 1970s, the white-tailed eagle was on the brink of extinction: there were only approximately 35 nesting pairs in Finland, which had been rendered nearly infertile due to environmental toxins. In 1975, the number of white-tailed eagle chicks hatched in Finland was only four. However, with the help of a widespread winter feeding operation through which eagles were provided with uncontaminated food starting from the 1970s, Finland’s white-tailed eagle population has since been successfully revitalised.

Helsinki is the capital of Finland with a population of 648 042. The Helsinki metropolitan area is home to 1.2 million people. Helsinki is a well-functioning and unique seaside city with a strong emphasis on sustainability, tech, design and nature. www.hel.fi