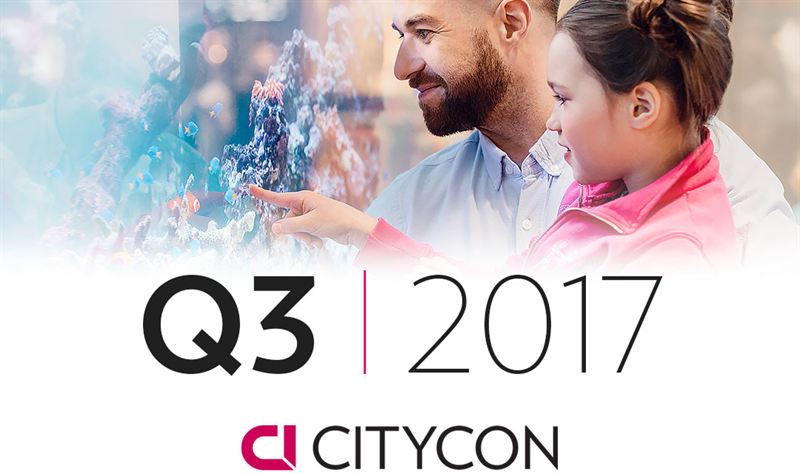 1) Change from previous year. Change-% is calculated from exact figures.
2) Citycon presents alternative performance measures according to the European Securities and Markets Authority (ESMA) guidelines.
More information is presented in Basis of Preparation and Accounting Policies in the notes to the accounts.

CEO MARCEL KOKKEEL:
The first three quarters of 2017 have shown good operational results driven by strong Sweden and solid Norway. The overall performance in Finland has turned to a more positive direction, although Finnish like-for-like performance is still negative due to the stronger Finnish centres having recently been under (re)development. Citycon’s like-for-like net rental income growth including Kista Galleria (50%) totalled 1.1%.

During the first nine months, we divested assets for approximately EUR 140 million in total. Additionally, we signed an agreement to divest a sizeable portfolio of non-core properties in Finland for approximately EUR 167 million. This transaction is expected to be closed mid-November and the proceeds from this divestment will be used to fund the development pipeline as well as to strengthen our balance sheet.

In August, we signed a letter of intent with Klövern for (re)development and extension of the current shopping centre Globen in the upcoming Meatpacking District in Stockholm, just south of CBD. The plan is to double the size of the current 20,000 sq.m. shopping centre and substantially improve the shopping centre quality. The timeline for the completion is 2022-2023 and Citycon’s ownership of the joint venture company will be 55%. This partnership is in line with our strategy to strengthen Citycon’s position in Stockholm’s dynamic urban areas with high population growth.

In September, we successfully issued a NOK 1,000 million bond, with a maturity of eight years and a fixed annual interest rate of 2.75%. The net proceeds have been used for refinancing of existing indebtedness and general corporate purposes.

BUSINESS ENVIRONMENT
In Finland, consumer confidence has reached its long-term average for the first time in five years and also the Finnish economy grew last year at its fastest pace in five years. Construction and consumption remain the main factors for growth; however, growth in consumption comes at a time when wage levels have not increased. Exports have experienced a clear positive turn this year. This is due to better international economic conditions and good demand from key export markets like Sweden and Germany. Russia’s recession is over but sanctions still have an impact on the exports. Unemployment is expected to continue to decrease due to the above-mentioned reasons. Retail real estate investment demand continued to be high during the first three quarters of the year, however, transaction volume decreased due to limited supply. This has also resulted in increased yield gap between prime and secondary assets.

The Norwegian economy is expected to continue to grow, mainly due to consumption, housing investment and strong export growth. Employment market is expected to improve and inflation is stabilising after the peak last summer caused by weakening exchange rate, which increased the prices of imported goods. Retail sales have increased during the last quarter and shopping centre rents have remained stable over the last twelve months. The Norwegian commercial real estate investment volume was the second highest of all time in 2016 and the trend has continued during the first nine months of 2017.

The Swedish economy continues to display positive signs of growth driven by strong macro fundamentals, strong domestic demand and exports. The growth of domestic demand is expected to be relatively steady in 2017, but exports are benefiting from the weak Swedish krona and international economic strength. In the real estate market, strong investment demand for retail properties and low supply assisted by low interest rates has compressed prime shopping centre yields during the past year. Additionally, retail rents for prime shopping centres have increased by 2-4% over the past year assisted by strong retail turnover growth.

Denmark and Estonia are expected to have positive GDP growth due to private consumption and gradually increasing investment activity. In Estonia, continuous growth of retail sales has been positively influencing the commercial real estate market. However, in Tallinn the increased competition is expected to put pressure on profits of retailers and additionally cause vacancies to shopping centres with secondary locations. In Denmark, prime shopping centre rents, vacancy rates and investment demand have been quite stable for a few years and are expected to remain at previous levels in the best performing shopping centres.

RISKS AND UNCERTAINTIES
The most significant near-term risks and uncertainties in Citycon's business operations are associated with the general development of the economy and consumer confidence in the Nordic countries and Estonia as well as how this affects the fair values, occupancy rates and rental levels of the shopping centres and thereby Citycon’s financial result. Increased competition locally or from e-commerce might affect demand for retail premises, which could lead to lower rental levels or increased vacancy, especially outside capital city regions.

The main risks that can materially affect Citycon's business and financial results, along with the main risk management actions, are presented in detail in Note 3.5 A) and on pages 73-74 in the Financial Statements 2016 as well as on Citycon’s website in the Corporate Governance section. No material changes are estimated to have taken place during the first three quarters in the risks described.

DIVIDEND AND EQUITY REPAYMENT
Citycon’s dividends and equity repayments in 2017:

1) Board decision based on the authorisation issued by the AGM 2017
2) The AGM 2017 authorised the Board of Directors to decide in its discretion on the distribution of dividend and assets from the invested unrestricted equity fund. Based on the authorisation the maximum amount of dividend to be distributed shall not exceed EUR 0.01 per share and the maximum amount of equity repayment distributed from the invested unrestricted equity fund shall not exceed EUR 0.12 per share. Unless the Board of Directors decides otherwise for a justified reason, the authorisation will be used to distribute dividend and/or equity repayment four times during the period of validity of the authorisation. In this case, the Board of Directors will make separate resolutions on each distribution of the dividend and/or equity repayment so that the preliminary record and payment dates will be as stated above. Citycon shall make separate announcements of such Board resolutions.

These estimates are based on the existing property portfolio and already committed divestments, which are expected to be closed by the end of 2017, as well as on the prevailing level of inflation, the EUR–SEK and EUR–NOK exchange rates, and current interest rates. Premises taken offline for planned or ongoing (re)development projects reduce net rental income during the year.

FINANCIAL CALENDAR
Citycon Oyj’s schedule of the financial reporting in 2018 is the following:


Citycon Oyj
Board of Directors

Citycon is a leading owner, manager and developer of urban, grocery-anchored shopping centres in the Nordic and Baltic region, managing assets that total almost EUR 5 billion and with market capitalisation of close to EUR 2 billion. Citycon is No. 1 shopping centre owner in Finland and among the market leaders in Norway, Sweden and Estonia. Citycon has also established a foothold in Denmark.