Launched in 2016, the awards recognise and celebrate the standout restaurant and pub operators of the year across the growing multi-billion pound casual dining sector.  Due to unanimously positive feedback, and a long waiting list of attendees and sponsors, these important awards are moving to a new, bigger venue – Marriot London Grosvenor Square – for 2017.

“We were delighted with the response to the first Casual Dining Restaurant & Pub Awards.  It really was a highlight of the year for many operators and their teams who deserve to be recognised and celebrated.  I’m pleased to announce that following feedback from our judging panel of industry leaders, the second annual awards will be even bigger, better and a great way to celebrate with clients and colleagues.  Thanks to all the judges and sponsors for their support,” says Chris Brazier, group event director, Casual Dining.

The 2017 judging panel features some of the biggest names in the sector, including Karen Forrester, CEO of TGI Friday’s UK; Jane Holbrook, COO at wagamama; Mark Fox, CEO of Bills; Keith Bird, COO at GBK; Garry Duncan, operations director at Nandos; and Kate Nicholls, chief executive of The Association of Licensed Multiple Retailers.

"The inaugural awards helped to foster a sense of community and identify outstanding achievement,” says returning judge Ian Neill.  “I think we have something special to look forward to with the 2017 Casual Dining Restaurant & Pub Awards."

Multiple and independent casual dining restaurants, pubs and bars are encouraged to submit their entries online at www.cdawards.co.uk.  Submissions are already flooding in and the final deadline for entries is Friday 25 November 2016.

There are 15 categories in all, including three new awards – for community engagement, sustainability and environmental practices, and menu innovation.  Confirmed sponsors already include Reynolds, Lamb Weston, Budvar, Chef Direct, Bar Foods and McCain, with more to be announced shortly.  The evening starts with the ‘Trailblazer of the Year’ Award, which has been nominated by the judges.

The 2017 award categories are:

The full list of 2017 judges includes (in alphabetical order):

The awards ceremony will take place on the evening of 22 February 2017 at the London Marriott Hotel, in Grosvenor Square, following the first day of the Casual Dining trade show.

For further information, to enter or to book tables please visit www.cdawards.co.uk.

Save the date for Casual Dining 2017

Casual Dining – the UK’s only dedicated trade event for casual dining operators (including multiple and independent pubs, bars and restaurants), has opened its visitor registration for 2017.

The multi-award winning event returns to the Business Design Centre in London on 22-23 February 2017.

“The Casual Dining show is the two days a year when our sector gets together.  It’s an essential forum for sharing new ideas, innovations and insights,” says Simon Kossoff, co-founder of Carluccio’s.

“Casual Dining show is great for catching up with my key suppliers, all under one roof, coupled with some great newcomers with challenging ideas and innovation – what’s not to like,” says Mark Rush, head of food innovation at Revolution Bars Group.

For more information, and to stay up-to-date with all the latest news and exhibitor information, please visit www.casualdiningshow.co.uk.

Casual Dining was the first launch show (UK and international) in over five years to win ‘Best Tradeshow Exhibition under 2,000sq.m’ at the Association of Event Organisers’ Excellence Awards 2014.  In 2015, it won the same award for the second consecutive year (it was also named a finalist in 2016). 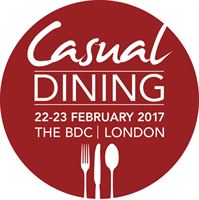