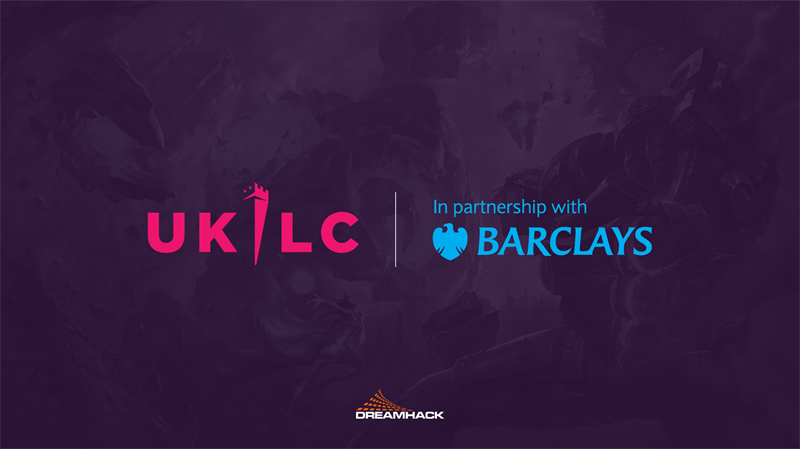 Full Details of Next Season of UKLC Available Now

STOCKHOLM — DreamHack, the premier gaming lifestyle festival, has today announced the 2020 Summer Split of the UK League of Legends Championship (UKLC), along with a partnership agreement which sees Barclays as the lead sponsor for the professional esports tournament.

The next season of the UKLC is set to start on June 14, 2020, and will feature eight teams from the UK and Ireland. The UKLC will run over an eight week period in June, July, and August. The eight teams will compete in a double best-of-1 round-robin format, with the top four teams advancing to the playoffs. There will be £20,000 awarded to the teams and players for participation in the UKLC.  Additionally, the top two teams of the UKLC will be able to compete to advance to the NLC, in a structure mirroring professional football.

"The UKLC is a key part of the new Northern European League of Legends Ecosystem we are developing," said Michael Van Driel, Chief Product Officer at DreamHack. "We are extremely excited to bring on Barclays as a key partner alongside the participating teams to continue to innovate and create a competitive ecosystem in which all fans, teams, organizers, and partners can work together for mutual benefit."

Steven Norris, Head of Brand Partnerships at DreamHack: “It's clear that Barclays truly understands the power and potential of esports. As the presenting partner and headline sponsor for the UKLC, they're blazing the trail for more British brands to become part of the esports ecosystem.”

Ben Davey, CEO of Barclays Ventures, added: “We are so excited to be partnering with Dreamhack to present the UKLC, the pinnacle of UK league of legends, showcasing and nurturing the top UK esports talent. With our heritage of supporting sport and seeing the powerit has to bring people together, the UKLC partnership was an obvious first step for Barclays into professional esports. We’re really looking forward to learning from the community how we cansupport teams, players, and fans to thrive and grow.”

The UKLC will feature six invited teams; Enclave, Demise, NVision, Barrage Academy, MnM Academy, and Munster Rugby Gaming Academy. Alongside this, two teams will advance through a qualification process. DreamHack will select teams from existing community-based League of Legends competitions alongside a fully open, ‘anyone can participate’ qualifier to find the final two teams.

Additional details, such as a full schedule, qualifier information, and team lists, can be found at dreamhack.com/uklc.

Barclays is a British universal bank. We are diversified by business, by different types ofcustomer and client, and geography. Our businesses include consumer banking and paymentsoperations around the world, as well as a top-tier, full service, global corporate and investmentbank, all of which are supported by our service company which provides technology, operationsand functional services across the Group.