The eCentre has been deployed in East Perth, Western Australia and is now fully operational.  Known as the “P2 microsite”, it forms a part of the new 20MW P2 Perth data centre project that NEXTDC is building over the next 18 months.

Acting as a standalone facility for interconnection and telecommunications, the P2 microsite will provide Western Australia-based businesses with immediate connectivity to critical cloud services, metro, national and international links, in advance of the the completion of NEXTDC’s hyperscale P2 facility in 2020.  At that point the microsite will be seamlessly absorbed, becoming an integral part of P2’s interconnect infrastructure.

“Deploying rapid access connectivity hubs is an exciting new approach to planning and building our hyperscale data centres,” said Simon Cooper, Chief Operating Officer at NEXTDC. “We have a passion for innovation and Flexenclosure shares the same values, making their eCentre an ideal solution for our P2 microsite and our WA customers who will now benefit from the immediate connectivity it will deliver.”

The result is a world class micro data centre that has provided NEXTDC with the critical infrastructure required to deliver next generation services to its customers today and a seamless transition to the new P2 data centre in 2020.

For additional information on this project, please see the Flexenclosure and NEXTDC case study.

“The key to winning this order from NEXTDC was our ability to provide a proven world class facility, extremely fast,” said David King, CEO, Flexenclosure. “However, eCentre is not simply the solution of choice for facilities where rapid deployment is critical.  Our ability to take end-to-end responsibility for a data centre’s design, manufacture, deployment and final commissioning allows our customers to focus on their core business without being distracted by infrastructure projects.” 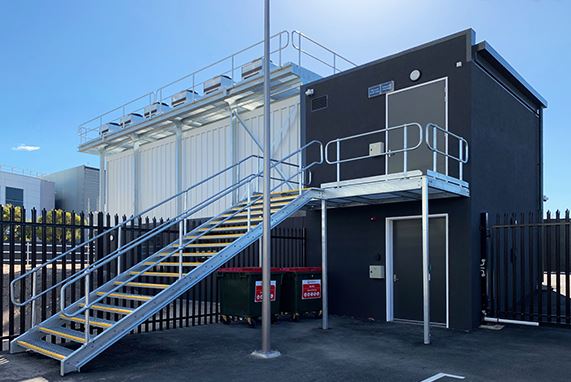 Flexenclosure designs and delivers award-winning, prefabricated modular data centres for colocation, cloud and communications companies. eCentres are custom-designed, fast to deploy and energy efficient data centres and can be deployed as hyperscale, regional core, edge or micro edge facilities.  Flexenclosure is headquartered in Sweden and has additional offices around the globe. With deployments across six continents, eCentre customers include Airtel, CenturyLink, Globe Telecom, Millicom, MTN, NEXTDC and Vodacom.  Find out more at Flexenclosure.com, LinkedIn, Facebook and Twitter.