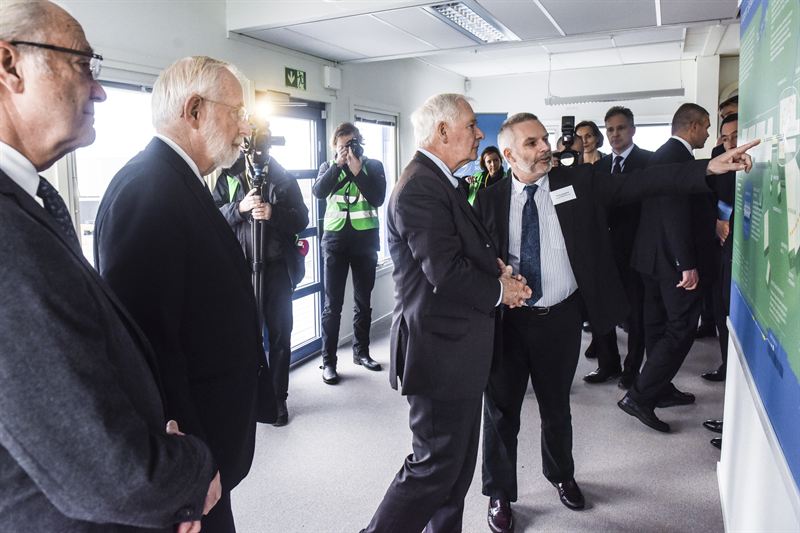 Today, His Majesty King Carl XVI Gustaf of the Kingdom of Sweden and His Excellency the Right Honourable David Johnston,  Governor General of Canada, visited European Spallation Source (ESS) in Lund, as part of a four-day state visit to Sweden. During the visit, future collaboration possibilities between Canada and Sweden were discussed. The Swedish Minister for Higher Education and Research, Helene Hellmark Knutsson, and the Canadian Minister of Science, Kirsty Duncan, also participated in the visit to ESS.

Today's visit was also the King's first to the ESS construction site in northeast Lund. From the site office's viewing deck, the King, the Governor General and the Swedish and Canadian delegates could get an overview of the construction site, where the world leading materials research facility is beginning to take shape. The facility's unprecedented capabilities within neutron scattering will enable unique research possibilities and contribute to future big discoveries in for example life science, transport, alimentation and energy. Canada's Governor General was pleased to see the site and talked about how Canada and Sweden can further enhance their collaboration in innovation:

“I was delighted to visit the construction site of the European Spallation Source and to learn more about this impressive facility,” the Governor General said. “The complexity of this important research project means we have much to gain from working together. I look forward to the results of continued collaboration between Canadian and Swedish innovators and researchers.”

The large delegations from Canada and Sweden attending the ESS visit included representatives of the Canadian and Swedish governments, industry and academia.

"Canada is an important collaboration partner for Sweden and we hope through this state visit to increase our collaboration within research and innovation," said Helene Hellmark Knutsson, Swedish Minister for Higher Education and Research. "As host country for ESS, Sweden welcomes international partners in this global research infrastructure project."

During the visit possible research collaborations between Canada and Sweden were discussed at a round table, where the significance of research facilities such as ESS and the neighbouring synchrotron facility MAX IV for research in areas such as life science, clean tech and information and communications technology was highlighted. Arthur B. McDonald, Professor Emeritus at Queen’s University and 2015 Physics Nobel Laureate, was one of the Canadian delegates who took part in the discussion, as did Lena Ek, Swedish Government's Special Envoy for ESS. Canada's and Sweden's overlapping research priorities, strong support for R&D and legacy of innovation were particularly noted at the round table.

“Both Sweden and Canada recognise the importance of sustained investment in the research infrastructures that are needed if we are to make progress on the key cross-cutting challenges of the 21st century, such as energy, materials, and healthcare," said John Womersley, ESS Director General, who led the round table discussion. "ESS is an excellent example of such an investment and we hope that it can help to foster a deeper collaborative relationship between Swedish and Canadian scientists in the coming decade.”

In connection to the visit to ESS, a Memorandum of Understanding for cooperation between the two synchrotron facilities MAXIV and Canadian Light Source was also signed.

European Spallation Source (ESS) is a multi-disciplinary research facility based on the world's most powerful neutron source. ESS is expected to deliver the first neutrons by the end of the decade, with the user program to follow in 2023.

European Spallation Source, ESS, is a multi-disciplinary research infrastructure based on the world’s most powerful neutron source. The main facility is under construction in Lund, Sweden, with a Data Management and Software Centre in Copenhagen, Denmark. Construction started in 2014 and the user programme for researchers will begin in 2023. The European Spallation Source ERIC (European Research Infrastructure Consortium) currently has 13 member countries.