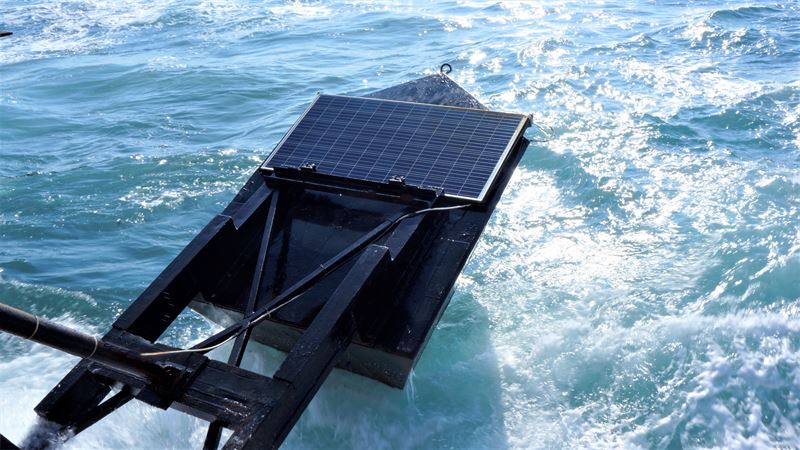 This week, EWP applied for a new PCT (international patent) and a new Israeli Patent for an integrated wave and solar system and commenced initial testing for the combined solution.

The idea for the combined solution was conceived from significant interest of several of EWP’s potential clients in having a variety of renewable energy sources as part of their energy mix.

However, due to space restrictions (especially experienced by islands), there is a limitation on the implementation of large-scale solar farms which often require significant land spaces.

In order to ease the integration of the sources, without waste of any land space (which often also comprises a significant part of the cost in commercial scale solar farms), EWP developed a method for connection of the solar panels to the surface of its’ floaters.

As a result, on the same space, there would occur generation from both renewable energy sources; wave energy and solar power.

The EWP engineering team explained that the possible advantages in such combination are:

1. Higher generation of electricity on the same space (wave and solar)

2. No costs associated with land use for solar production.

3. During sunny days, when the water is still there will be a mirroring effect which will potentially increase energy production from the solar panels on top of the EWP floaters

4. In addition, the surrounding water will have a cooling effect on the panels causing less energy loss resulting from heat, in similarity to solar panels that are currently being installed on water reservoirs.

The company started testing of the combined system in its R&D facility in the Port of Jaffa. Upon successful test results, the company will install the solar panels on all floaters in the expanded EWP station in Jaffa port and will review the possibility to install the new system also in Gibraltar and in future sites.

The integration of solar as an additional source will raise the price of EWP’s power station by only up to 3 percent, as it will connect to the same conversion and control systems which are already used for the wave energy generation, whereas the installed capacity of the plant is expected to grow up to as much as 10 percent, which will potentially create faster ROI for the EWP projects.​

About Eco Wave Power
Eco Wave Power is a Swedish company, founded in Tel Aviv, Israel, in 2011, which developed a patented, smart and cost-efficient technology for turning ocean and sea waves into green electricity. Eco Wave Power is the only wave energy company in the world, to own and operate an array of floaters that produce energy from waves and is connected to the grid in accordance with a Power Purchase Agreement, PPA. EWPG Holding AB (publ) (ticker EWP) is listed on Nasdaq First North Growth Market in Stockholm.