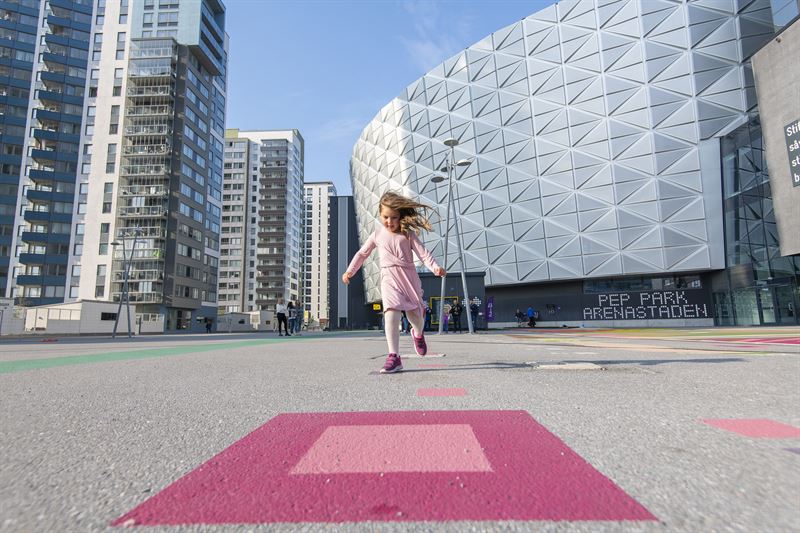 Arenastaden has gained a playful and colourful addition in the form of a new Pep Park. At Arenatorget, a stone’s throw from both Friends Arena and Westfield Mall of Scandinavia, Fabege together with Generation Pep and the City of Solna has built the new park, which will inspire children and young people to be more active.

“For us, it is important that there is life between the buildings in the districts where we work. Every year, Arenastaden receives millions of visitors, and if we can encourage some of them to be a little more active in their everyday life then we have achieved a large part of our goal with the park,” says Stefan Dahlbo, CEO of Fabege.

The Pep Parks in Solna are a collaboration between Fabege, the City of Solna and Generation Pep – an organisation created on the initiative of the Swedish Crown Princess. The concept aims to promote the health of children and young people and improve the opportunities for play, movement and daily exercise together. The parks will contain elements adapted to all ages, will be accessible to everyone and will encourage both spontaneous and planned activity. The Pep Park in Arenastaden is the second of the three activity parks that will be built in Solna, and will be a welcome feature among the impressive building facades around Arenatorget.

“With a Pep Park in Arenastaden, more children, young people and adults in Solna will have even better opportunities for play and daily exercise together, all year around,” says Pehr Granfalk, Chairman of the Municipal Executive Board in the City of Solna.

During the autumn of 2019, the first Pep Park “100 meter Pep” was opened in Huvudsta. It was built in a leafy green area, incorporating more traditional elements of exercise such as a balance beam and running track. Unlike the first park, the challenge in Arenastaden has been to transform a barren tarmac-covered area in a well-frequented urban environment into an inspiring place. The park mostly consists of ground paintings, which are inspired by computer game graphics, with perspectives that create playful 3D effects.

“We wanted to move the digital world, where many young people spend so much time in, out into reality. We have chosen to create a park which triggers the imagination of the person who visits it,” says Sam Keshavarz from Outer Space arkitekter, which are behind the design of the park.

Under the current circumstances, we chose to record a film in order to launch the park instead of arranging an official opening. Carolina Klüft, Operations Manager at Generation Pep also participated in the production of the film, and along with her we are happy and proud to be able to welcome you to our new Pep Park.

Fabege is a property company focusing on city district development and commercial properties. We develop attractive and sustainable districts with modern offices, housing and a broad range of services - together with strategic partners. Both our perspective and approach to ownership are long term and our passion is creating the right conditions for all those living, working and visiting our areas. We have a presence in a limited number of high-growth submarkets in the Stockholm region. Fabege’s shares are listed on Nasdaq Stockholm, in the Large Cap segment. For more information,  www.fabege.com