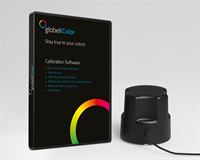 globellColor’s Kickstarter campaign at http://kck.st/29EiDWg has raised more than $55,000, surpassing its target. As a thank you, the manufacturer is expanding its color management solution to include versions in French and Spanish.Tegelen/Netherlands August 5, 2016 – globellColor’s global Kickstarter campaign at http://kck.st/29EiDWg has reached its funding target several times over, raising $55,000. To mark this milestone, the manufacturer has announced plans to provide the solution in French and Spanish alongside existing English and German versions. The campaign’s next target is to