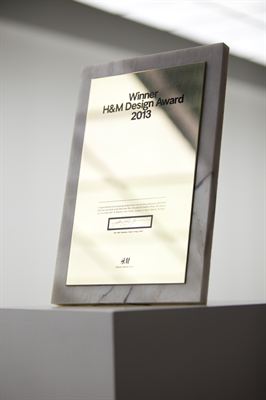 H&M is proud to announce the names of the eight finalists of the H&M Design Award 2013. The finalists, invited to take part from nineteen design schools in Europe, were selected by an H&M jury led by Ann-Sofie Johansson, H&M’s Head of Design. Each wins €5,000, and a place in the final, presided over by a grand jury of fashion experts. The winner will receive a prize of €50,000, and the chance to show his or her collection at Mercedes-Benz Stockholm Fashion Week on January 29, when the winning name will be revealed. The winner will also develop selected pieces from his or her collection to be sold in selected H&M stores this autumn.

“I’m so excited by the finalists of this year’s H&M Design Award. The standard of entry was so high, with such creativity, energy and attitude. We started the H&M Design Award to help move fashion forward, and to celebrate and support graduates as they begin their careers. I can’t wait to see what all of our finalists will do in the future,” says Ann-Sofie Johansson, H&M’s Head of Design.

ALBA PRAT (Germany): 31-year-old Alba from Barcelona has lived in Berlin for seven years, where she studied at the Universität der Künste. Her collection “syn chron” uses the visualisation of sound phenomena, basing her prints on two different visualised recordings of her own heartbeat.

ELEONORA BRUNO (Italy): Eleonora Bruno, who studied at Polimoda in her native Florence, is a 25-year-old who has expanded her work beyond hats to include full looks. Her collection, “Le Vie De Madame Roy”, creates imagined outfits for a woman in Paris.

ERIK LITZÉN (Sweden): Stockholm native 26-year-old Erik Litzén, who studied at the city’s Beckmans College of Design, is interested in plays with gender. His collection, “P-Androgeny”, uses draping and volume to create tailoring that goes beyond the normal bounds of menswear.

MAIA BERGMAN (United Kingdom): Maia Bergman, a 24-year-old born in Buenos Aires but now based in London, studied for her BA at Central Saint Martins. For her collection, she took simple, wearable silhouettes, and created contrast by decorating them with intricate embellishment.

MARK KENLY DOMINO TAN (Denmark): Mark Tan, a 26-year-old from Ry studied at DSKD in Kolding. His collection looks at the relationship between the body and wood, foam and plaster. Mark first made films, then translated these visual movements, shapes and colours into his high-tech collection.

MINJU KIM (Belgium): 26-year-old Minju Kim is originally from South Korea, and is now in her master’s degree year at the Royal Academy of Fine Arts in Antwerp. Minju’s collection is inspired by Manga, based on sketches of her friends transformed into fantastical creatures.

THOM BARENDS (Holland): Thom Barends is a 23-year-old from Amsterdam, who studied at ArtEz in Arnhem. His collection looks at present day society, and imagines a woman who ends up on the streets with nothing but her mother’s ‘80s clothing.

H & M Hennes & Mauritz AB (H&M) was established in Sweden in 1947 and is synonymous with affordable as well as up-to-date and high quality fashion. H&M has a wide product range that is divided into a number of different concepts for women, men, teenagers and children. The company’s clothing collections are created by its own designers, pattern makers and buyers. H&M has more than 94,000 employees and around 2,800 stores in 48 markets, including franchise markets. For further information visit hm.com.

H & M Hennes & Mauritz AB (publ) was founded in Sweden in 1947 and is quoted on Nasdaq Stockholm. H&M’s business idea is to offer fashion and quality at the best price in a sustainable way. In addition to H&M, the group includes the brands COS, Monki, Weekday, Cheap Monday, & Other Stories, H&M HOME and ARKET as well as Afound. The H&M group has 47 online markets and more than 4,900 stores in 72 markets including franchise markets. In 2018, net sales were SEK 210 billion. The number of employees amounts to more than 177,000. For further information, visit hmgroup.com.