TOURISM AWARD IS MUSIC TO THE EARS OF FESTIVAL ORGANISERS 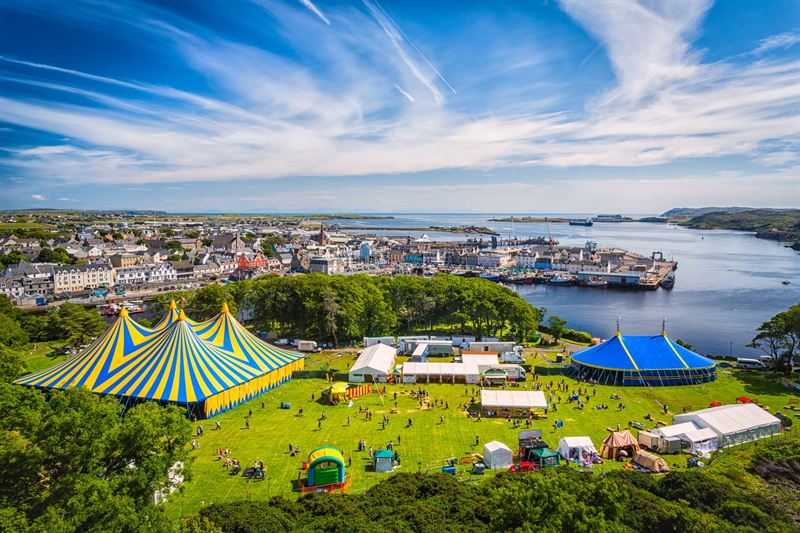 The festival has won the Best Event or Festival category at the annual Highlands and Islands Tourism Awards held (Friday 7 November).

HebCelt, an annual four-day event which was held from 16-19 July in Stornoway, now automatically becomes a finalist at the Scottish Thistle Awards 2015, along with the front-runners from the North East, Central South East and Central South West areas of Scotland.

HebCelt, which will mark its 20th anniversary next year, has a major economic and cultural impact on Lewis and the wider islands community. It is a passionate supporter of the Gaelic language and of young, emerging talent as well as traditional music.

This year’s festival staged its biggest ever programme of 40 acts, headlined by Big Country, Levellers and Donnie Munro. A huge influx of music fans from overseas made up half the estimated 14,000-strong audience which provided a major economic boost for the islands.

The figure was close to last year’s record-breaking attendance and almost 17 per cent up on 2012.

Caroline Maclennan, the festival director, said: “Winning this major award is another major achievement in what has been a very rewarding year.

“Recognition of this nature is a fitting tribute for the all the hard work done by an army of volunteers who help ensure HebCelt continues to grow and thrive. It also emphasises just how crucial our funders, sponsors and supporters are. They are enormously important to this vital event's success.

"Our thanks also go to the judges of the Highlands and Islands Tourism Awards. The awards event was tremendous with a wide variety of incredible nominees. We are grateful to have been selected as winners when the competition was so tough."

Earlier this year HebCelt was selected as one of the top 10 UK summer festivals for the fourth year in succession by influential publication Songlines.

In 2011 it was ranked Best Large Festival at the industry-sponsored Scottish Event Awards and it won Best Event of the Year award at the MG Alba Scots Trad Music Awards in 2004 and 2009.

The 19th HebCelt will be held between 16-19 July, 2014 and will have two main stages on the Castle Green in front of the Lews Castle in Stornoway, as well as performances in An Lanntair and throughout the rural community. The 2013 HebCelt was the most successful in its history with ticket sales up by more than 30%. Just over half the 16,000 festival-goers came from outside the Hebrides and the huge influx of visitors from across Europe, the US, Australia and New Zealand, helped generate around £1 million for the local economy. Last year HebCelt was hailed as one of the greenest festivals in the world and was the only Scottish festival to receive an outstanding award from environmental campaign group A Greener Festival. It was also shortlisted in the Greener Festival Category in the UK Festival Awards. In addition to this, it was selected for the third year in succession as one of the top ten UK summer festivals by music magazine Songlines and was shortlisted in the Best Independent Festival category in the AIM Independent Music Awards.