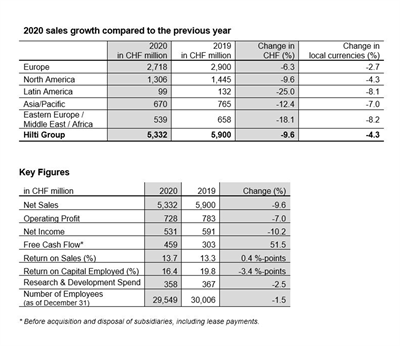 Schaan (FL), March 18, 2021 – The Hilti Group closed the challenging COVID-19 pandemic year of 2020 with a decline in sales of 9.6 percent, totaling CHF 5.3 billion, and an operating profit of CHF 728 million (-7,0%). Nevertheless, investments in strategic initiatives continued as planned to ensure the long-term success of the company.

“2020 was a turbulent business year which also shows in our figures. Overall, we came through the pandemic year with a black eye and were able to avoid compromising the financial stability of our company. At the same time, we continued to invest into our strategic priorities," comments CEO Christoph Loos on the annual results.
While the decline in sales was most pronounced over the first five months of 2020, the situation improved from June onwards, ultimately leading to a 9.6 percent drop in sales in Swiss francs and 4.3 percent decline in local currencies. The negative currency effect, of over 5 percent, was the result of significantly depreciating currencies in the growth markets and the weaker euro and US dollar.

Developments in the regions varied greatly, strongly influenced by the duration and extent of local lockdowns. In local currencies this resulted in only a slight overall decline in sales of 2.7 percent in Europe. There was a clear north-south divide, with growth in Scandinavia and Central Europe and upper single-digit declines in Southern Europe. North America was also quite robust, with a local decrease of only 4.3 percent. Significant reductions were recorded in the Eastern Europe / Middle East / Africa region (-8.2%), Latin America (-8.1%) and Asia/Pacific (-7.0%), with major differences from country to country.

At the end of March 2020, Hilti launched a four-pillar program to cope with the COVID-19 impact. A strong emphasis was put on protecting the health and well-being of all employees, particularly those with direct customer contact. Additionally, a hiring freeze was imposed, indirect costs were optimized, and temporary savings measures were implemented. At the end of the year the number of team members stood at 29,549, a decrease of 1.5 percent compared with the previous year. Hilti adjusted its structures only very selectively in certain markets and avoided a more extensive restructuring.

Despite the pandemic, the Hilti Group launched 74 new products and services onto the market. Expenditures for research and development reached CHF 358 million (-2.5%), a share of 6.7 percent of sales.

The operating profit decreased by 7.0 percent to CHF 728 million, while net income declined to CHF 531 million (-10.2%). Despite the decline in sales, the negative currency effect and ongoing investments, the return on sales (ROS) grew slightly and reached a new high of 13.7 percent. By contrast, the return on capital employed (ROCE) decreased by 3.4 percentage points to 16.4 percent due to the lower capital turnover. This was caused by a combination of the buildup of a higher liquidity reserve, the implementation of IFRS 16, a negative currency mix of the capital employed and lower sales.

For the current year, the Hilti Group expects a moderate economic recovery, which will vary from region to region and depend heavily on the course of the coronavirus pandemic in the coming months. Despite these challenges, the company is adhering to its strategic objectives and will continue to invest significantly in innovative solutions and the digitalization of its portfolio and its internal processes. The Hilti Group expects sales growth in local currencies in the upper single-digit range, a continued significant negative currency effect and a profitability at about the same level as before COVID-19.

At Hilti we design and manufacture leading-edge technology, software and services, which power the professional construction industry. We’re global, based in over 120 countries with more than 30,000 employees. Everyday our technologies support awe-inspiring feats of engineering around the world – from the famous bullet train in Japan to tunnels deep under some of the largest cities on earth. We offer a 360-degree service for the construction industry – from design software, products and tools onsite to training, repairs, testing and consultancy. We’re a one-stop shop for building, worldwide.

Hilti generated annual sales of CHF 5.9 billion in 2019. The headquarters of the Hilti Group have been located in Schaan, Liechtenstein, since its founding in 1941. The company is privately owned by the Martin Hilti Family Trust, which ensures its long-term continuity. The Hilti Group’s strategic orientation is based on a caring and performance-oriented culture and the goals of creating enthusiastic customers and building a better future. 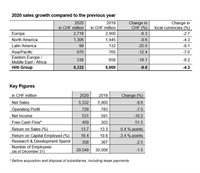