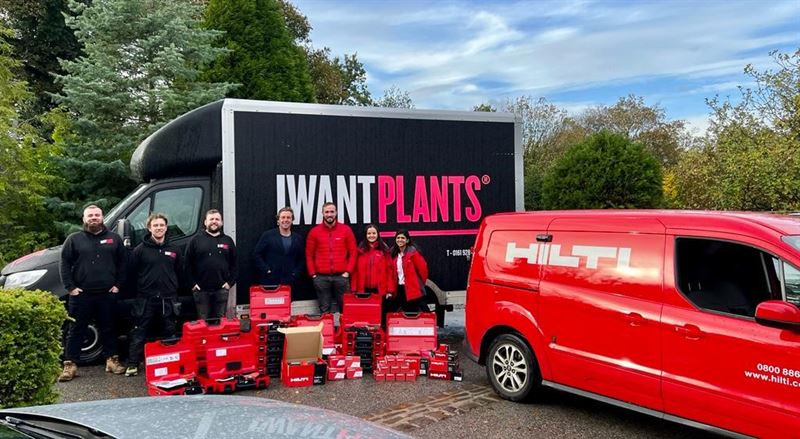 Speaking on the partnership, Managing Director of I Want Plants, Richard Rowlands, said: “For our HYVERT product to stay superior, we need to use superior supporting equipment, so it’s with great pride that we announce a new business partnership with Hilti (GB).

“Every HYVERT living wall we install is subject to a prior assessment of the surface to be covered,  whether it be concrete, brick or an internal partition-wall.  We have hypothesized all likely surfaces with Hilti, and they have recommended the most appropriate tools, fixtures and fittings for each scenario.

“Hilti is an instantly recognisable brand name when it comes to construction tools and equipment with an international reputation for quality and durability. Investing heavily and exclusively using Hilti products was an easy decision for us to make.”

Shane Dixon, Project Specialist at Hilti (GB), added: “At Hilti we like to do things differently, creating technologies, software and services which clearly stand out from the rest.  They’re values shared by I Want Plants.

“This partnership builds on the synergy between the two family-owned, progressive businesses.  We’re proud to join forces with I Want Plants to install its world-class HYVERT living walls and biophilic displays, and to work together to transform UK cities into sustainable green spaces.”

The news follows I Want Plants’ appointment by Hilti to install a HYVERT living wall at the business’s impressive new UK head office at Circle Square, Manchester.  The new office aims for additional BREEAM accreditation on top of the base build, with the HYVERT living wall part of Hilti’s wider business focus on sustainability and the environment.

Established in 1974, I Want Plants is one of the UK’s leading independent suppliers of horticultural and biophilic displays. The company works alongside some of the country’s most influential interior designers to create displays which can be seen at a wide range of venues from offices, restaurants, hotels and supermarkets.

Earlier this month the business announced it has been awarded a Knowledge Transfer Partnership (KTP) from Innovate UK.

The six-figure grant, to be matched by the leading independent company, has been secured to support I Want Plants in developing a new sector leading scientific capability within the company to demonstrate the effectiveness of its HYVERT walls – living green walls designed, grown and built in Manchester – in improving urban environments.

The business will, together with Manchester Metropolitan University, one of the UK’s greenest universities, scientifically quantify exactly how much CO2 and NO2 gases HYVERT is able to remove from the atmosphere.

I Want Plants is headquartered in the Cheshire countryside.   The office barn is set on a four-acre field, which includes a nursery for HYVERT production as well as storage for Custom Installation and aftercare teams. The heat regulated hothouses hold a stunning collection of tropical plants.  An impressive showroom features live and artificial signature displays, handcrafted containers and show stopping trees.

The Hilti Group supplies the worldwide construction and energy industries with technologically leading products, systems, software and services. With 30,000 team members in over 120 countries the company stands for direct customer relationships, quality and innovation. Hilti generated annual sales of CHF 5.3 billion in 2020. The headquarters of the Hilti Group have been located in Schaan, Liechtenstein, since its founding in 1941. The company is privately owned by the Martin Hilti Family Trust, which ensures its long-term continuity. The Hilti Group’s strategic orientation is based on a caring and performance-oriented culture and the goals of creating enthusiastic customers and building a better future.