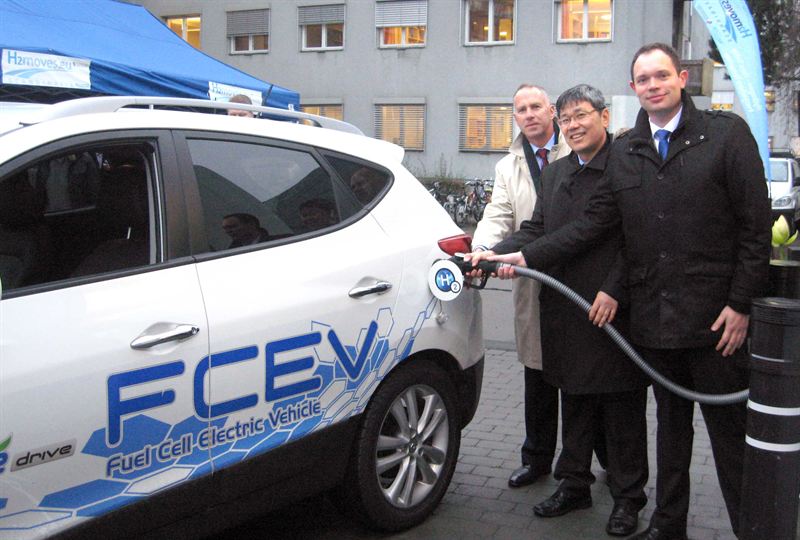 Hyundai has joined ‘H2moves Scandinavia’, the first ‘Lighthouse Project’ of the European Commission-backed Fuel Cells and Hydrogen Joint Undertaking (FCH JU), agreeing to demonstrate fuel cell electric vehicle (FCEV) technology in the northern European countries of Norway and Denmark. As part of the project, Hyundai will make available its ix35 FCEV for test drives in Oslo, Norway, this week, following the official opening today of a hydrogen refuelling station in the Norwegian capital.

At the official opening ceremony of the hydrogen refuelling station, Hyundai joined fellow H2moves Scandinavia project partners – including Daimler, H2 Logic, SINTEF, LBST and HydrogenSweden–in addressing attendees on the benefits and real-world viability of hydrogen technology. The focus of the H2moves Scandinavia project is to further increase public awareness of fuel cell technology and develop the infrastructure to support commercialization of fuel cell vehicles.

Following this week’s test drives inOslo, two ix35 FCEVs will be available inNorway, operated by Zero and HyNor. These organizations will use the vehicles on a daily basis, providing driving experiences for public and policy makers for a better understanding of fuel cell technology. Another two ix35 FCEVs will be made available inDenmark, operated by Hydrogen Link and the Danish Partnership for Hydrogen and Fuel Cells. The harsh Nordic climate will provide an ideal environment for testing the suitability of hydrogen-powered vehicles in adverse weather conditions – the ix35 FCEV can reliably start in temperatures as low as minus 25 degrees Celsius.

The ix35 FCEV is also equipped with a 100 kW (136 hp) fuel cell stack and two hydrogen storage tanks with a total capacity of 5,64 kg, enabling the vehicle to travel a total of 525 km (NEDC mode) on a single charge, emitting only pure water. Maximum speed is 160 kph.

Allan Rushforth, Senior Vice President and COO of Hyundai Motor Europe, said: “Hyundai is committed to exploring a number of alternative energy solutions that will contribute to a sustainable future for the auto industry. We believe hydrogen-powered vehicles will have an important role to play, so we are delighted to partner with like-minded organisations on the H2moves Scandinavia project. Test drives of the ix35 FCEV will provide valuable feedback from ordinary motorists on real-world driving impressions of FCEVs.”

“Another important consideration is the establishment of an infrastructure which supports ownership of fuel cell vehicles. The state-of-the-art refuelling station inOslowill serve as a benchmark for the industry,” Allan Rushforth added.

The ix35 FCEV is based on the award-winning ix35 compact SUV – a car designed, engineered and manufactured at Hyundai’s facilities inEuropespecifically for European motorists.

Established in 1967, Hyundai Motor Co. has grown into the Hyundai Motor Group which has ranked as the world’s fifth-largest automaker since 2007 and includes more than two dozen auto-related subsidiaries and affiliates. Hyundai Motor, which has six manufacturing bases outside ofSouth Korea, sold approximately 3.6 million vehicles globally in 2010. Hyundai vehicles are sold in 186 countries through some 5,300 dealerships and showrooms.

In 2010, Hyundai achieved record sales inEuropeof 362.000 units, taking a best-ever 2,6% market share.  In May 2011, Hyundai achieved a landmark, passing 5.000.000 sales inEuropesince imports began in 1977.  The company designs, engineers and manufactures cars inEurope, specifically for European customers.  This includes the i30, which performed as Hyundai’s top-selling model in 2010, with 120.000 units sold.  Hyundai sells cars in 28 European countries across 2.500 outlets.

Further information about Hyundai Motor and its products is available at www.hyundai.com.

About the project H2moves Scandinavia

The aim of the project H2moves Scandinavia is to accelerate the market introduction of FCEVs. By operating several FCEVs in Scandinavia and having built a new hydrogen refuelling station inOslo, the broad public is introduced to this technology, which is on the edge to full commercialization. In summer 2012, H2moves Scandinavia will perform a road tour throughEuropeto showcase the vehicles together with a transportable hydrogen refuelling unit specially developed for this tour.

This project is supported by the European Fuel Cells and Hydrogen Joint Undertaking (FCH JU) Programme. FCH JU was officially launched by the European Commission in October 2008, H2moves Scandinavia is the first FCH JU funded European Lighthouse Project (LHP). The total budget is € 20 million of which € 7,8 million are public support from FCH JU. Additional support is provided by both Danish and Norwegian national funds and from the involved industry partners.

Established in 2003 with the HyNor is organized in local projects and cooperates both on a common infrastructure as well as on the acquisition of cars and buses for the project as a whole. The project is funded by private companies, station and cars owners and local, regional and central public institutions.

HyNor unites a long list of national and regional companies, research institutions, NGOs and authorities in order to provide a local effort for the establishment of a common hydrogen infrastructure. Thus HyNor becomes the driving force for the preparations for hydrogen as a fuel in road transport in Norway, and it is a testbed for demonstration projects leading up to a mass market introduction of hydrogen vehicles.

ZERO is an environmental organisation. We are not consultants, the battle against climate change being our only mission. However, we participate in partnerships financed by third parties.

ZERO is the only Norwegian environmental organization solely committed to fighting climate change. We never accept the use of fossil fuels without carbon dioxide burial.

As environmentalists, we demand thatNorwaycut carbon emissions by a minimum of 90 per cent. Still, ZERO’s role is to be constructive and pragmatic, cooperating even with big polluters, if it can help obtain our goals.

We do not believe in moralization. Rather than urging people to reduce their standard of living, ZERO advocates solutions that enable people to maintain their current way of life.

Hydrogen Link is an association working to advance the use of hydrogen and fuel cells for transport inDenmark.