Hyundai Motor Company, whose joint venture in China is celebrating its 10th anniversary this year, today unveiled its China-exclusive Elantra (“Langdong,” or 朗動 in Chinese) and its all-new Santa Fe at the 2012 Beijing International Automotive Exhibition, held at the China International Exhibition Center.

Langdong, which can be translated as a “dynamic (car) for the young, new generation,” is based on Hyundai Motor’s best-selling and multi-award winning Elantra that has captured the hearts of customers worldwide. Together with its new third-generation Santa Fe, Hyundai aims to boost its mid- to large-sized vehicle offerings in China and raise its brand image.

“A decade ago, Hyundai was known for making only small cars. Today, our Equus and Genesis* luxury cars compete with the best vehicles that Europe can make,” Seung-Tack Kim, Executive Vice President & COO of Hyundai Motor’s Global Business Division, said in Beijing today. “Ten years ago, we were a follower in the auto industry. Today, we are a leader – and ready for the future.”

* Badged as Rohens in China.

Langdong, which will be produced at Hyundai’s new, third plant in Beijing in the second half of this year, is expected to accelerate the upward momentum for Hyundai in the world’s largest auto market. Beijing Hyundai Motor Co. (BHMC), Hyundai’s joint venture in China, is currently building a third plant, which will raise its maximum production capacity to one million units.

Langdong is based on a design concept called Wind Craft that is part of Hyundai’s larger design philosophy of Fluidic Sculpture, which has been applied to the company’s entire lineup since 2009. The aggressive front-end design of Langdong, with its wraparound headlights, creates a feeling of motion and strength. The streamlined character line on the side volume sweeps back dramatically toward the rear, giving the entire vehicle the appearance of having been crafted by the wind.

Langdong is a compact car with the feel of a larger car. With an overall length of 4,570 mm, width of 1,775 mm, height of 1,445 mm and a wheelbase of 2,700 mm, Langdong is larger than its competitors. This means Langdong provides consumers with the convenience of a compact car but the practicality and comfort of a mid-sized car.

Driver safety is a high priority for Hyundai. Langdong, which has received the highest safety ratings from government agencies in Europe and the U.S., has a series of active and passive safety features including side air bags, an emergency brake reminder and a tire pressure monitoring system, to name a few.

Hyundai will introduce its advanced Blue Link infotainment system to Langdong. Blue Link offers a wide variety of features such as safety and maintenance alerts, navigation and remote control, all with minimum driver distraction. Starting from the first half of this year, Hyundai plans to expand its lineup of cars in China that offer the Blue Link service.

Also at Beijing, Hyundai unveiled its all-new Santa Fe, which made its world premiere at the 2012 New York International Auto Show this month. The new Santa Fe showcases the brand’s cutting-edge capabilities through its new design, impressive fuel economy and a host of advanced features.

The exterior of the Santa Fe invokes the impression of irrepressible motion through its own design concept called Storm Edge, which captures the strong and dynamic images created by nature during the formation of a storm. The futuristic and urban-style design, with its bold hexagonal front grille, lets people know immediately that Santa Fe is a Hyundai.

Hyundai believes the all-new Santa Fe, which will begin sales in China in the second half of this year, will be a great answer to families with two or more kids that seek the size, flexibility and capability of a crossover at the same time. 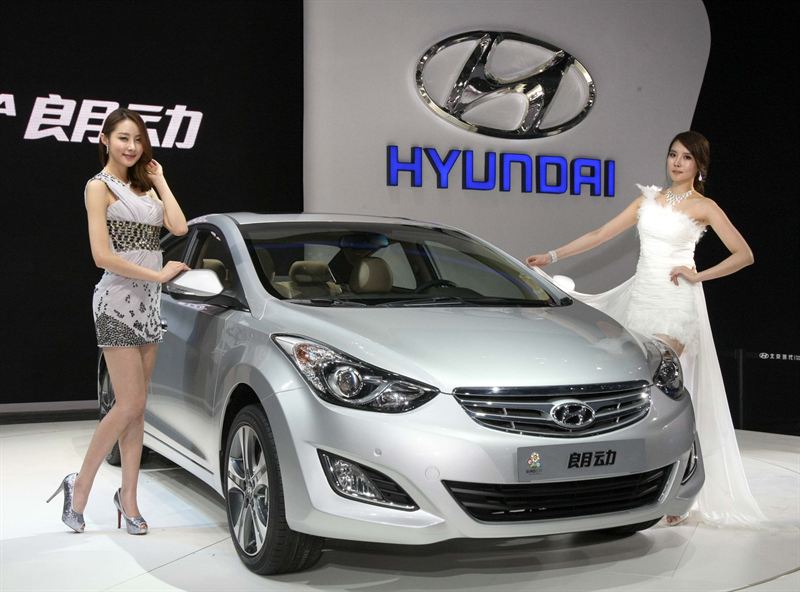 Established in 1967, Hyundai Motor Co. has grown into the Hyundai Motor Group, with more than two dozen auto-related subsidiaries and affiliates. Hyundai Motor -- which has six manufacturing bases outside of South Korea including the U.S., China, India, Russia, Turkey and the Czech Republic -- sold 4.06 million vehicles globally in 2011. Hyundai Motor, which employs over 80,000 worldwide, offers a full line-up of products including small to large passenger vehicles, SUVs and commercial vehicles. Further information about Hyundai Motor and its products is available at www.hyundai.com.