PEOPLE OF LANCASHIRE TO STAR IN TV AD 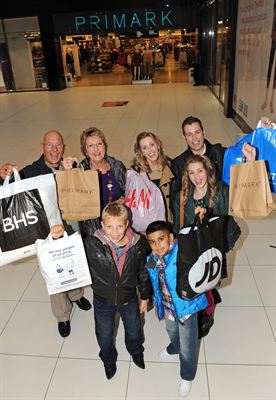 A county-wide talent search led to people from across Lancashire landing starring roles in The Mall Blackburn’s first ever television advert.

The chosen few will become a fictional group of family and friends for the advert and will also strut their stuff on the catwalk at the fashion shows that are set to take place throughout The Mall’s official launch day on Saturday 24th September, which will celebrate the completion of the £66m development.

Real life mother and daughter Jenette and Jessica Ingham from Burnley will play the same roles on screen with 11 year old Matthew Regan from Preston as the brother and eight year old Ibrahim Zafar from Blackburn as the brother’s friend.

Margaret Goulding and Alan Shelton, from Blackburn and Darwen respectively, complete the family playing the parts of the grandparents.

Ali Afzal, also from Blackburn, will feature in the fashion show after wowing judges at the open auditions day that was held in August.

Filming took place on Monday 12th September at The Mall and the advert will air in the Granada region from Monday 10th October.

Loraine Jones, General Manager at The Mall Blackburn, said: “Our first television advert is part of a huge campaign to show people how fantastic The Mall Blackburn really is after massive investment and improvement in recent years.

“It was very important to everyone here at The Mall that the advert would be a true reflection of Lancashire, so we took the decision to involve our shoppers and invite them to open auditions, which took place in August.

“We had hundreds of entries and it was really difficult to choose the winners. After much deliberation between the judges we can safely say we have the perfect people for the job!

“The filming was great fun and everyone really enjoyed it. We are very much looking forward to seeing the final results on the small screen in October.”

Picture shows: Group shot of those that will appear in the TV advert. Please click on below link to download image.