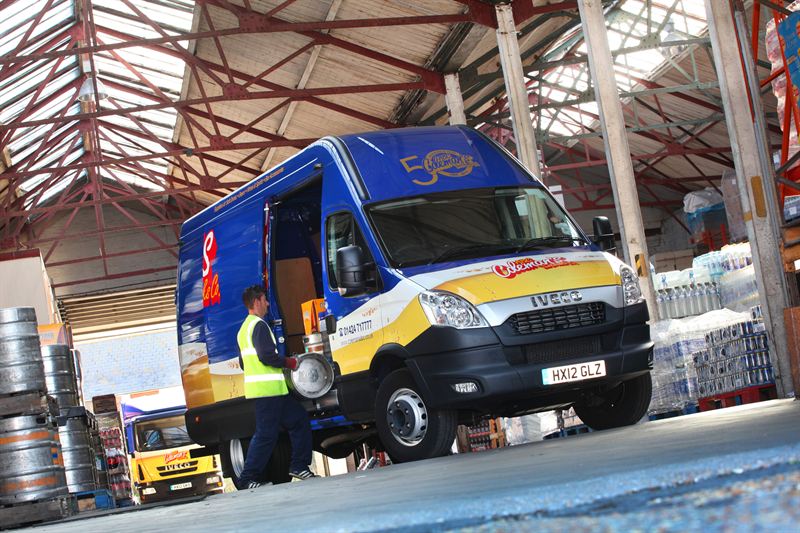 East Sussex-based drinks wholesaler Coleman’s ABC has replaced half of its commercial vehicle fleet with new Ivecos, including two 12 tonne rigids built onto Iveco’s special ‘EL’ low height chassis and supplied by Hendy Van & Truck.  They are joined in the 10-strong fleet by a new Daily 70C17 and two Daily 35C15 vans.

The specialist low-height urban distribution vehicles are built on the regular Eurocargo production line but give an overall height more than 75mm lower than the standard model, which combined with its ‘one-step’ entry design, significantly eases access to the cab and body.  To achieve this lower frame height, the side-members are shallower by 45mm and the frame itself is carried on 17.5 inch rather than 19.5 inch wheels and tyres.

“Whenever we procure new vehicles we evaluate a range of different models, to ensure we are buying the best asset for our specific needs,” explains Dan Coleman, Sales Manager and third-generation in the family firm.  “On this occasion the Ivecos were up against competitive products from three other marques, but the Eurocargo 120EL22s won hands-down in terms of payload capacity and chassis height.

“The 12 tonners can make up to 40 drops a day and payload is critical.  The low chassis height is making deliveries easier than ever before; we wish we’d specified this truck as standard in our fleet years ago.”

Commenting on the Daily’s performance, Coleman adds: “Our delivery routes take us up some steep hills which our previous vehicles had to take in first gear.  In contrast, the Dailys are gliding up the same inclines in third.  Engine performance is first class; it’s as if the vehicles don’t know when they’re carrying maximum weight.”

The two Eurocargos have been mounted with bespoke lightweight aluminium ‘curtainslider’ bodies manufactured by Solent Bodybuilders.  Strong net curtains inside the body ensure the payload is retained securely when opening and closing the curtains, for maximum driver safety.  The bodywork is notable for its lack of rear doors and a tail-lift – both key to achieving the maximum legal payload.

The Dailys – including both 3.5 tonners – are specified with twin rear wheels to ensure maximum strength and a truck-like driving experience.  A class-leading turning circle ensures both Daily models can manoeuvre within narrow urban streets whilst carrying out deliveries to pubs, clubs, restaurants and shops throughout Kent and Sussex.

Coleman’s ABC has been trading for half a century and expects the Eurocargos to remain on its fleet for at least the next five years, and the Dailys for three years.  Both models will cover up to 40,000 km a year, with servicing undertaken at Hendy Van & Truck’s dealership in Hastings.

They will be on the road six days a week, carrying a full range of soft drinks, alcohol and cellar gas refills for the company’s extensive customer base.

Iveco employs almost 25,000  people and runs in 11 Countries in the world using excellent technologies. The company operates in Europe, China, Russia, Australia and Latin America. Around 5,000 sales and service outlets in over 160 Countries guarantee technical support wherever in the world an Iveco vehicle is at work.